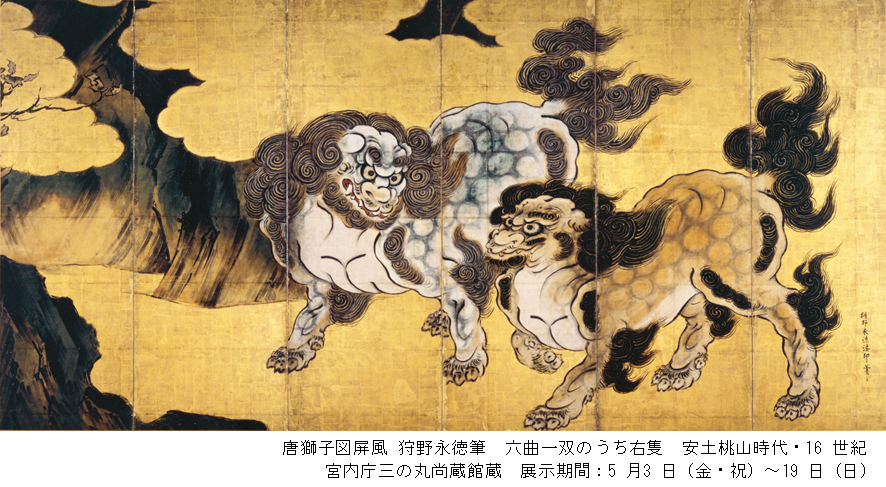 The Tokyo National Museum will hold a special exhibition "Prestigious items of Japanese art spinning beauty – Sesshu, Eikoku to Karin, Hokusai -" on May 3 (Friday) – June 2 (Sunday) 2019 We announced that.

This exhibition is to be held as part of 'Spinning project' to protect and convey Japanese beauty – National Treasures of Imperial Families / National Treasure Project ', organized by the Tokyo National Museum and the Agency for Cultural Affairs, with the cooperation of the Imperial Household Agency of the Imperial Housekeeper , It is a thing which introduces selected goods of Japanese art.

In Kano Kagakuko, in addition to opening the "Karon Lion Screen Painted Wind" which is a masterpiece of the Imperial Family, and the National Treasures "Hinoki Figure Folding Screen" with great masterpieces of Yongdeok and his later, divided into the first half and the second half of the session, It will be an exhibition introducing the masterpieces of Ogata Korin, Katsushika Hokusai et al. In one place. 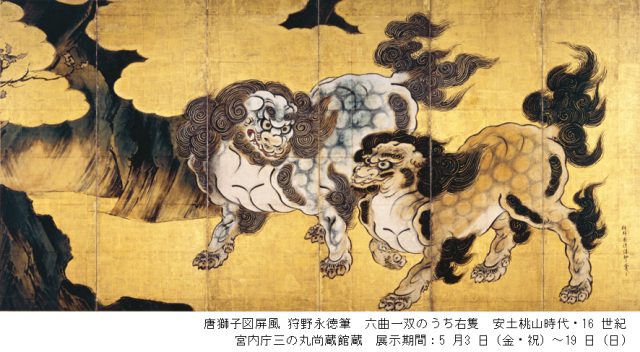 Eikichi Kano (1543 – 90) is a representative painter of the Kano school which played an active role in the Azuchi-Momoyama period, and its brave style is noteworthy among Japanese art history. The representative masterpiece "Karate Lion Screen Screen" is a particularly large piece that is also called a former castle on the floor or Jinya folding screen. In the Edo period, Shinkansen, who is a great grandson, supplemented the same screen on the left and was told as a folding screen.

A completely different style of both are also interesting.

One of the golden age paintings of the Momoyama era, in the work of the longest year of Kano Koin. Toyotomi Hideyoshi who got a true child / Tsurumatsu (abandon) of a wish in the 17th year of Tensho (1589) resolved the relationship with Emperor Tachimi's grandchild and Tomohito the king who had been a boy the following year and founded Hachijyo Miya instead Then I made the gods built.

A part of the barrier painting drawn by Yoshinori Kano for that god is this cypress figure. Currently it has been renovated to a screen, but the vigorous expression of Eikin, which was said to be "like a big snake is not lost". It was handed down to Miyauchi Province after being reported to Oshiya Palace, the back of the Hachijyo Palace, and transferred to the Imperial Museum (currently the Tokyo National Museum) during Taisho era. 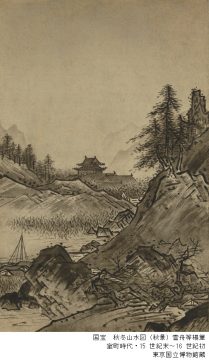 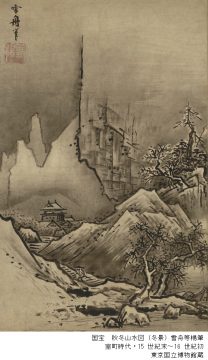 This work consists of autumn scenery that reveals the distant castle tower from the shore before the deciduous tree, through the mountain path of the zigzag, under a huge cliff that stands out, one person who steps through the snowy mountain path It consists of winter scenery depicting a traveler.

In this figure, by arranging the rocky mountains from near to far, the deep space is expressed, and the constructability which was not seen in the Japanese ink canvas painting before Sesshu is clearly shown.

Nagasawa Ashiyuki was active in the middle of the Edo period and is known as the disciple of Maruyama Election. It is positioned as "a fantasy painter" together with Soga Ji Haka and Itaku Jakuchu, and has earned high praise.

This work is a picture scroll that draws familiar animals and plants with skillful brushstrokes. The poetical rich depiction can be said to be one of the most beautiful flowers in the modern era. 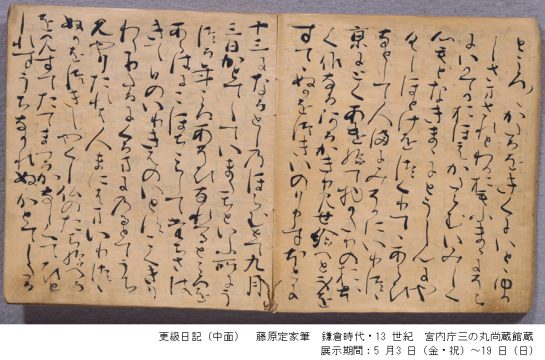 A recollection by a daughter of Mr. Fujiwara Kakuta, a woman from the middle-aged nobility of the Heian era, is written from the girls' era when reputation was written with "Genji Monogatari" written, until the last years preceding her husband. 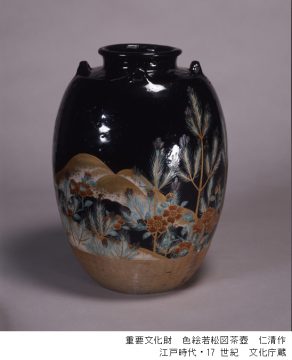 Ninba is from Tamba (now part of Hyogo Prefecture) and is a famous potter who is famous as an otaku of Kyo-yaki.

This tea jar is covered with shiny black glaze called Ninba black, the part of the soil is regarded as Tongpo, the mountain range is represented by gold, and the picture of Wakamatsu, Tsubaki etc. using red, green and gold and silver are shown It is arranged rhythmically. Sanuki country (now Kagawa prefecture) It has been introduced to the Marugame lord Kyogokin.

Outline of the exhibition 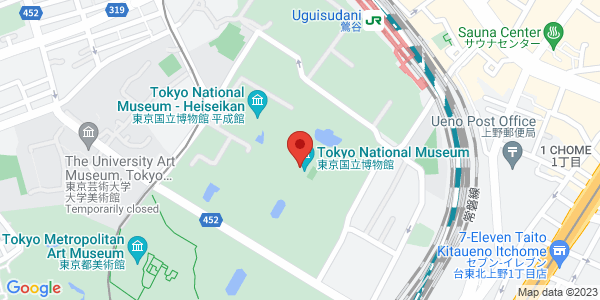