I went to the "Gaidai Collection Exhibition 2020-Chronicle" which is being held at the University Art Museum, Tokyo University of the Arts in Ueno, Tokyo from September 26, 2020!

Have you all been there yet?

In this article, we will report on the contents and highlights of this exhibition.

What was particularly wonderful was the self-portraits of the former students, which were lined up all around the exhibition room, and more than 100 of them!

Those who were active in the art world in later years, those who died at a young age despite their talent. It was a very spectacular exhibition where you can compare and enjoy the self-portraits that were projected in various ways, such as the self-consciousness and hobby interests of each student at the time. 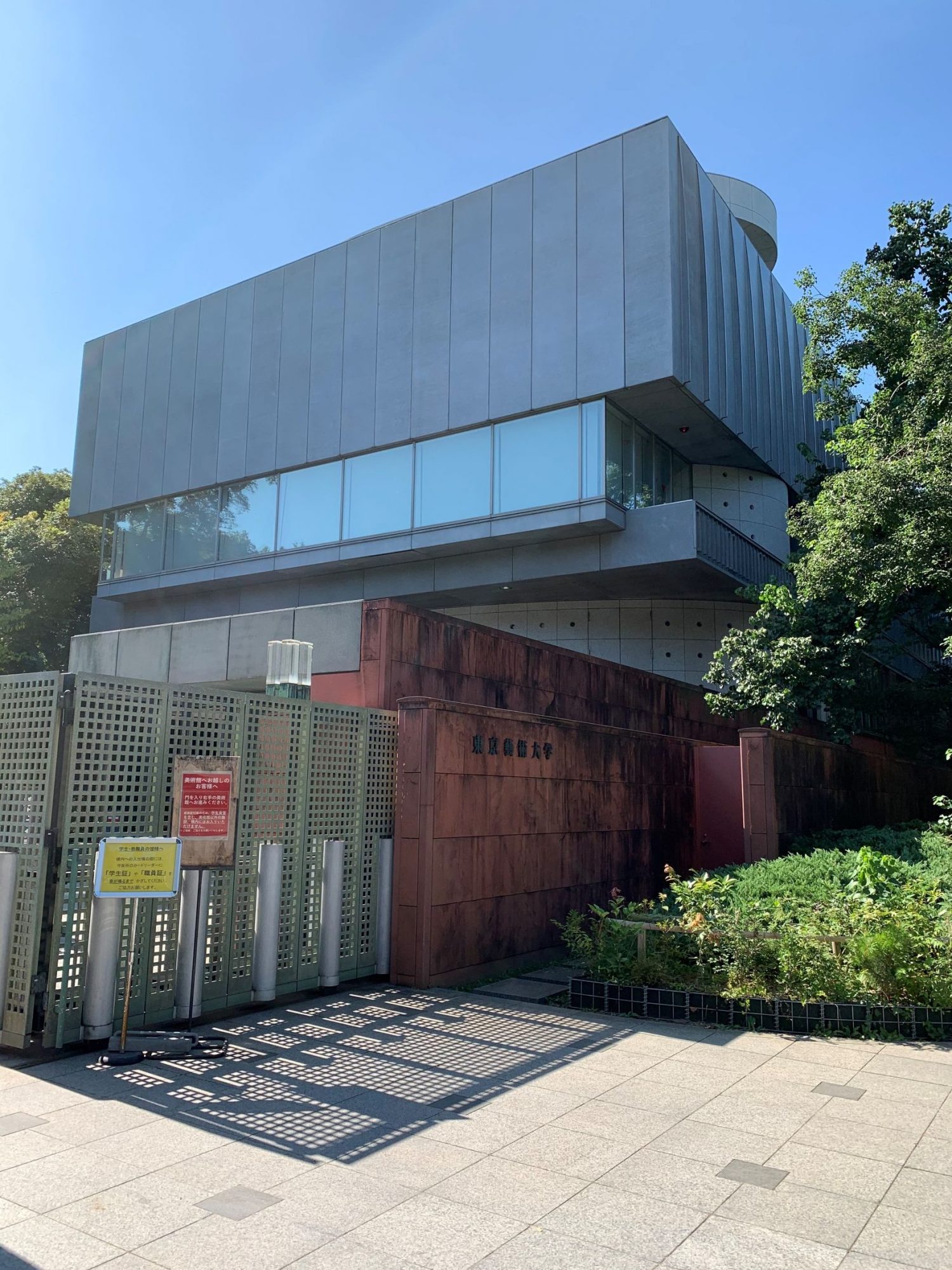 What kind of exhibition is the "Tokyo University of the Arts Collection Exhibition"?

Approximately 30,000 collections are stored in the University of the Arts Museum, including works purchased by people as educational and research materials for students, works by Kiyoteru Kuroda, Taikan Yokoyama, and successive faculty members, current students, and graduates. It goes up to the point.

With the theme of tracing the history of Tokyo University of the Arts from a variety of art works like a chronicle, more than 150 works centered on paintings are exhibited.

This time, in order to enjoy the exhibition more deeply, I visited with Mr. Nagatomo, a curator researcher, explaining. Mr. Nagatomo, thank you for your cooperation in your busy schedule. 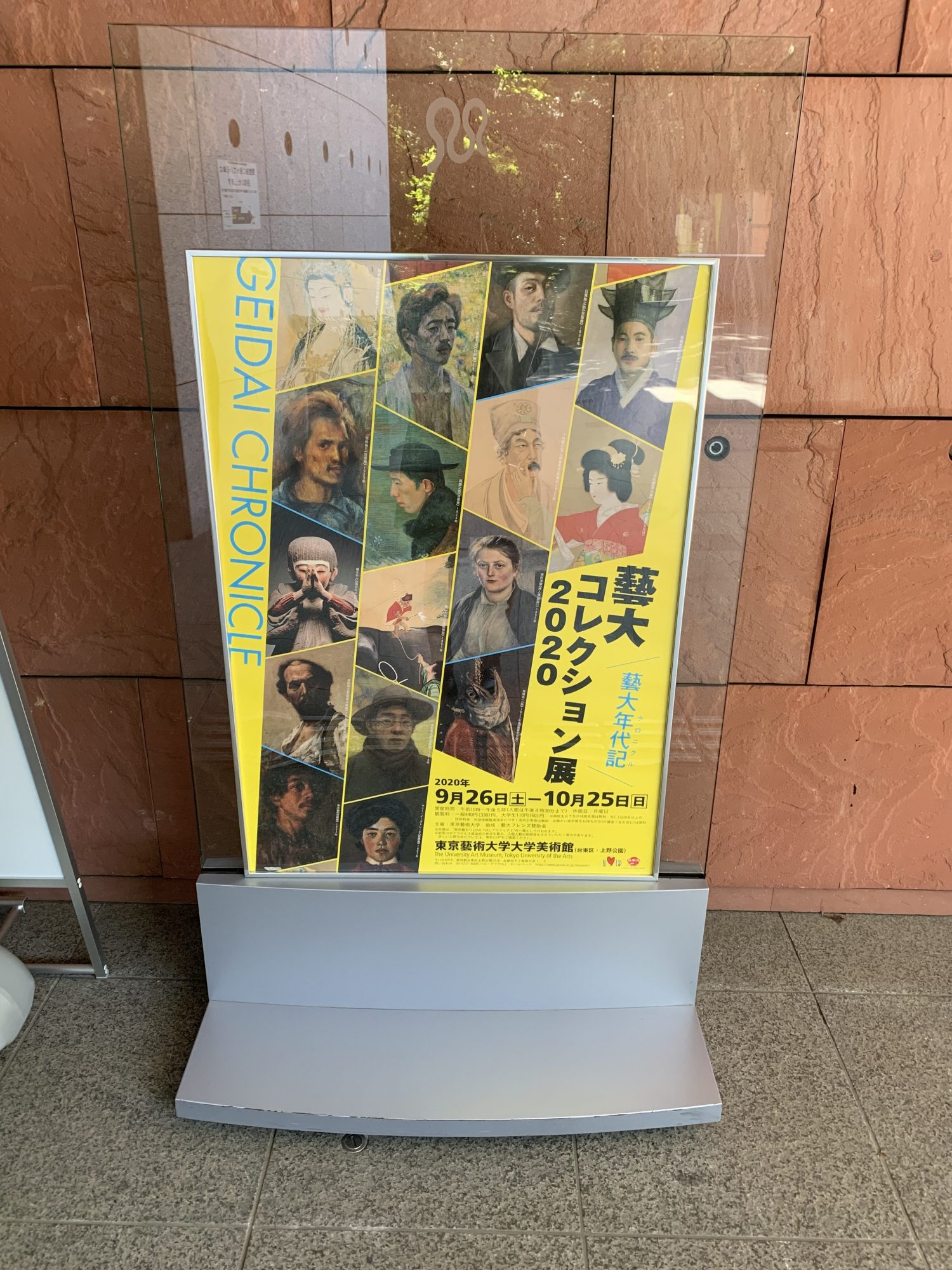 In the first part, the important times in the collection formation during the school days were introduced along with the year when the works were collected.

By clarifying the year in which the works were collected, we can see the tendency of "what kind of things the school wanted to collect as art materials from time to time" -in other words, " what kind of works the students of each period wanted to collect ". Did you learn the technology with reference to? " 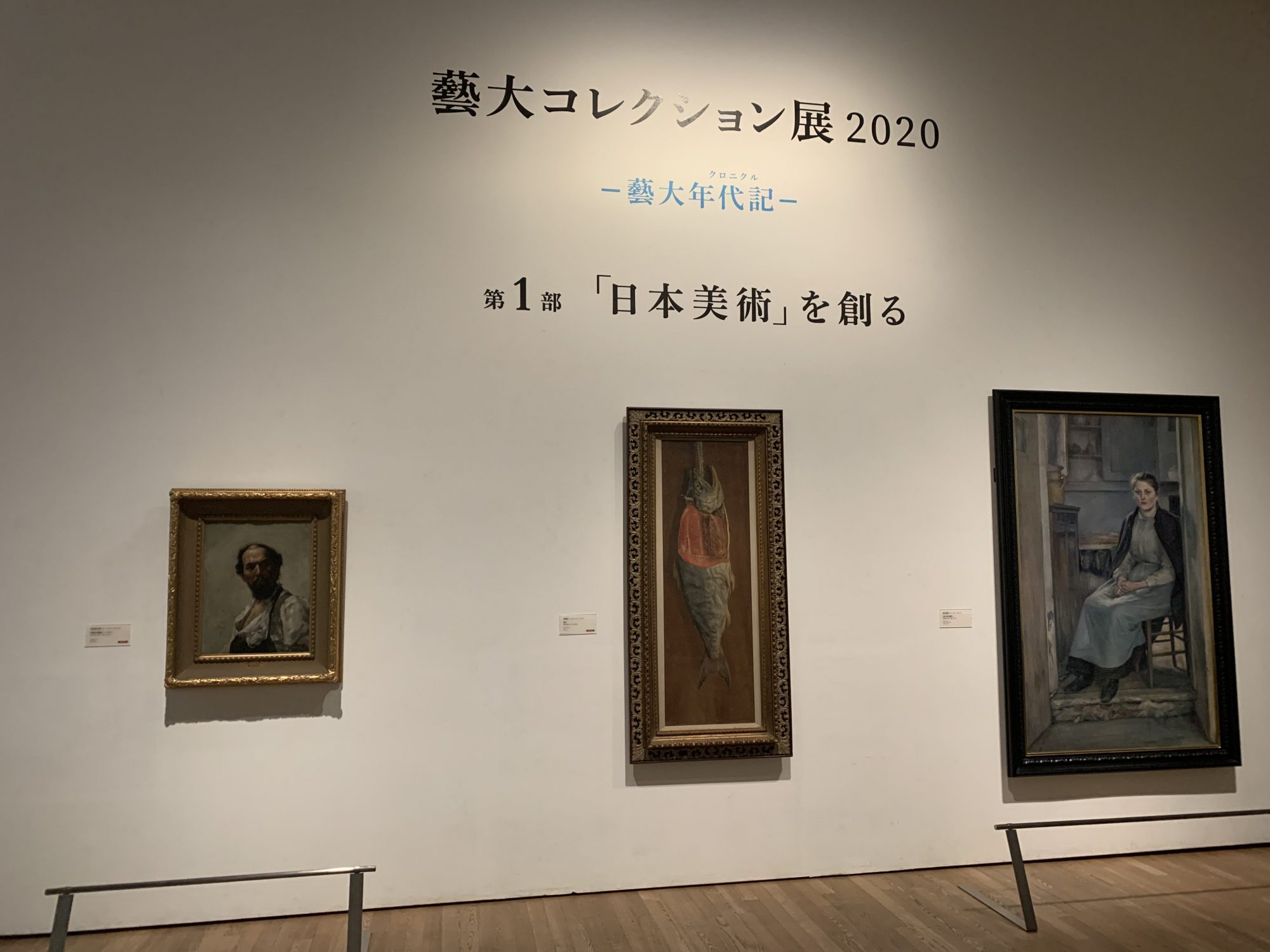 For example, welcoming visitors at the entrance,

These three famous oil paintings. (The tension soared with "Oh!" When it appeared immediately!)

It is one of the most popular paintings in the Tokyo University of the Arts collection, and it is a masterpiece that symbolizes the times, so many of you may know it.

At that time, Harada and Takahashi, who used traditional Western painting techniques, were distinguished as so-called "old school" painters, and Kuroda, who adopted impressionist-style external light expression, was distinguished as a "new school" painter. It seems that the world of Western-style painters was in a complicated situation, as journalists fueled the conflict and the Shinpa gradually became dominant.

However, there are records that all three of these items were collected at about the same time (1896-1897), when the Western Painting Department was newly established at the beauty school . You can see the teachers at that time wanting students to learn the old and new techniques and expressions of Western painting without distinction.

In this way, Part 1 gives you a glimpse into the history of schools and teachers . 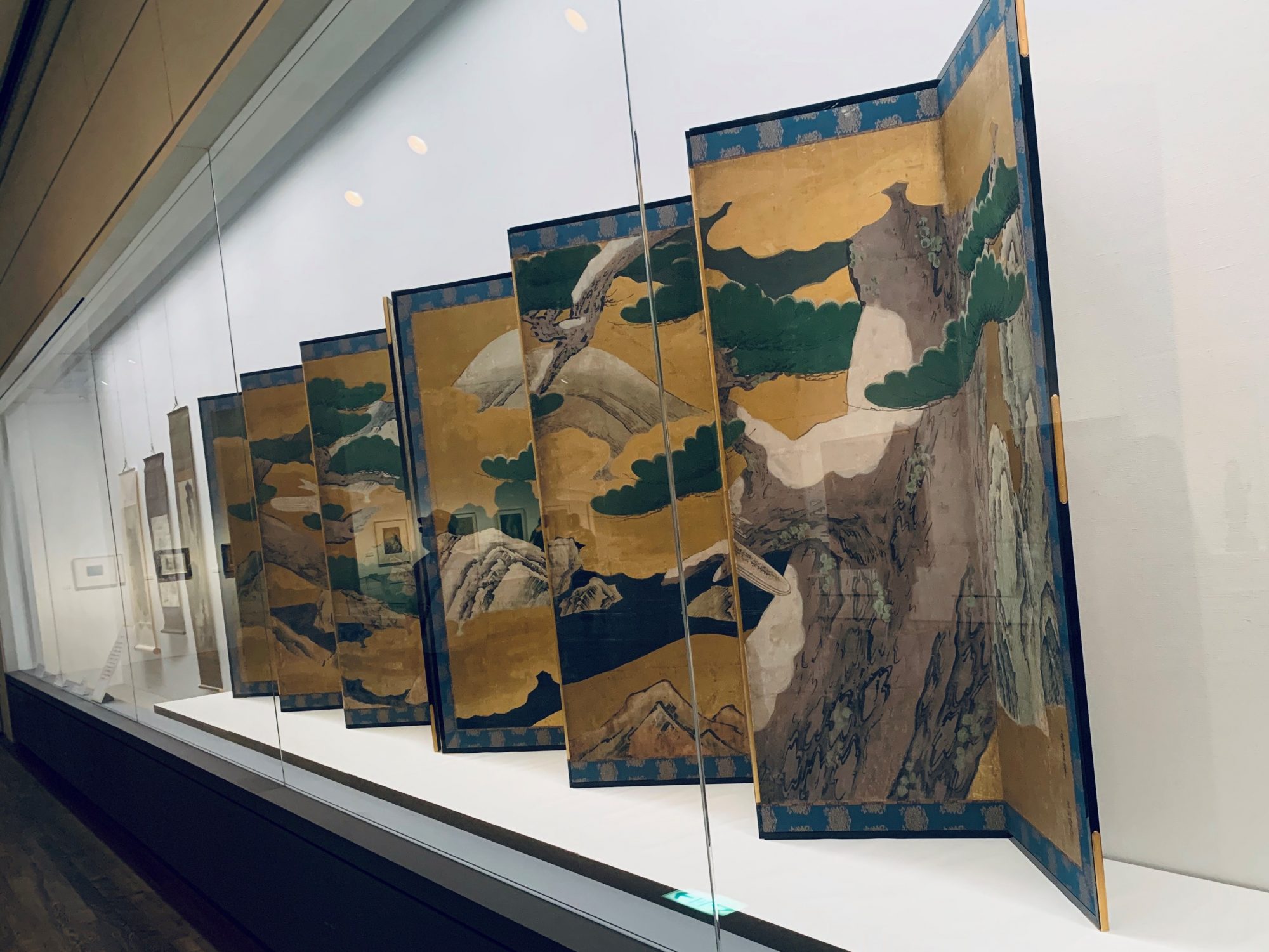 It was 1889 that was first taken up as an important age after proceeding through the entrance of the exhibition room. This is the earliest collection area where the collection was recorded in the year when the school opened.

At the time of opening the school, antique art from a wide range of eras from the Hakuho period to the Edo period, such as the national treasure "Illustrated Sutra of Causes and Effects " and (Den) Eitoku Kano's "Matsutaka Folding Screen" , was collected as reference works of art. 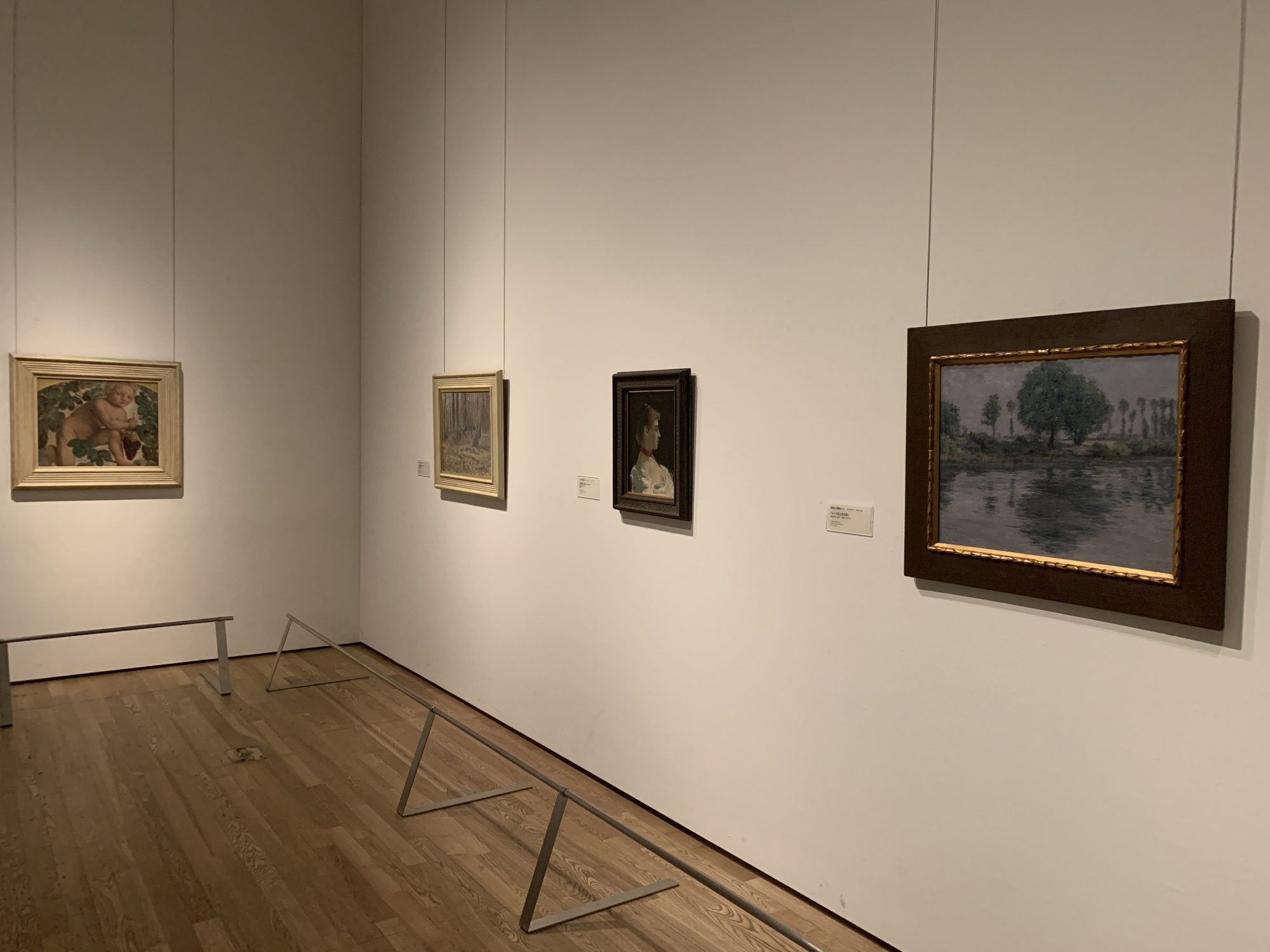 Moving to the next area, in 1896, when the Western Painting Department and the Design Department were newly established , Western paintings collected by Seiki Kuroda and Keiichiro Kume, who were invited as instructors, were exhibited.

Not only the original paintings, but also "Children and Grape" , which Kume copied a part of Bernardino Luini's frescoes while studying in France.

It seems that these replicas were very important to the Western painting department at that time. 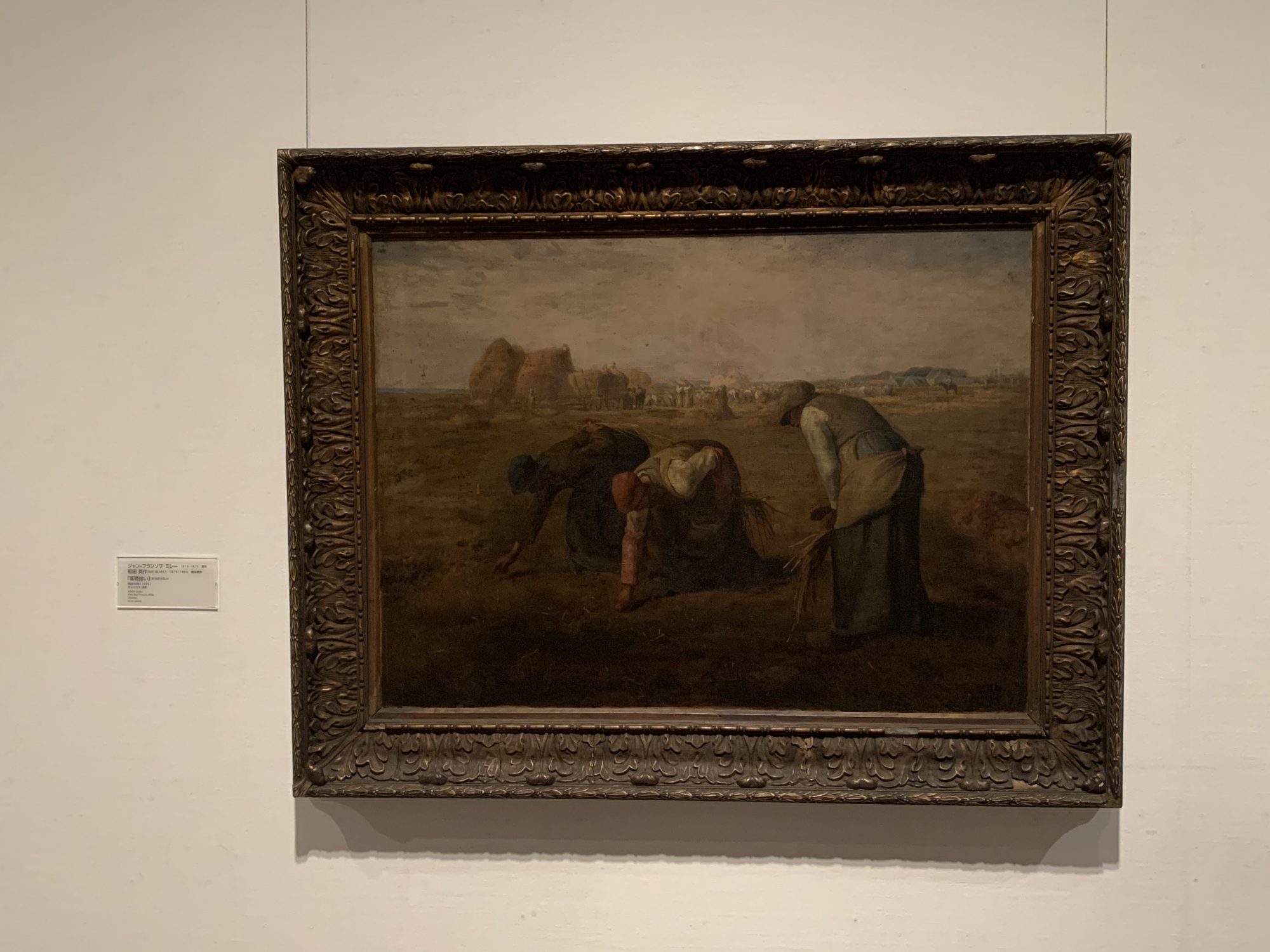 At that time, students couldn't easily go abroad to see paintings. Still, Kuroda and his colleagues, who wanted to get in touch with the excellent Western masterpieces, recommended copying classical paintings. In addition, it seems that the Ministry of Education's stipend international students were asked to submit a copy of the masterpiece to the beauty school.

As an example, what was exhibited in the same area was "The Gleaners" based on Jean-Francois Millet's masterpiece, which was copied by Wada Eisaku at the Louvre Museum in France. The color has become darker over time, but it faithfully reproduces the depiction and atmosphere of the original.

How many students did this work teach and inspire a new world? It was a painting that conveys the urgent circumstances of the time and at the same time feels a magnificent story.

Think of a phantom celestial maiden 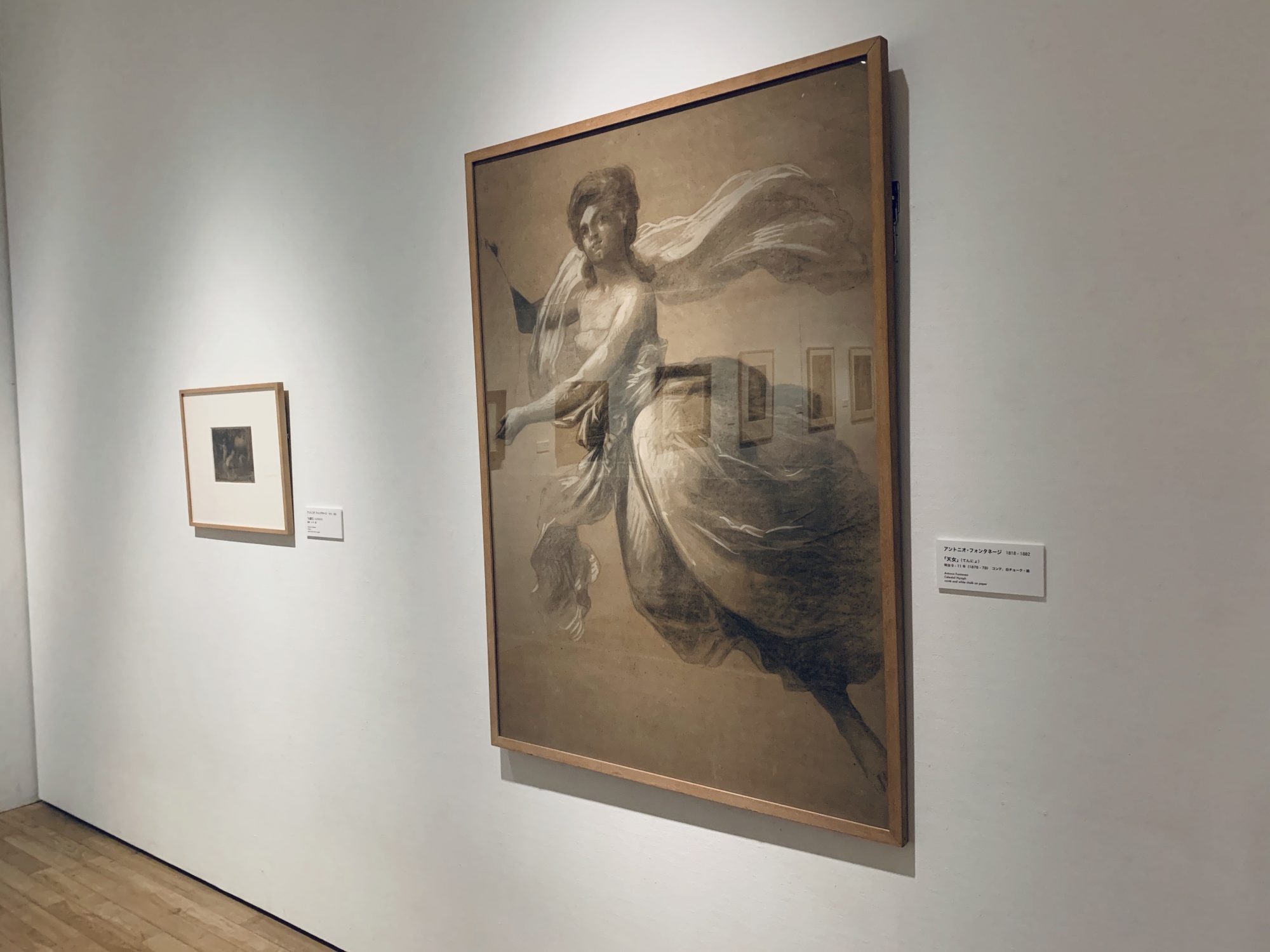 In the middle of the first part, there was an area where drawings related to the Technical Fine Arts School, which is positioned as the predecessor of Tokyo University of the Arts, was collected.

Antonio Fontanesi , an Italian painter invited as a teacher, drew small drawings such as architecture and landscape paintings for teaching materials, and among them, a huge drawing called "Tennin" that stands out. A realistic woman with a mysterious expression that looks like she is smiling, thinking, and thinking.

This is not a teaching material, but a story that "the new palace of the imperial family, which was planned to be built at that time, was drawn as a conceptual sketch for use in the mural painting." Unfortunately, the plan seems to have failed, but it stimulated my imagination how beautiful the Tennin would have been if it had been built.

There are also works exhibited at the Paris Expo, which all the schools participated in! 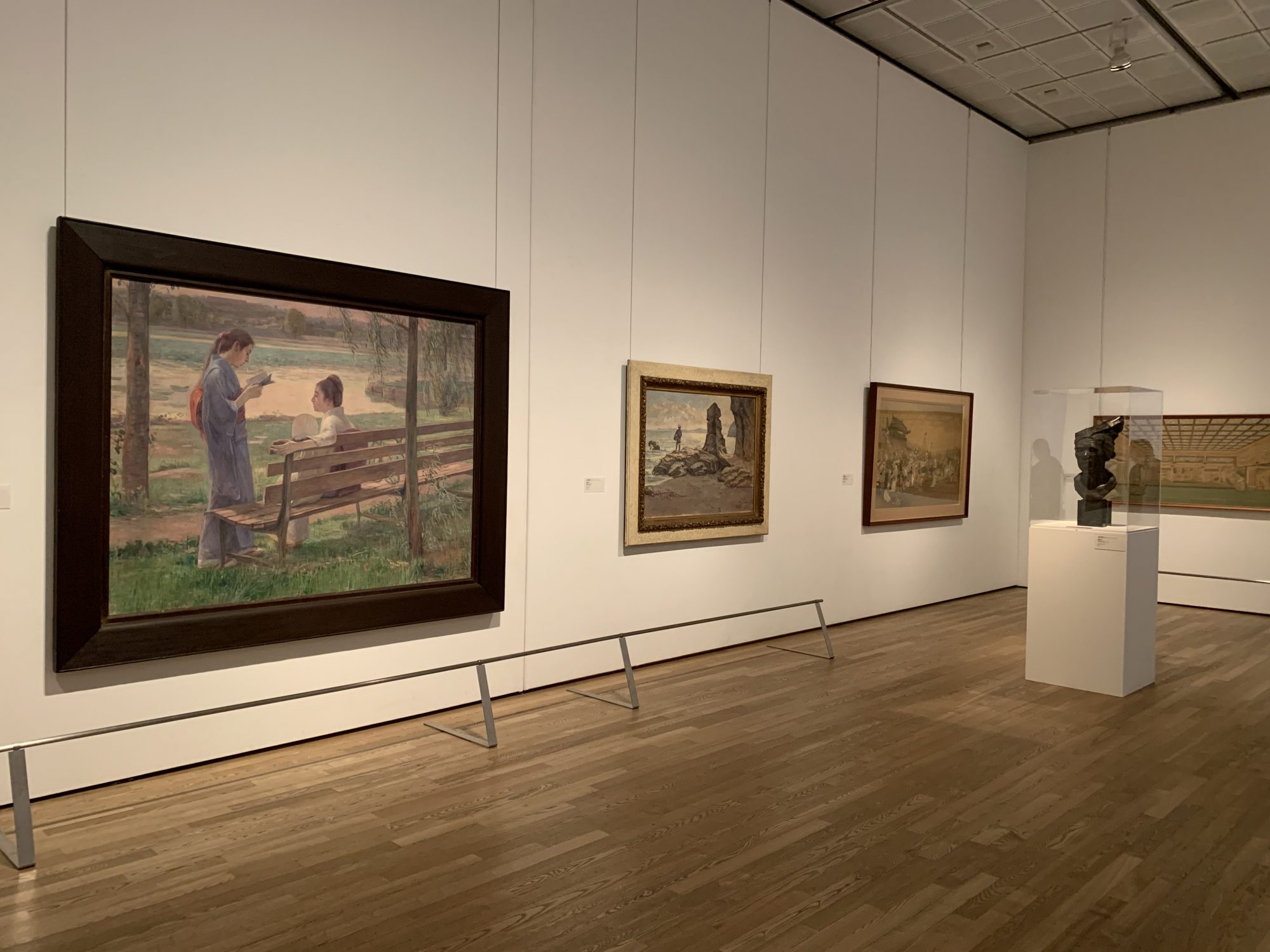 Going further into the exhibition room, in the area at the end of Part 1,

・ Works exhibited at the 1900 World's Fair in Paris, in which many teachers from beautiful schools participated.
・ In the 1930s, after receiving high praise at the so-called “public exhibition” represented by the Ministry of Education art exhibition, the work was purchased by the government and transferred to a beauty school.

I was able to appreciate it. 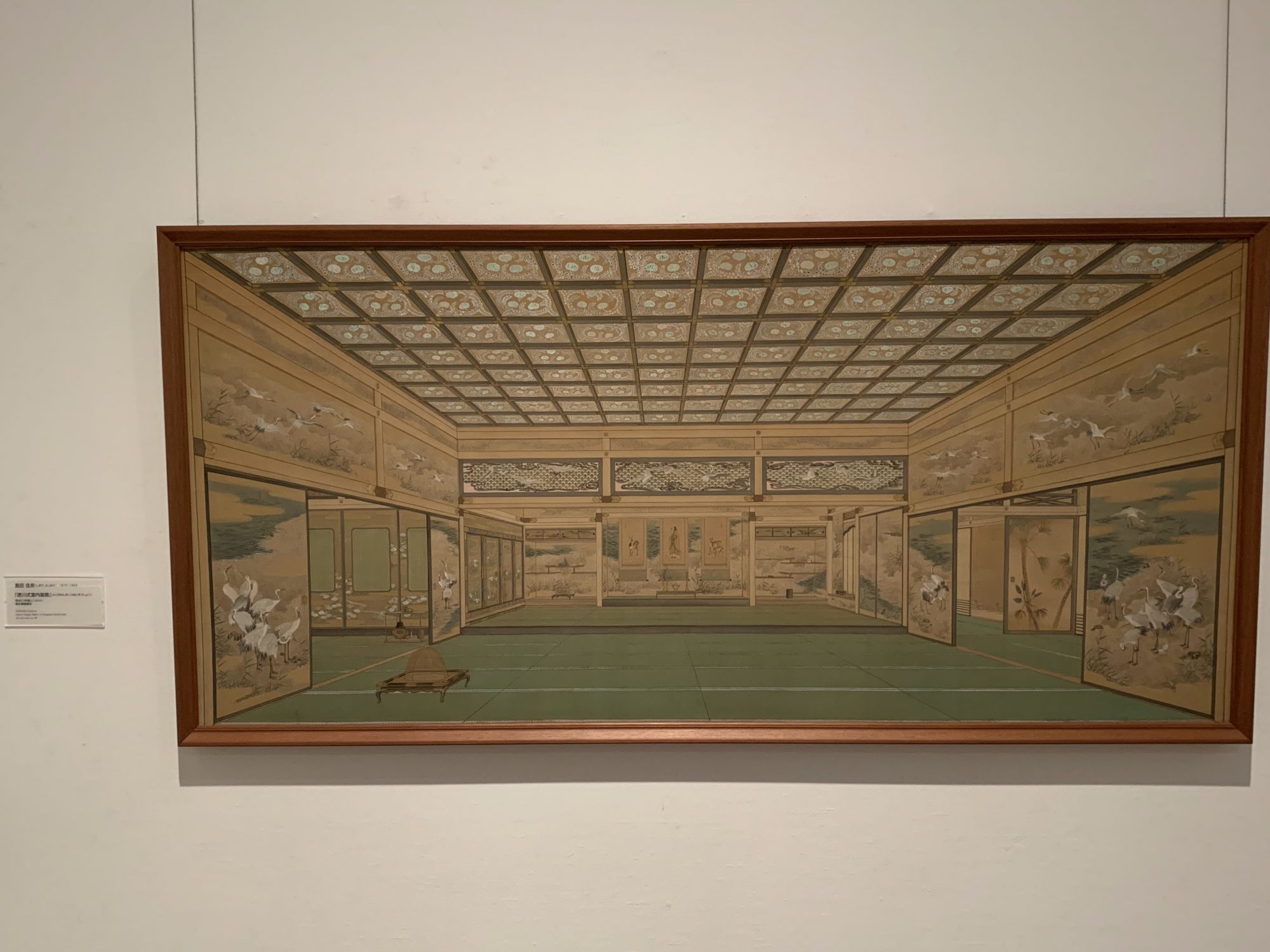 Among the works exhibited at the Paris Expo is "Tokugawa-style interior decoration" by Yoshiaki Shimada .

The interior space of the fantasy castle is depicted in detail in the style of the Edo period, but how to decorate crafts, how to hang a hanging shaft, the existence of bran, a designed family crest, a crane as a congratulatory motif … … It seems that the design proposal was made to introduce such things to people overseas who were becoming more interested in Japanese interior decoration.

To the last, it was conservative, but the charm of each prop and decoration was drawn in a very detailed and attractive manner, and I was impressed.

It is said that these exhibited works are very important as a record of how Japan responded to the Expo, which was one of the most important cultural phenomena in the 19th century. 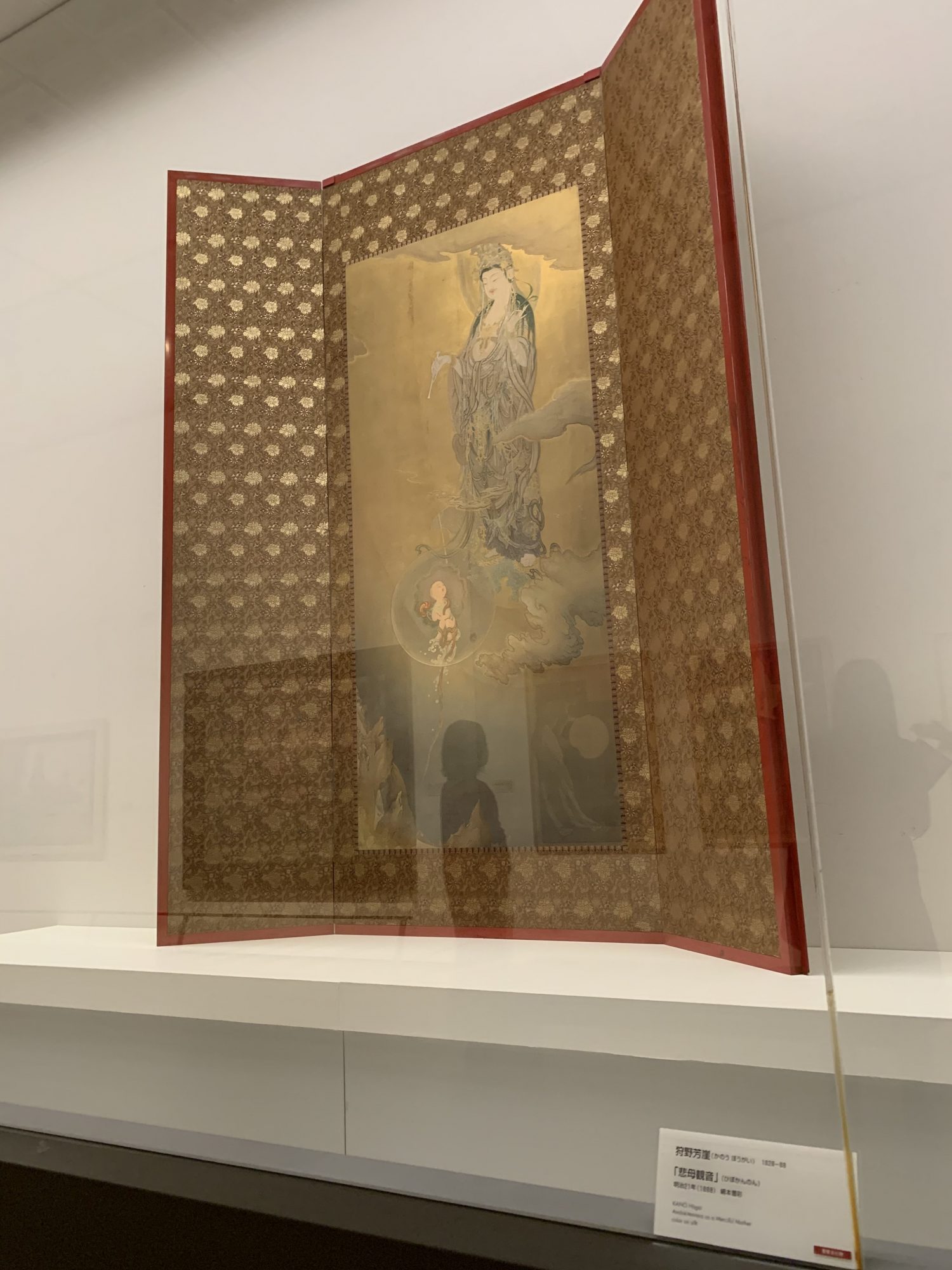 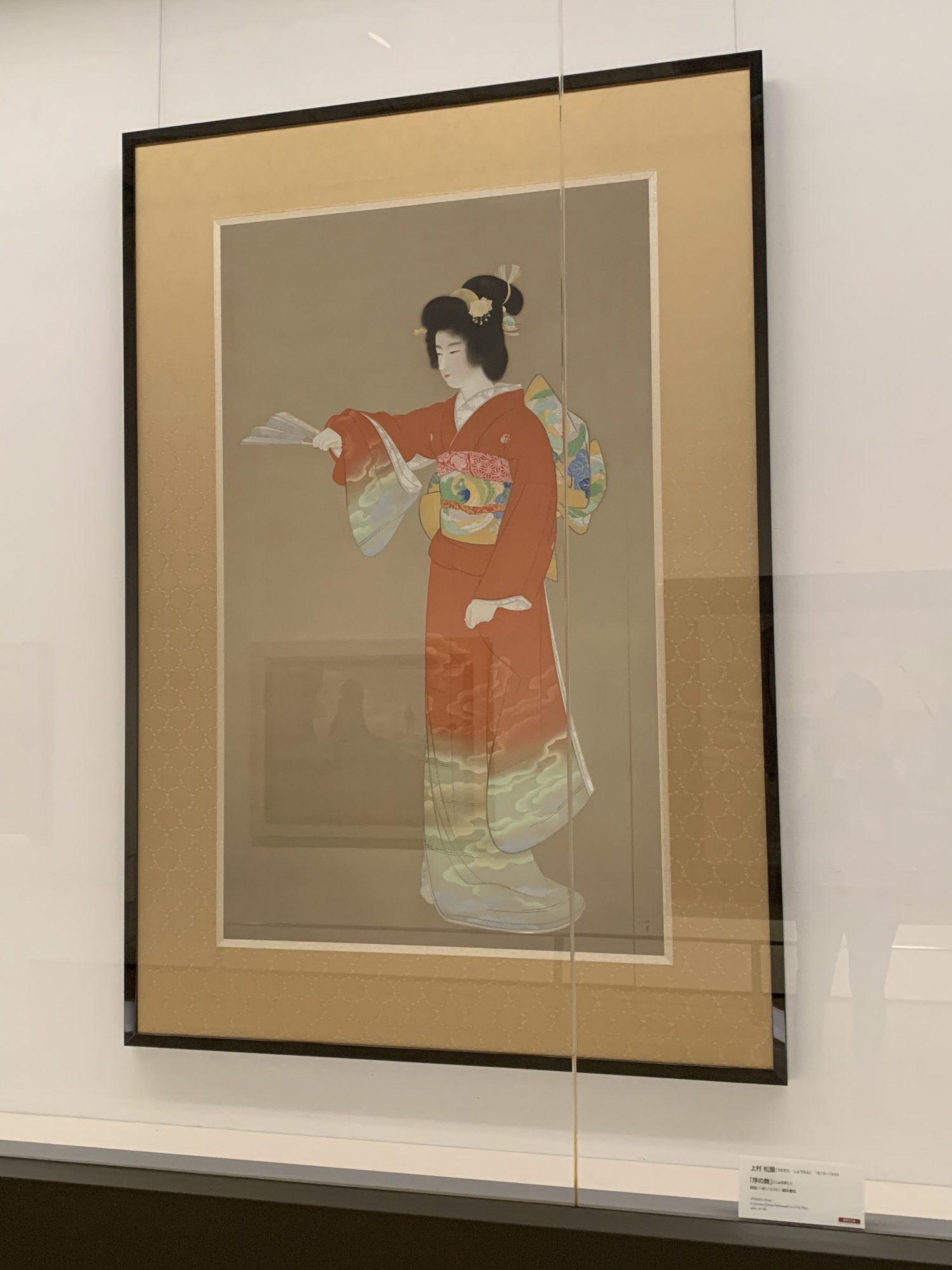 Uemura Shoen's "Introduction Dance" , which is an important cultural property, and Kano Hogai's "Sorrowful Mother Kannon", which was specially exhibited, were also displayed in this area. Both are quite large and truly powerful.

As for "Sorrowful Mother Kannon", which can be said to be the treasure of the University of the Arts Museum, it is said that many people visit the "Tokyo University of the Arts Collection Exhibition" just to see it. I visited there in the morning on weekdays, so I was fortunate enough to be able to take a closer look in front of my eyes. 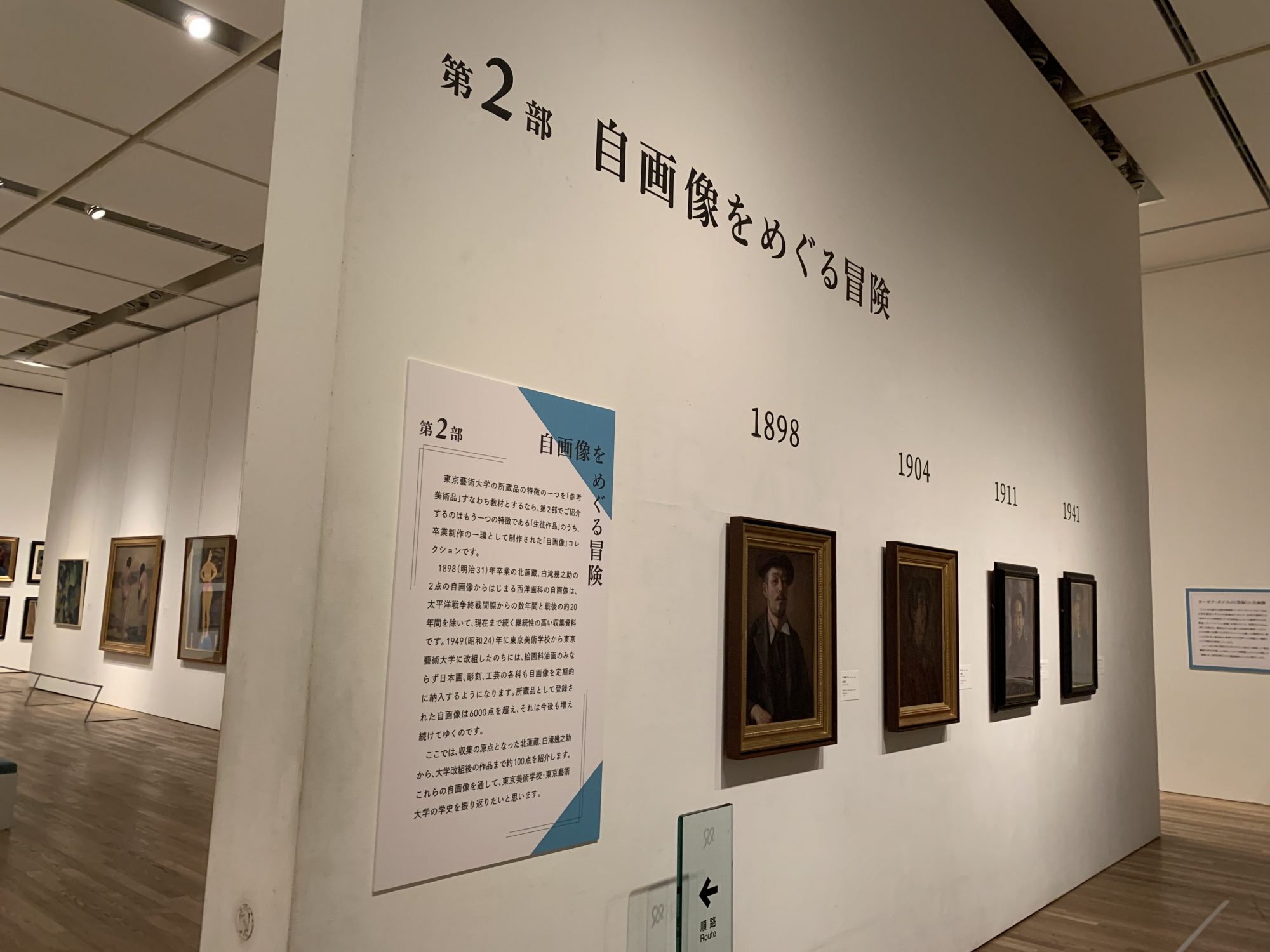 If the first part is school and teacher records, the second part is student records.

In the Western painting department, self-portrait production is traditionally included in the curriculum, and even now all graduates are supposed to pay self-portraits to school. Here, the self-portrait and the work purchased as a graduation work are displayed. 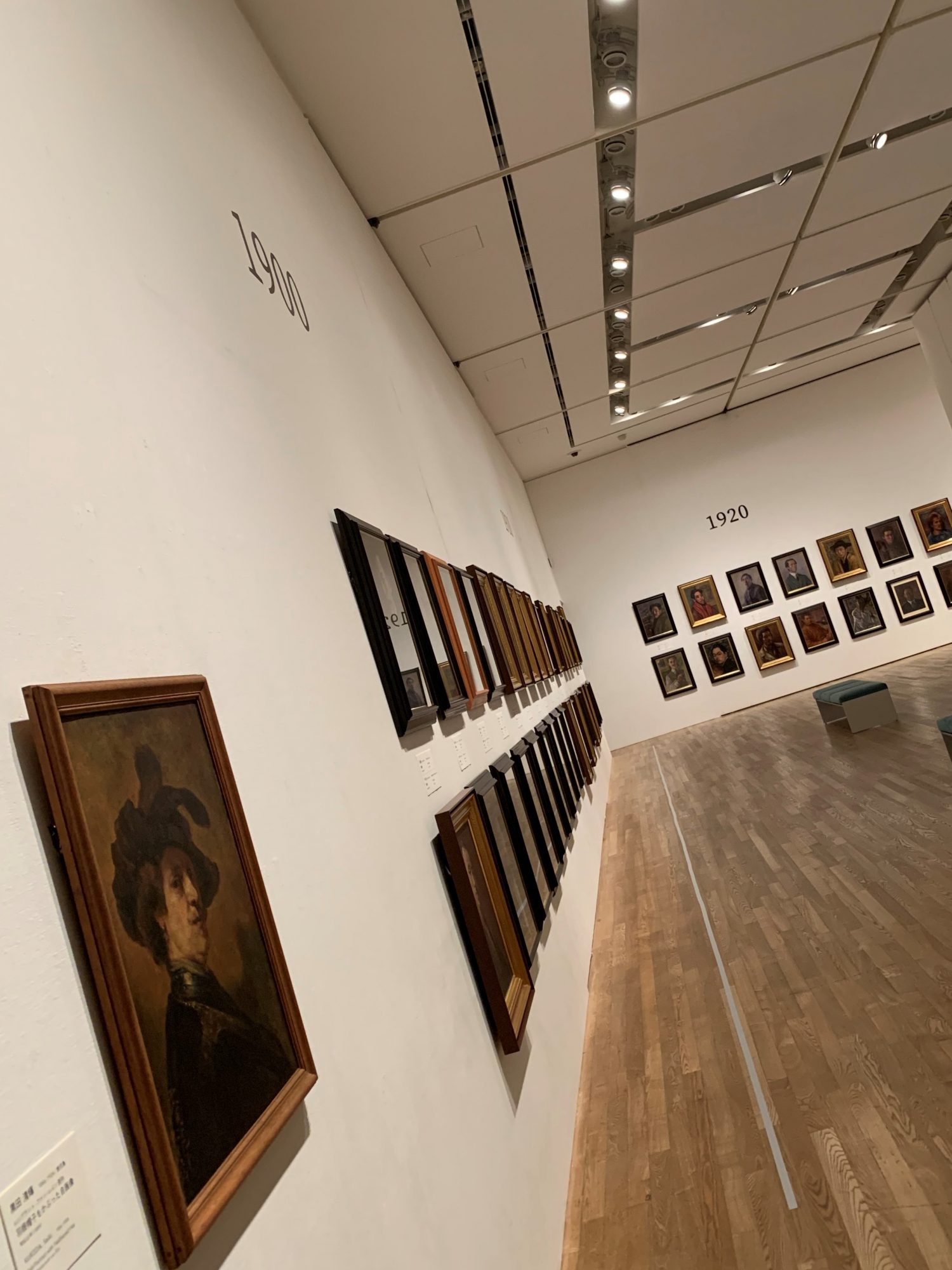 Not only in Japan, but also in overseas art schools, there is probably no school that always pays self-portraits, and it is a culture unique to art schools and Tokyo University of the Arts. It's a little interesting story, isn't it? 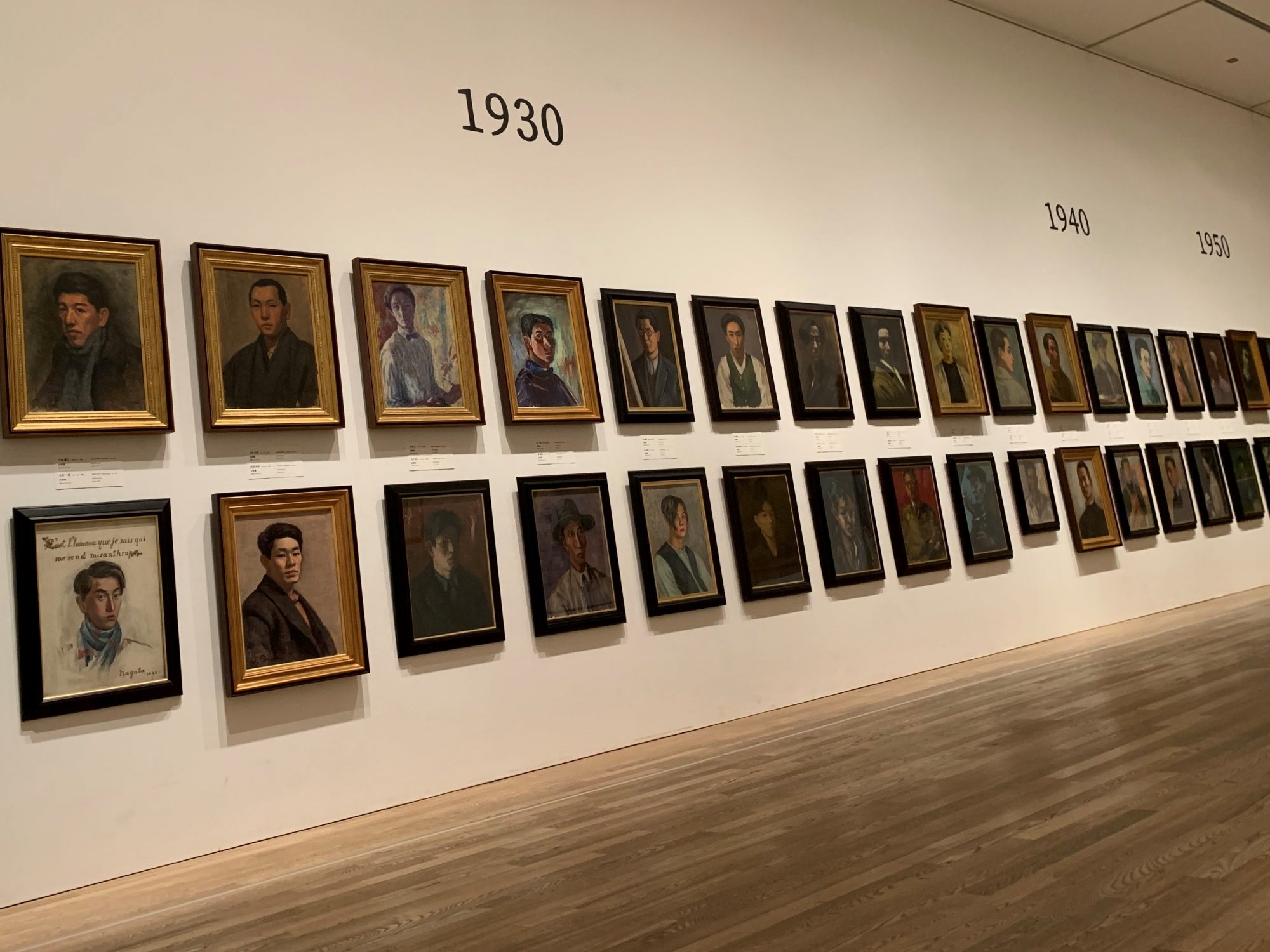 It was too spectacular to see more than 100 self-portraits decorating the exhibition room …!

Shigeru Aoki, Tetsugoro Yorozu, Tsuguharu Fujita, Yuzo Saeki, Junji Yoshii, Toshio Nakanishi, and other people who have made a name for themselves in the history of modern Japanese art are gathered together in their youth. Isn't it just a coveted sight for fans?

It is decorated according to age, but in the Meiji era, there were many people who wore kimono and who were dignified. However, after the Taisho era and entering the Showa era, there are people who have strong personality, such as not wearing clothes or writing facial parts. During the war, there was an "era" that could be seen by arranging them side by side, with a heavy atmosphere.

When drawing a self-portrait, he often puts in not only his own figure but also his favorite things and props that convey his character.

So, I wonder if this person liked Gauguin when he was a student, or maybe he liked the ukiyo-e drawn behind him … Imagine each person's background and hobbies, and there are new discoveries. maybe. 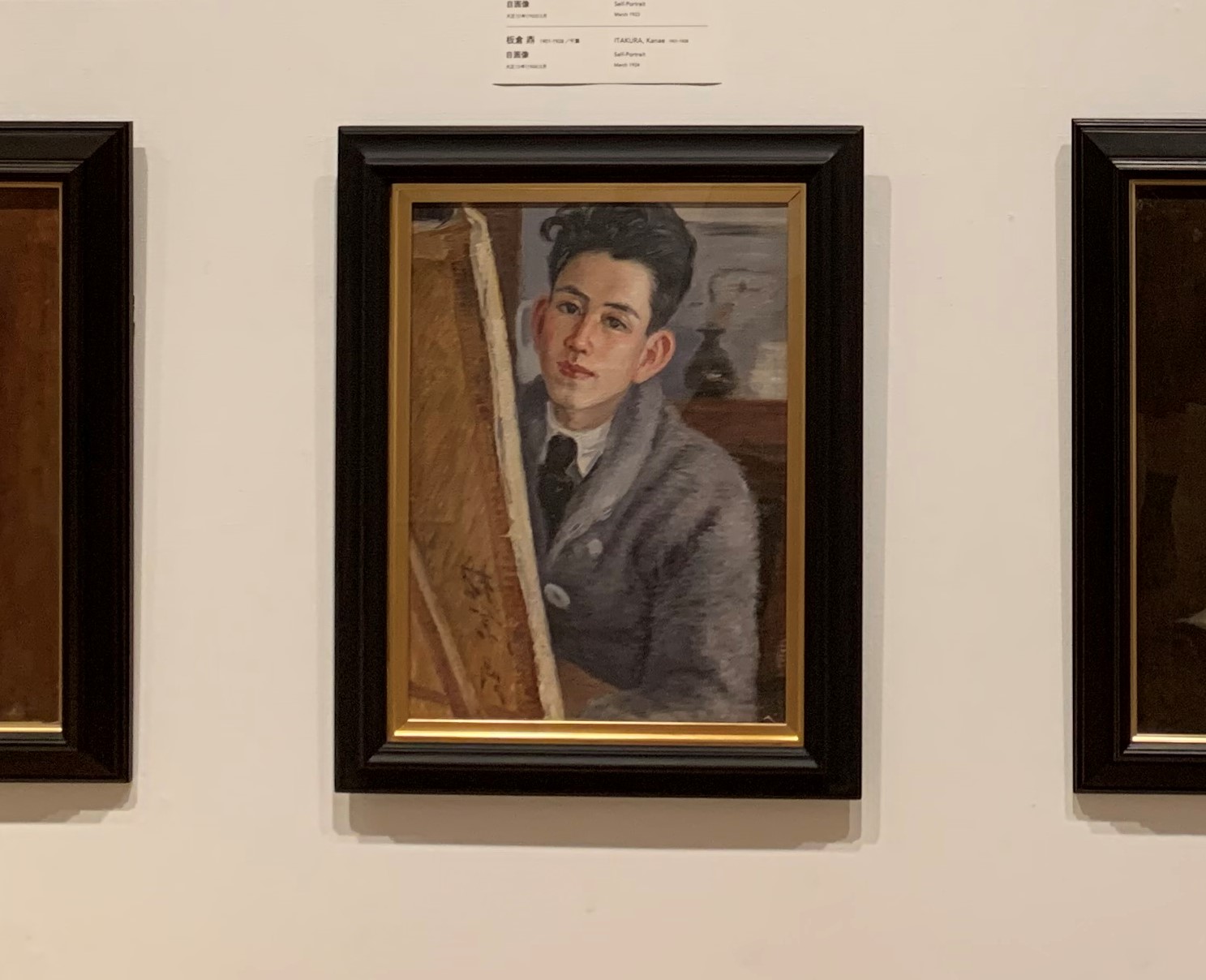 What I liked the most was the self-portrait of Ding Itakura . While there were many self-portraits with dark and calm colors, the white skin and canvas were reflected dazzlingly, and I was healed by the soft brush strokes and gentle appearance. 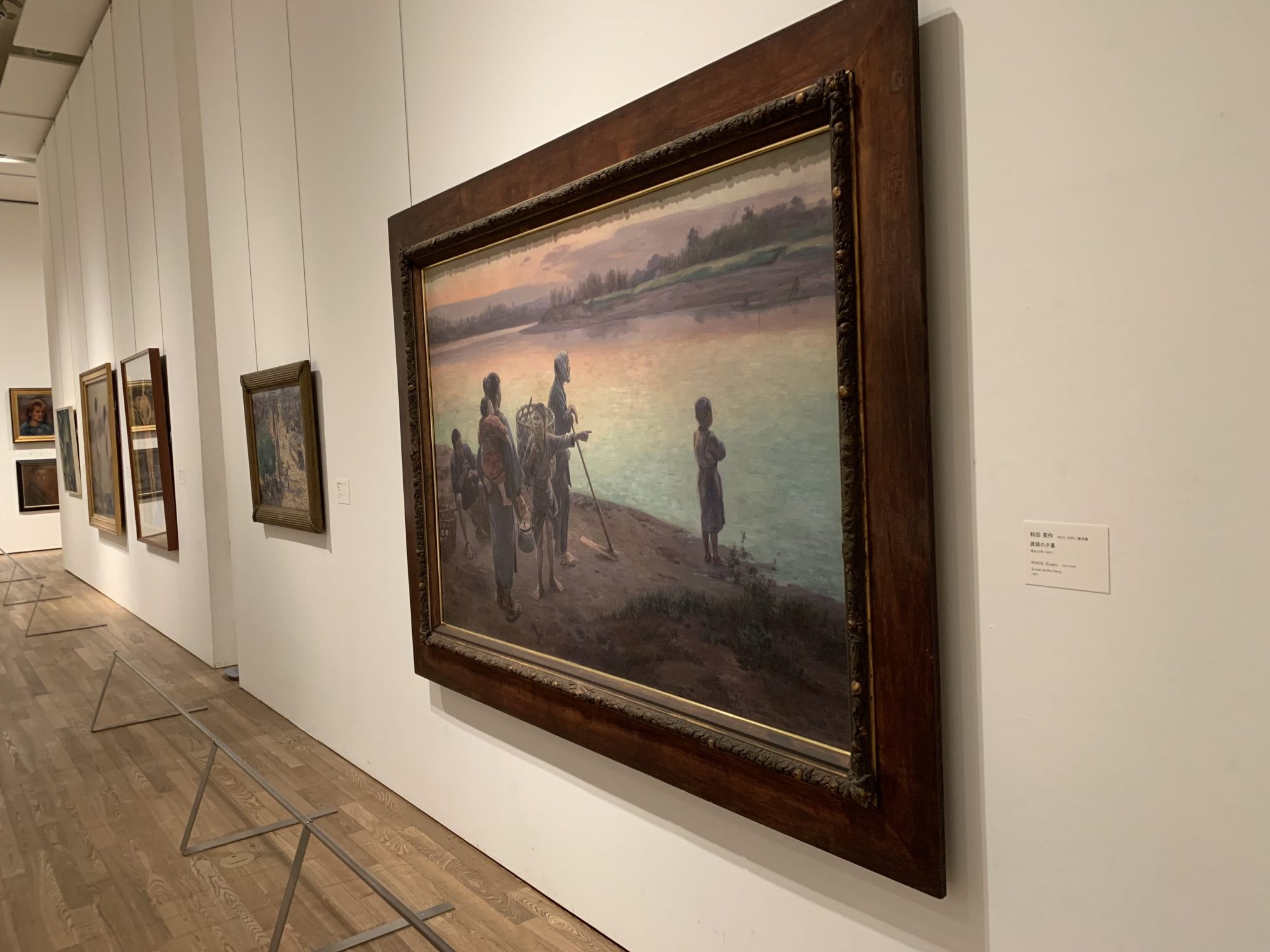 In the exhibition of the graduation work, 11 items such as Yokoyama Taikan's "Murado Kansaruoh" and Wada Eisaku's "Watashi no Yugure" were lined up.

"Murado Kansaruoh" is a terrific work that is different from later years, as if the children were playing with a smile, the expression was strange and a little scary. "Yugure of Watanabe" is realistic, but the colors of the sky and the river are fantastic and drawn in like a dream.

I'm sorry that there is no image, but what was interesting was the multiple design drawings of Yoji Kanazawa's "Utopia Club" . It is said that it is a picture of a fantasy plan to create a leisure facility for each island, but the design is still very novel even now, and the strangeness that puts the curve as the main is addictive. It's not flashy, but it has a cute atmosphere that makes you want to decorate the walls of your house.

Please pay attention when you visit.

The venue was only the exhibition room on the 2nd basement floor of the University of the Arts Museum, so it was a relatively small exhibition, but I was satisfied that the general admission fee of 440 yen was too cheap.

By the way, recently, the number of exhibitions that require advance reservations to prevent infection with the new coronavirus is increasing, but you can drop in at this exhibition when you think of it.

The "Tokyo University of the Arts Collection Exhibition" is held once or twice a year. It seems that some famous works are on display, but the number of collections is over 30,000. There must be a work that will be released for the first time this time, and a work that will not appear for decades if this time is missed.

It will be held until October 25th (Sun). We have less than two weeks left, but please do not miss this opportunity.

* This exhibition does not require advance reservations, but you may have to wait for admission depending on the congestion situation to prevent the spread of the new coronavirus infection.

Organizer: Tokyo University of the Arts