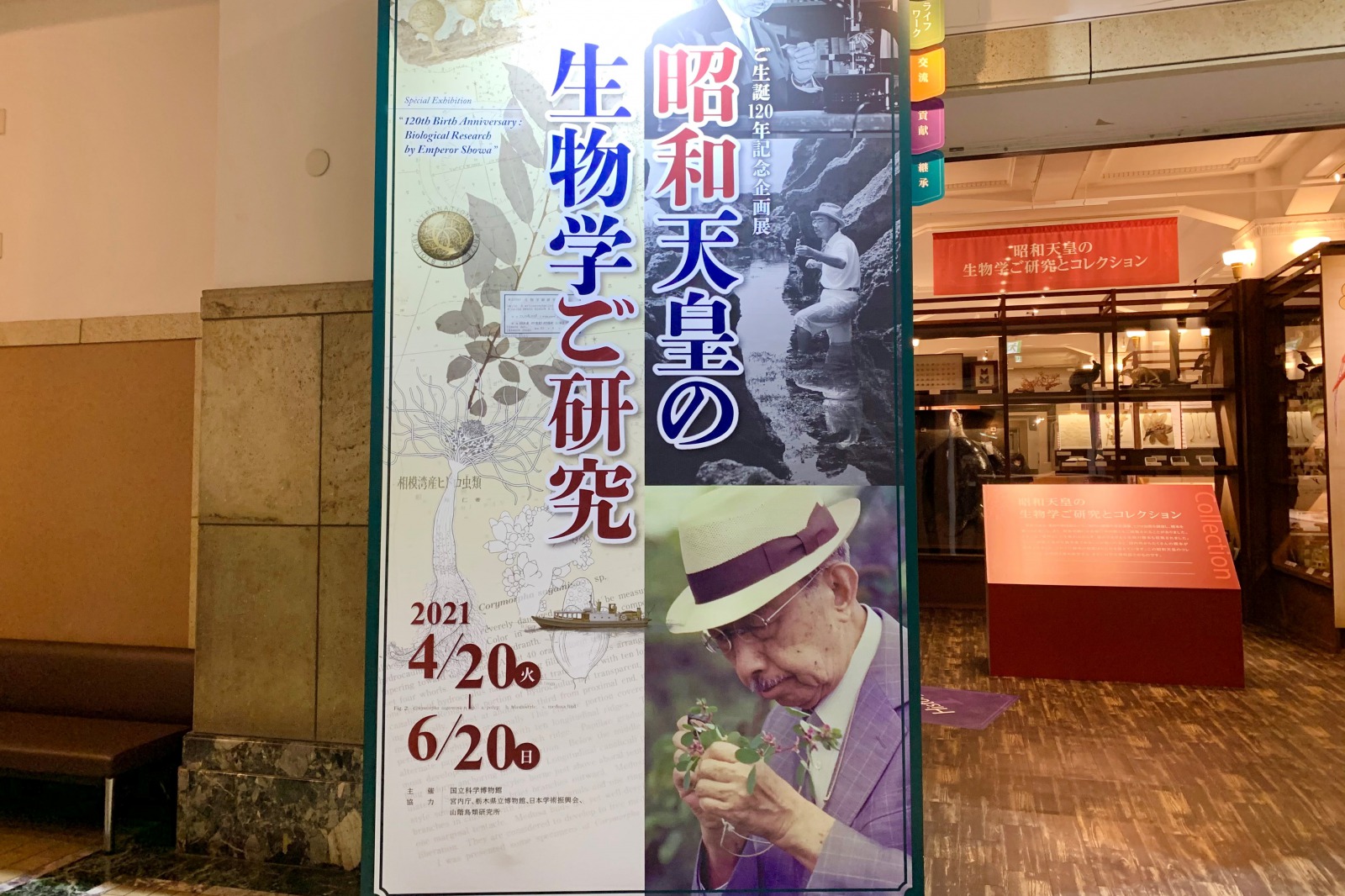 At the National Science Museum in Ueno, Tokyo, the 120th anniversary exhibition "Emperor Showa's Biology Research" is being held from April 20th (Tuesday) to June 20th (Sunday), 2021. is.

I have participated in the press preview held prior to the event, so I would like to report on the situation at the venue.

* Shooting is prohibited in the exhibition hall. The photos in the article were taken at a press preview with special permission. 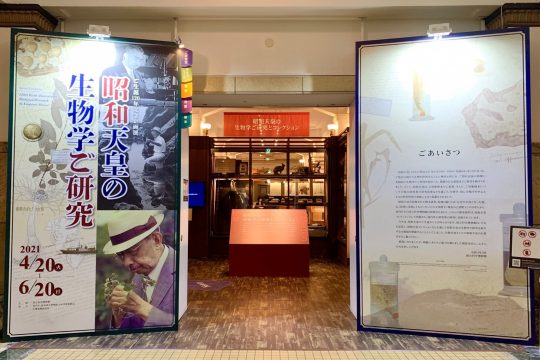 Emperor Showa (1901-1989), who was interested in studying biology from an early age and continued his lifelong research on biology such as deformed fungi, plants, and hydroins during his busy duties. ..

Many people in their 40s or older know that Emperor Showa was a biologist. Even if the total number of collections left by specimen collection exceeds 60,000, you can see the passion for biology.

However, time is Reiwa. More than 30 years have passed since the demise of the Showa Emperor, and the number of generations who feel their existence in the distance has increased.

I would like many people, including the younger generation, to look back on the research of Emperor Showa, who contributed to the development of biology in Japan, and get familiar with it. This exhibition was planned by the museum in the milestone year of 120 years of birth.
Introducing the appearance of Emperor Showa as a biologist through valuable collections and exhibitions of materials.

State of the venue 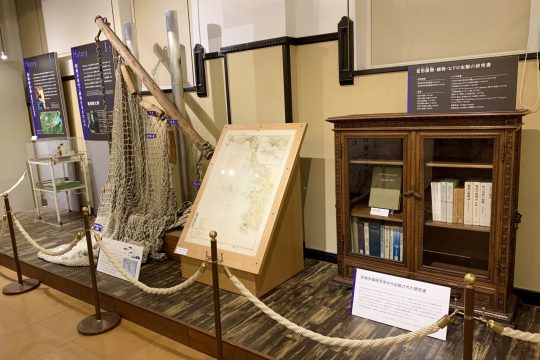 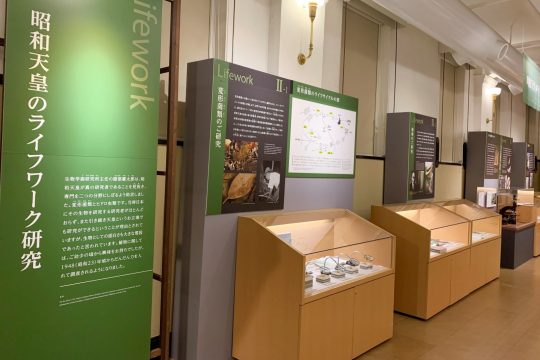 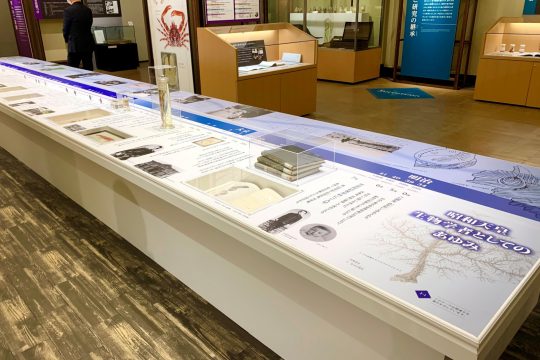 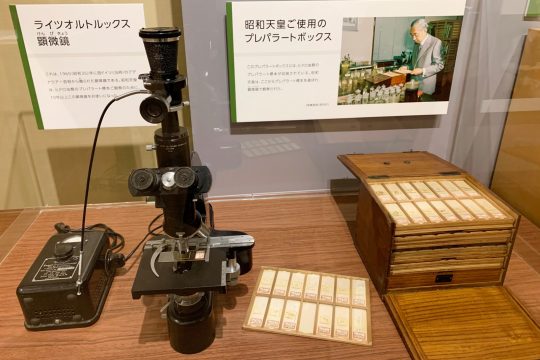 The venue was the exhibition room on the 1st floor of the Japan Pavilion at the National Science Museum. Around the center of the chronological panel centered on the events related to the biology of Emperor Showa
"1. History of Biology Research"
"2. Lifework research"
"3. Exchange with domestic and foreign researchers"
"4. Contribution to Biology"
"5. Inheritance of Biology Research"
Exhibition corners for each theme were lined up.

The materials introduced were mainly collected specimens, books, materials showing interaction with researchers, and research results by other researchers entrusted with the research.

At that time, there were many organisms for which taxonomic research had not yet progressed, but the number of new species announced by researchers based on the specimens collected by Emperor Showa reached a whopping 400 species (!) For marine animals alone. However, there was a lot of surprising information.

In the field of biology, especially taxonomy, the exhibition contents give a bird's-eye view of how the research of Emperor Showa has a great influence and how the research is inherited now. 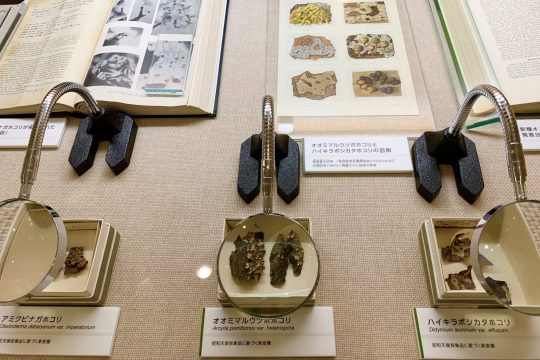 An overview of the deformed fungi and hydroins that have been studied as life work is explained in detail in the exhibition. Some of the specimens of deformed fungi can be carefully observed with a magnifying glass. 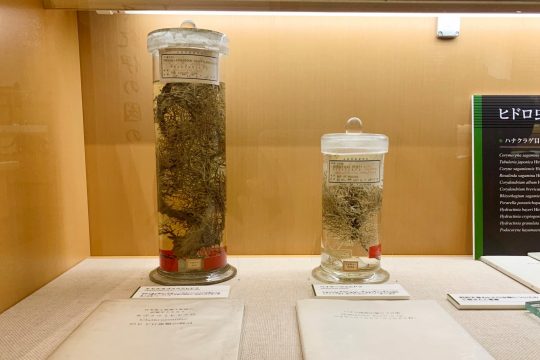 As a result of his research on hydro-insects, he published seven reports (treats) and two books, and announced 32 new species. In this exhibition, there is also a type specimen (left photo) of the hydro-insect "Kiseru Kagome Hydra" that Emperor Showa himself announced as a new species. 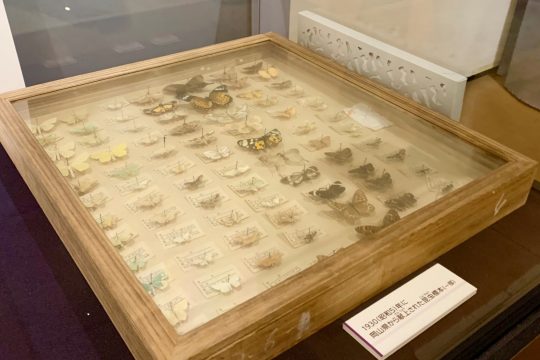 Just the other day, some of the 688 insect specimens that were announced to have been found in the collection of Emperor Showa are also on display. This is the oldest and most valuable insect specimen from Okayama prefecture, which was presented by Yukiyuki Okayama in 1930. 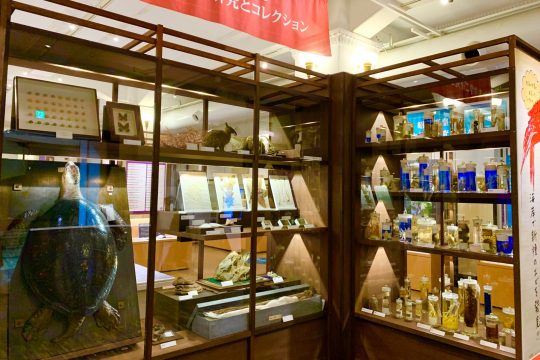 Part of a collection of specimens, including donations. You can see that there is a wide variety of rice, from sea turtles to rice harvested at the Imperial Palace, and a collection of all kinds of natural products. 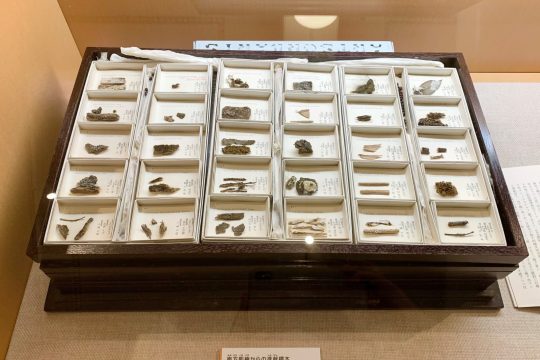 A stunning specimen of 90 deformed fungi presented by biologist Minakata Kumagusu. According to Professor Tsuyoshi Hosoya of the National Museum of Nature and Science, Emperor Showa was hesitant to even touch this specimen because he was cherished, but he was also greatly stimulated.

Is "there is no weed" really the word that Emperor Showa said?

By the way, as far as you can see, you may get the impression that the exhibition is specialized and a little difficult for beginners to enter. There were many materials on display that would allow people who are not familiar with this field (the author) to understand the personality of Emperor Showa and the depth and enthusiasm of living things, so I picked up some of them. I will introduce you. 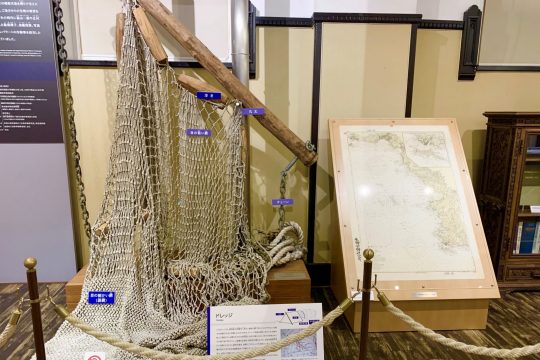 It seems that Emperor Showa, who was engaged in research during his busy public affairs, sometimes called his research a "hobby," but the reality is that it is a full-fledged thing that blows away the image of the word "hobby."

Occasionally, a collection boat was sent off the coast of Hayama Imperial Villa, and various marine animals were collected using the dredge (collection equipment) shown in the photo above. This is surprising because it is a natural history museum-class marine animal survey itself. 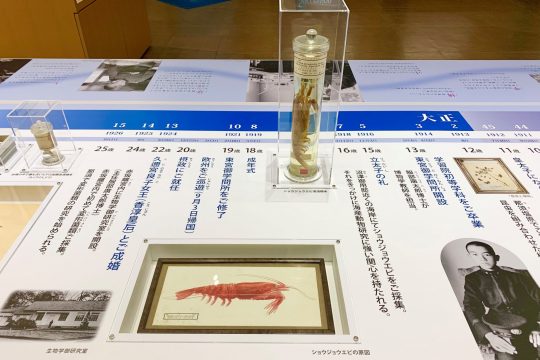 The immersion specimen of Shojo shrimp placed on the chronological panel was collected in 1918 by the then 16-year-old Emperor Showa on the coast near the Numazu Imperial Villa. It is said that Emperor Showa was the first discoverer in Japan.

This was a turning point for me to get a strong interest in marine animal research. It can be said that this is because they have been familiar with living things through insect collecting, flower collecting, and fish catching since childhood. 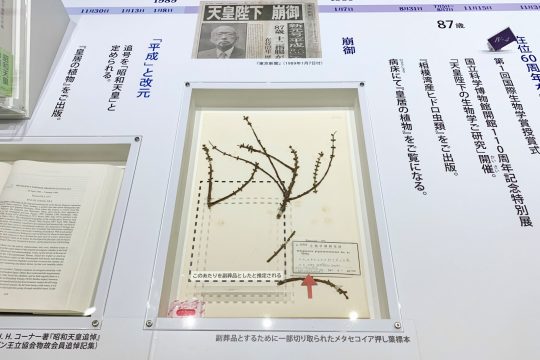 Pressed leaf specimen of Metasequoia. There is a cut-out mark in the lower left.

There is another specimen on the chronological panel that I would like you to pay attention to, which is the metasequoia pressed leaf specimen. Metasequoia is a plant loved by Emperor Showa, and it is said that a part of the specimen was buried as a burial item in the grave at the time of the demise.

I don't know if it was an instruction from Emperor Showa or the consideration of the people around him, but there is no doubt that it is an impressive anecdote that colors the existence of Emperor Showa as a biologist. 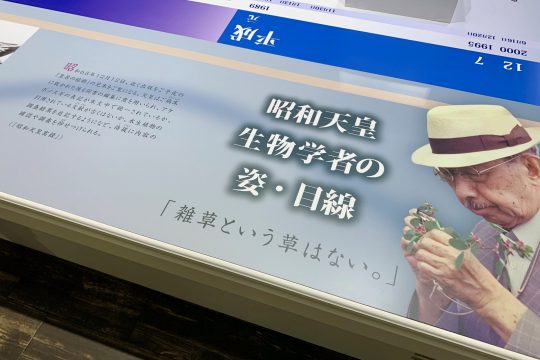 Introducing the famous word "There is no grass called weed."

The words "There is no grass called weeds", which the author was wondering whether it was really the remark of Emperor Showa or fiction, was also introduced with a source. (Although the details seem to be slightly different)

It seems that there are multiple statements to the same effect in various materials. (Masanori Tsujita, "Words of the Emperor Meiji, Taisho, Showa, Heisei" [Gentosha 2019], etc.) It is a must-see because it features interesting episodes such as the frog that was given the title of "First Rank Frog Daimyojin". 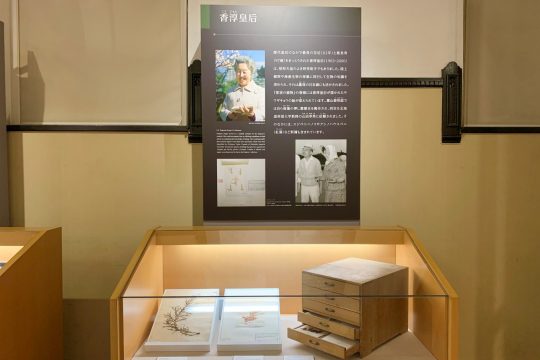 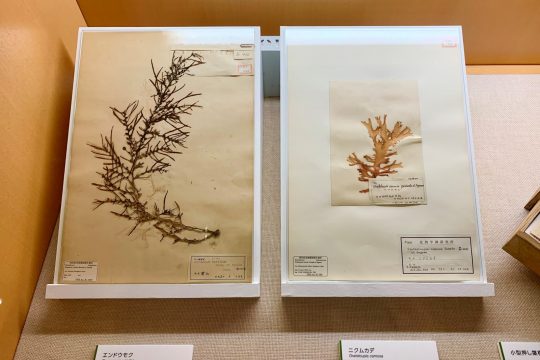 Professor Taiki Kitayama of the National Science Museum says, "Since Emperor Showa was mainly interested in benthic animals, most of the seaweed mixed in the collection might have been handed over to the empress." ..

Since Empress Kojun's collection was integrated with Emperor Showa's collection at some stage, it is estimated that most of the seaweed specimens belong to Empress Kojun, although the distinction between the two is currently unclear. A professor at Hokkaido Imperial University asked me to identify it, and some of them included new species such as Sujibenihanori.

Like Empress Kojun, who was instructed in Japanese painting, the pressed leaf specimens are beautifully finished, so please pay attention to this exhibition as well. 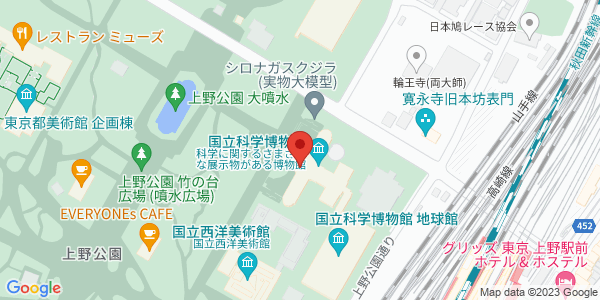