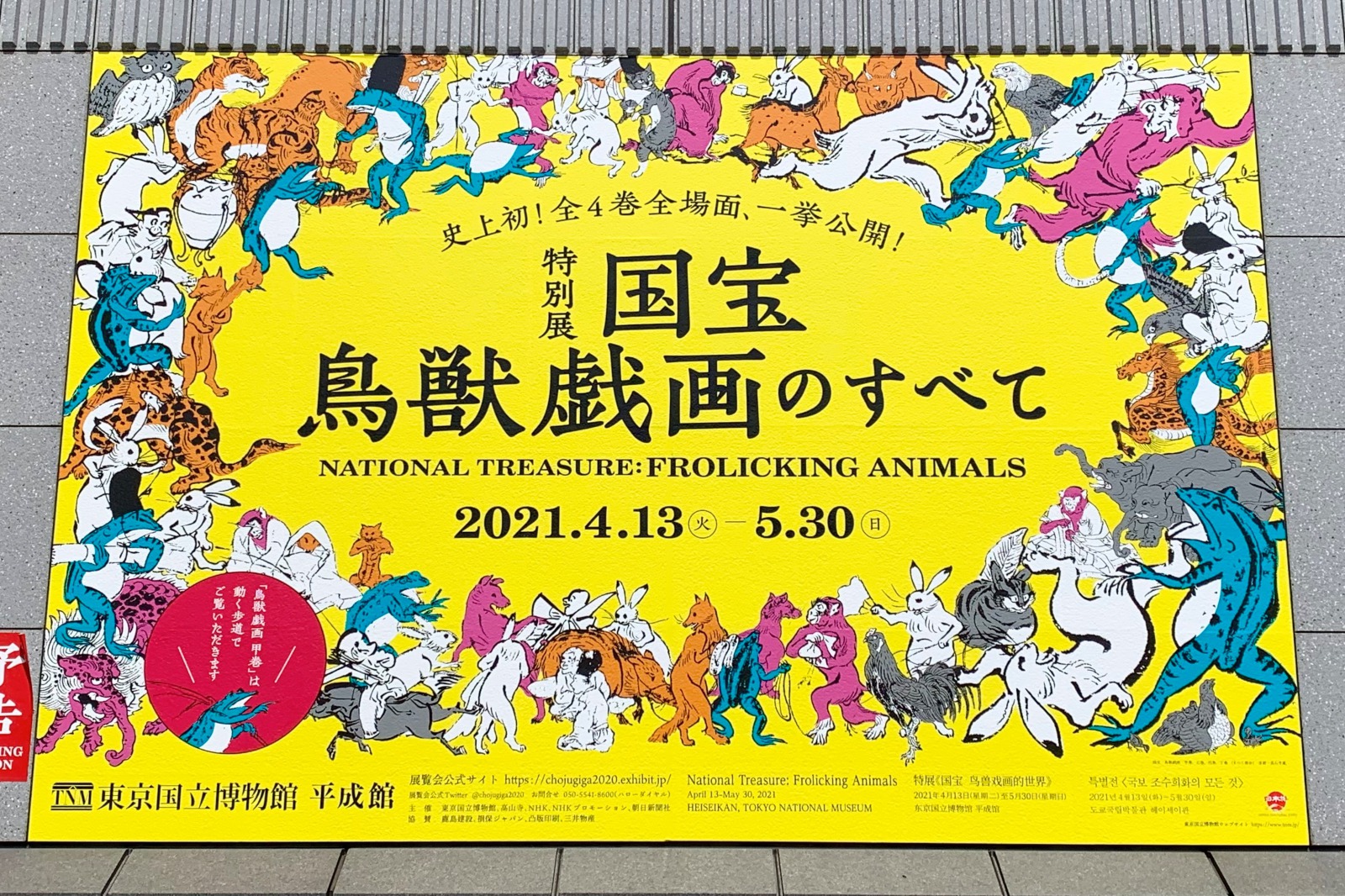 From April 13th to May 30th, 2021, a special exhibition "All about National Treasure Choju-Giga" is being held at the Tokyo National Museum in Ueno, Tokyo. * Added on June 1, 2021 The museum was temporarily closed to prevent the spread of the new coronavirus infection, but it resumed from June 1 and the session was extended until June 20. Please check the official website for the latest information.

One of the best masterpieces in the history of Japanese painting, "Choju-Giga," which vividly depicts anthropomorphic animals and people's activities, and continues to capture people's hearts over time. We covered this exhibition, which attracted a lot of attention in the first attempt in the history of the exhibition to release all four volumes and all scenes at once, so we will report on the contents and highlights of the exhibition.

* The session is divided into the first half (April 13th to May 9th) and the second half (May 11th to 30th). Regarding the works introduced with photographs in this article, all works that do not have a period notation in the information column at the bottom are exhibited for the entire period. 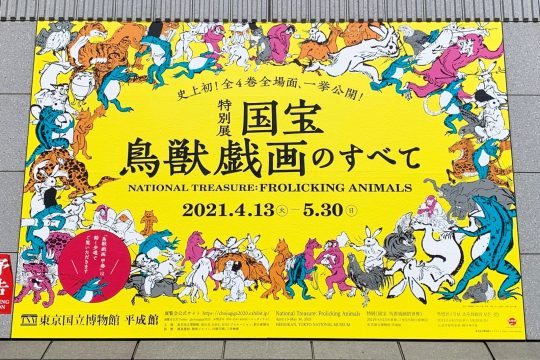 Don't you know it? The mysterious world of "Choju-Giga"

Along with "Genji Monogatari Emaki", "Ban Dainagon Ekomaki", and "Shigisan Engi", it is one of the four major picture scrolls in Japan.

It boasts an outstanding reputation among Japanese paintings, but "Choju-Giga" is also known as "Choju-Giga", and not only animals but also people are drawn, and there is not one painter involved in the production. I think there are surprisingly few people who have a complete picture of what is presumed to be. 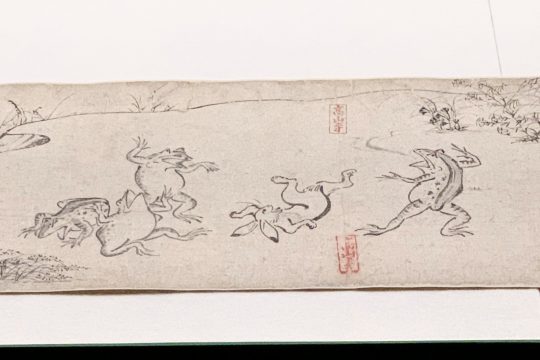 About 800 years ago, this work is said to have been drawn in stages from the end of the Heian period to the beginning of the Kamakura period, but in reality most of the detailed background, such as the author, the purpose of production, and the history of storage at Kozanji Temple, is It is a mysterious work that has not been clarified yet.

It is said that each of the four volumes is related, but it seems that it was not conceived as a series from the beginning …

There is no textual information called a word book written in a general picture scroll, and I don't even know if there is a common theme …

In other words, compared to the timeless sense of painting that you will never forget once you see it, the other information is a work that does not show its substance vaguely.

The only way to understand a work is to face it seriously, but there is no doubt that the unfamiliarity of its bottom is a factor that arouses the inquisitive minds of researchers and attracts us.

This exhibition is a unique opportunity to overlook the mysterious world of "Choju-Giga". 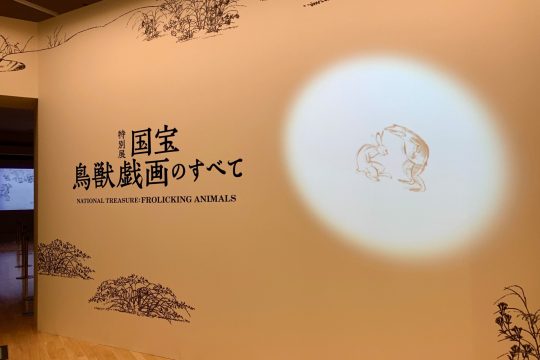 At the entrance, there is also a movie that moves the illustration of "Choju-Giga". 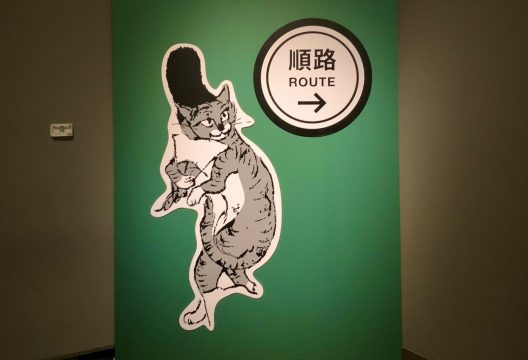 There are animals all over the venue and you can relax. 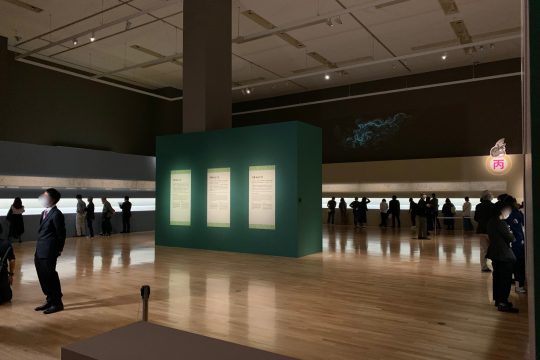 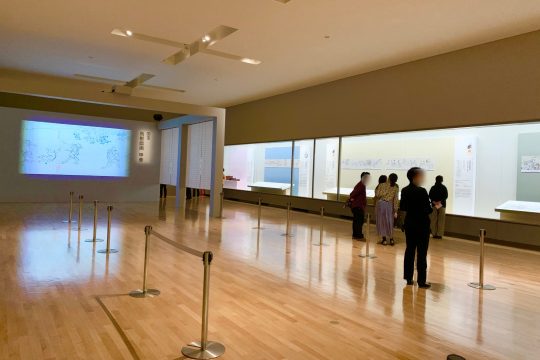 This exhibition, which uses the space of two venues luxuriously, consists of three chapters. From here, we will introduce the contents of each chapter's exhibition.

[Chapter 1] All of the national treasure Choju-Giga 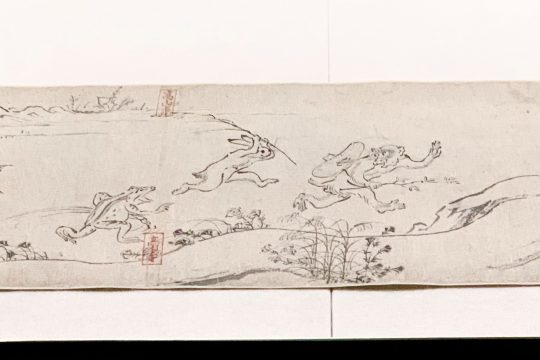 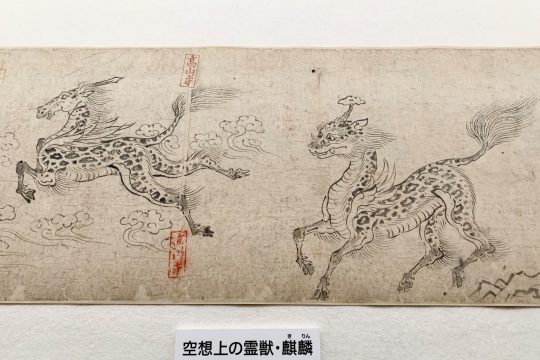 National Treasure "Choju-Giga Otomaki" (part) Heian period Kyoto Kozanji warehouse
Otomaki like an animal pictorial book in which 16 kinds of real and fantasy animals appear. Unlike the instep, the animals are not anthropomorphic. 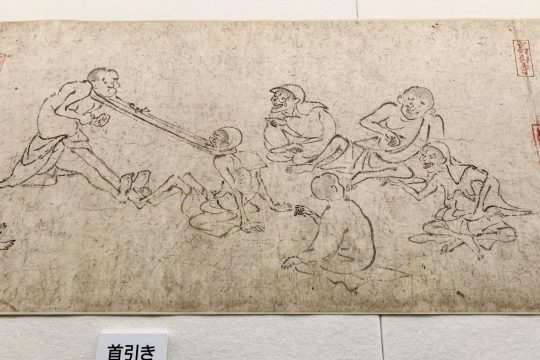 National Treasure "Choju-Giga Vol." It consists of drawn animal caricatures. The skillful writing of facial expressions of people is excellent. 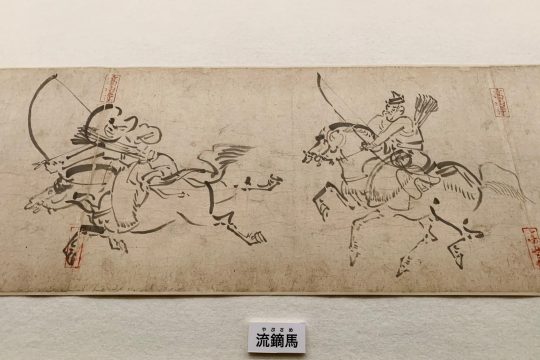 National Treasure "Choju-Giga Chomaki" (part) Kamakura period The Kozanji Kurachomaki in Kyoto is mainly composed of people, and the line drawing is thicker than the other three volumes, and it is characterized by a generous brush stroke. There are many screens based on the motifs of the instep and the Hinoe, and it is a fun volume to compare across volumes.

The main feature of Chapter 1 is the effort to display all four volumes of A, Otsu, Hei, and Ding, which total about 44 meters (!), All at once throughout the session. It will be an irresistible point for fans to be able to make a cross-sectional comparison of each volume, such as differences in brush strokes and expressions, which was not possible in the previous exhibitions where rewinding was carried out during the exhibition period.

Also, in Chapter 1, you can't miss the unprecedented challenge of setting up a moving walkway and letting you appreciate "Choju-Giga". 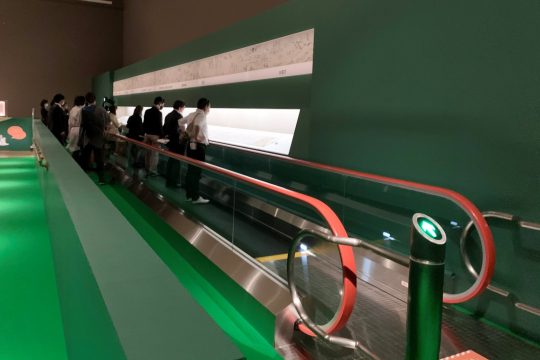 A moving walkway is installed in front of the instep.

I think that the one installed in front of the instep, which is probably the most popular, was designed to prevent new coronavirus infections, but it does not push against people and moves very slowly, so it is "too fast". There was no inconvenience such as "I couldn't see it!" … I felt that it was an epoch-making facility where everyone could take a closer look at the work in the front row.

In the first place, picture scrolls are enjoyed in a dynamic way of viewing, from right to left, unfolding, rolling up, and unfolding again. This attempt can be taken as a smart measure by the organizer, who wants you to feel as if you are unraveling the picture scroll yourself.

In Chapter 2, Duncan and that was the one screen of the partially missing picture scroll to the hanging scroll, is Reproductions that hold copies of the lost screen in the original are exhibited.

Actually, the original "Choju-Giga" that has been handed down to date has some missing screens, and it is said that the current Komaki is complicated (the order of the screens is changed). Therefore, in this exhibition, originals, sketches, and models will be gathered from home and abroad. I am trying to get a bird's-eye view of "all of the bird and beast caricatures" that once existed. 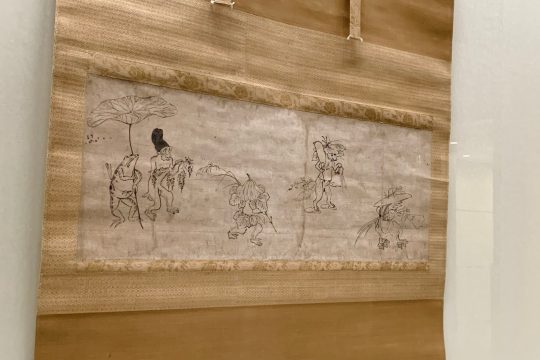 For example, on the left side of "Choju-Giga-Kansho (Tokyo National Museum)", you can see black dots under the lotus umbrella of the frog, which is connected to the Hagi flower drawn on the 16th paper of the current Komaki. Therefore, it turns out that this syllabary was originally located in front of the 16th paper. 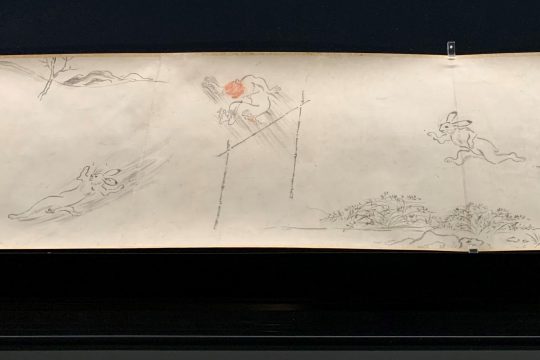 The contents of the screen correspond to the current Komaki 11th paper and later, "Choju-Giga Model (Nagao Family Old Collection)", which is said to be a copy of the state before Komaki became complicated. In addition, it is a very useful material to know the former instep, such as holding screens that can not be confirmed at present, such as rabbits and monkeys jumping high. 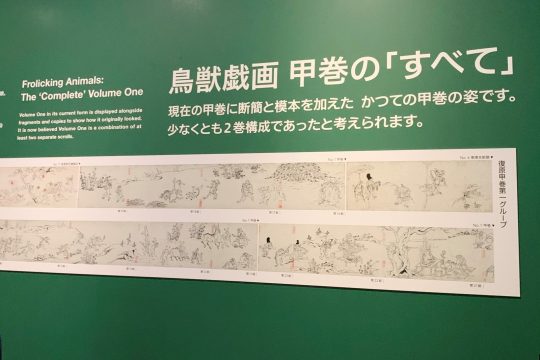 There is also a reference exhibition that introduces the appearance of the former Komaki in an easy-to-understand manner based on information on the sketches and samples.

Many people may be thrilled by the act of gathering various hints in this way and revealing the whole picture as if solving a mystery. If you go back to the original of Chapter 1 from here, it seems that you can enjoy it differently from the first viewing.

Kozanji Temple in Kyoto, which was founded in the Nara period and was revived in the Kamakura period by a scholar, Myoe Shonin, has many cultural assets in addition to "Choju-Giga".

Chapter 3 summarizes the important cultural property "Myoe Shonin Sitting Statue", which will be exhibited outside the temple for the first time in 28 years, the dream record "Yume no Ki" written by Myoe Shonin throughout his life, and the waka poems of Myoe Shonin. Works related to Kozanji Temple that show the personality of Myoe Shonin, who was loved by many people, such as Myoe Shonin Songbook, are on display. 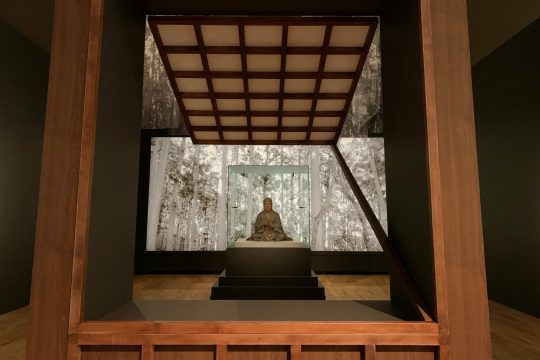 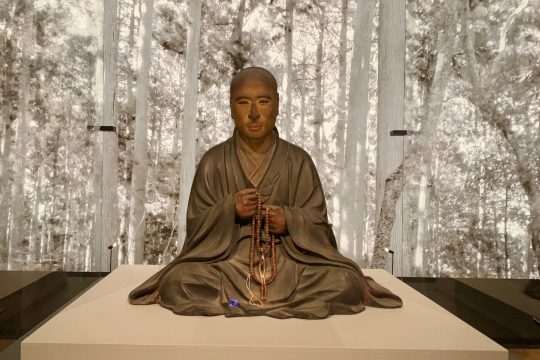 Important cultural property "Myoe Jojin sitting statue" Kamakura period A life-like wooden statue that looks like a living copy of the Kozanji temple in Kyoto. The right ear amputated for quest is also reproduced. The look that rigor and kindness coexist is impressive. 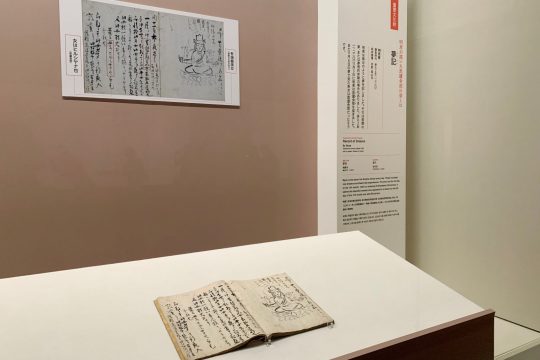 Important Cultural Property "Yumeki" Akie over the contents of the brush 1220 years Kyoto Kozan-ji Temple built the previous year exhibition <br /> saw a dream about 40 years, that was wrote in words and pictures that do not decorated Akie saint autograph book. It is a valuable existence that allows you to know the raw emotions of medieval religions. 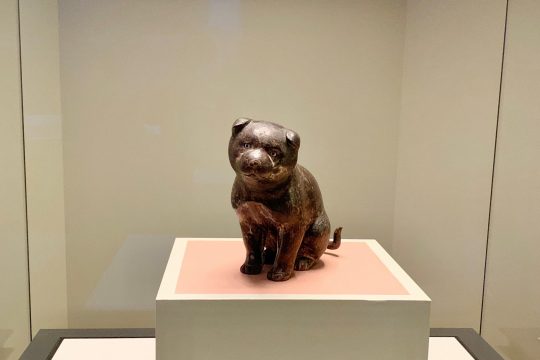 Important Cultural Property "Puppies" Kamakura period At the end of the exhibition at Kozanji Temple in Kyoto, the statue of a puppy with a cute squinting gesture that sees off visitors is a must-see. It is said that Myoe Shonin kept it at hand and loved it.

As I look at the items related to it, I feel somehow familiar with Myoe. Apparently, during the lifetime of Myoe Shonin, "Choju-Giga" was stored in a different place, but it is because Myoe Shonin laid the foundation for his love for small animals and vegetation. I imagined that "Caricature" had been carefully protected.

The more you see it, the more interesting it is! Comparison of 4 volumes of "Choju-Giga"

As mentioned above, the way to enjoy the whole volume and all scenes is a cross-sectional comparison. Here are some interesting things. 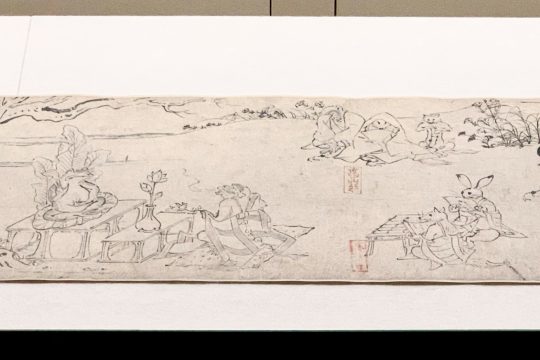 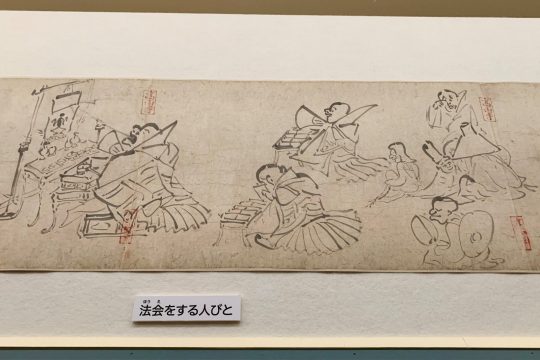 It is a scene of the Komaki and Chomaki Hoe. The crying monkey and the rabbit with a fan drawn on the instep volume are arranged as human beings who look and move in the same way in the chomaki. It is a very interesting composition that the motif parodyed by animals is further parodyed by humans. 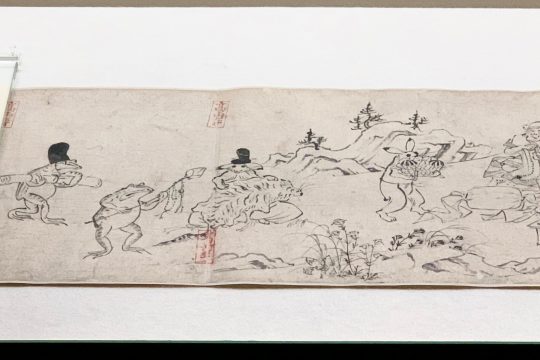 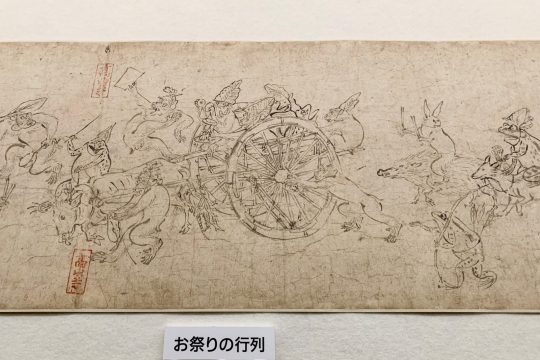 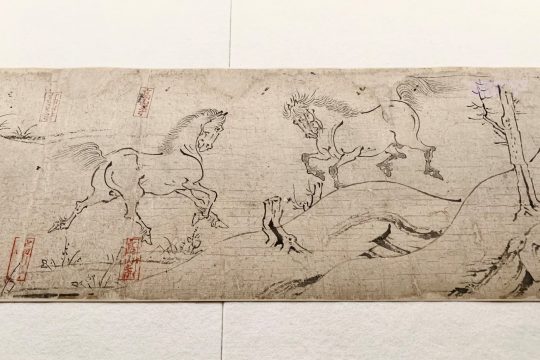 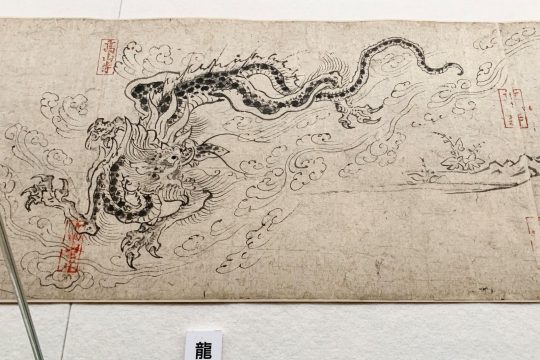 Otomaki, whose motifs are divided into Japanese animals in the first half and foreign animals and fantasy animals in the second half, is also interesting in the subtle differences in brush strokes.

Foreign animals and fantasy animals have a slightly cautious and solid brush stroke, but it is thought that this is not due to the difference between the painters, but because the painters drew with reference to the model. It's the result of faithfully drawing an example so as not to misrepresent an unknown animal. 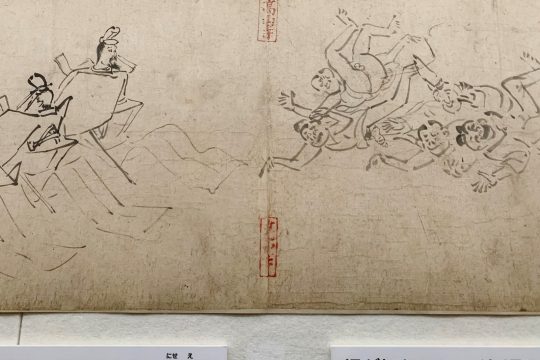 It's not a comparison across volumes and screens, but here's what you should check. At first glance, it is easy to think that it was written by a painter with a childish skill, but when you look at the face of a public-style man looking back on the left side of the screen, it is very easy to understand compared to the men making noise on the right side. You should be able to convey that you are "good".

The easy-going style of painting is a must-see because it is a point where you can understand that a painter with a certain skill dares to draw like that. 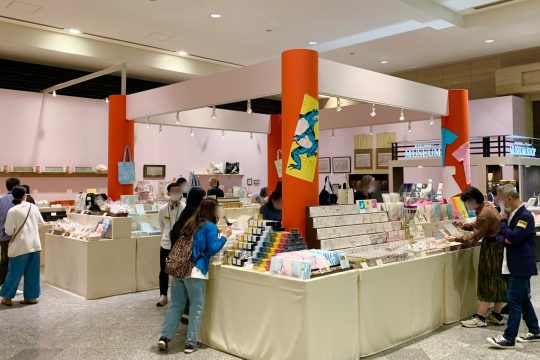 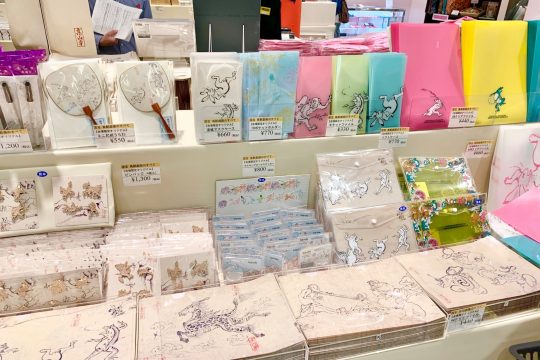 There are also many original goods limited to the venue.

At the museum shop, there are a lot of cute items such as T-shirts and masking tapes featuring the animals that appear in "Choju-Giga", but the most notable item is the almost full-scale whole volume and various articles. It will be an official catalog. It's a huge volume with over 400 pages and it's a definitive edition, so fans should check it out.

By the way, popular voice actors Koichi Yamadera and Ayumi Tsunematsu are in charge of the audio guide navigator for this exhibition. It is explained in plain language that even children can enjoy listening to with a light narrative, so please come along with the appreciation.

The world of "Choju-Giga" that grabs our hearts with a truly rich expression, even though it is a monochromatic line drawing with ink. It may be fun to visit this exhibition, read the work in your own way, and try to "solve the mystery".

<Overview of the special exhibition "All about National Treasure Choju-Giga">

* Advance reservations are required for this exhibition. You need to reserve a reserved-seat ticket online. Please check the official website of the exhibition for details. In addition, you can see the national treasure "Choju-Giga Komaki" on the moving walkway. 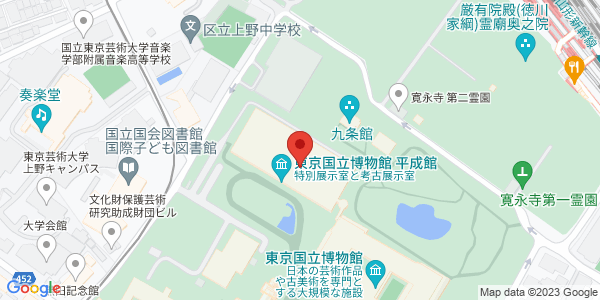