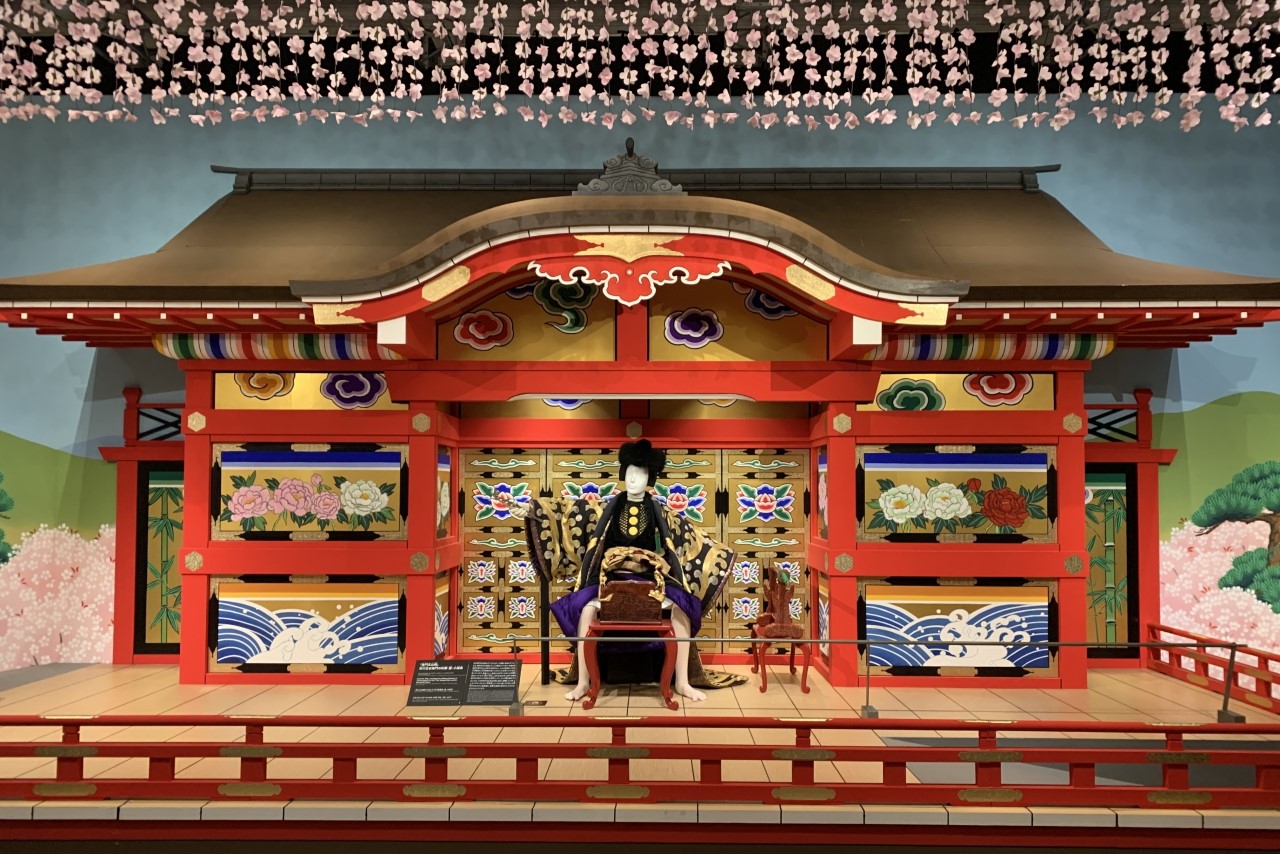 This exhibition where you can enjoy the unique beauty and "work" of the five traditional performing arts registered as UNESCO Intangible Cultural Heritage. The contents of 2020, which was canceled to prevent the spread of new coronavirus infection, have been partially renewed.

Since I participated in the press preview held prior to the event, I would like to report on the situation at the venue. 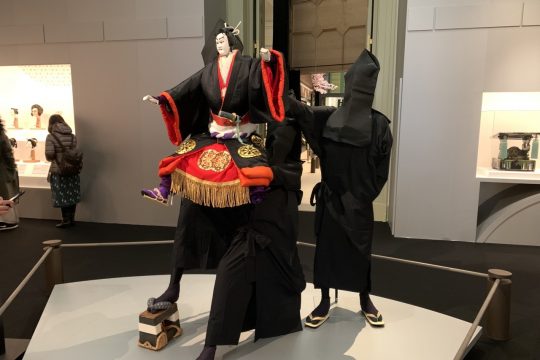 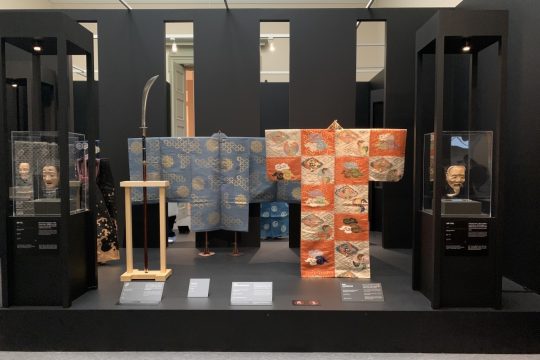 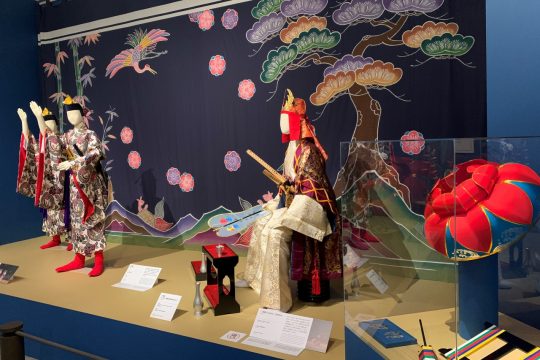 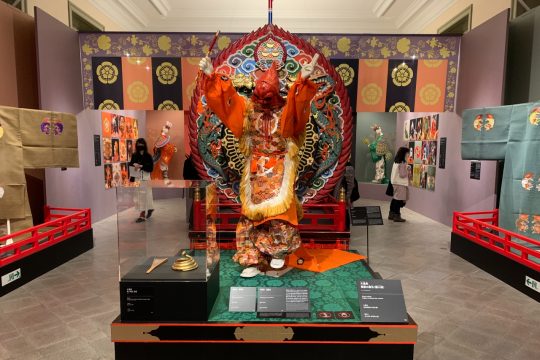 In this exhibition, we have gone through various histories such as the oldest gagaku, which was roughly formed in the Heian period, Nogaku, which was completed in the Muromachi period, Bunraku (Ningyo Joruri) dating back to the early Edo period, Kabuki, and Kumi Odori. It is a content that you can enjoy by viewing the traditional Japanese performing arts that continue to live in.

Specifically, a part of each entertainment stage is reproduced in a size close to the actual size. At the same time, we introduce costumes, musical instruments, props, and valuable video materials that were actually used on the stage. 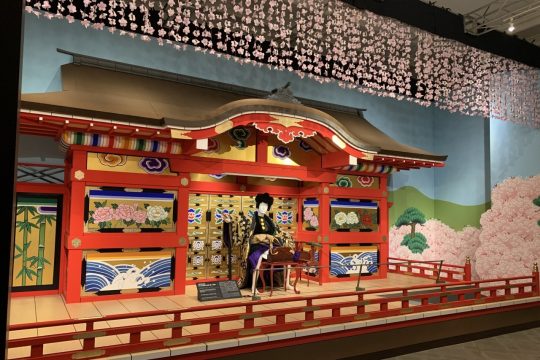 "Kinmon Gosan no Kiri" where the costume of Ishikawa Goemon is enshrined.

Some of the reproduction stages are designed so that visitors can experience the stage space from the actor's point of view, and the atmosphere is especially enjoyable at the Kabuki "Kinmon Gosan no Kiri" stage immediately after entering the venue. .. A number of hanging branches of cherry blossoms hang down at the top of the colorful temple architecture, and the gorgeous and spectacular three-dimensional exhibition of Ishikawa Goemon shows its presence in the center. 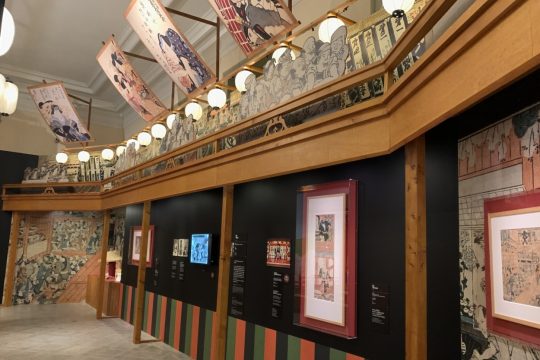 It is also noteworthy that the entire room where the stage is placed is colored like a playhouse in the Edo period with graphics and lanterns of people who are bustling on the pier. On display on the wall is a nishiki-e depicting a Kabuki actor. In addition, the screening of Japan's oldest movie "Momijigari" starring Ichikawa Danjuro 9th and Kikugoro Onoe 5th.

In a space that expresses the spirit of Kabuki that enlivens the festive mood with gorgeous colors, it invites visitors to the extraordinary world at once.

The costumes of Kamakura Gongoro Kagemasa of "Temporary" are plentiful! Powerful exhibition work 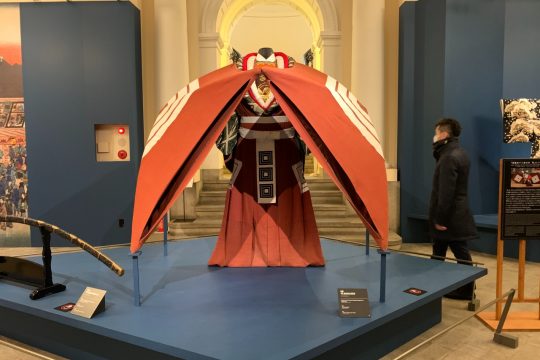 Here are some of the works that caught the eye of this exhibition.

First of all, here is a costume that expresses the superhuman power of Kamakura Gongoro Kagemasa, one of the eighteenth Kabuki. You will be amazed at the majesty of the sleeves of the large crest, which is the white crest of the three squares! Seen from the side, it looks more like a kite than a sleeve.

I remembered that the costume of Superman Kamakura Gongoro Kagemasa was out of the standard, but it was so exaggerated that I really laughed when I saw the real thing. How many tens of kilometers are there … Since you are going to be rampaged by wearing something like this, it is a presence that you will be convinced without asking questions if it is decided to be strong. 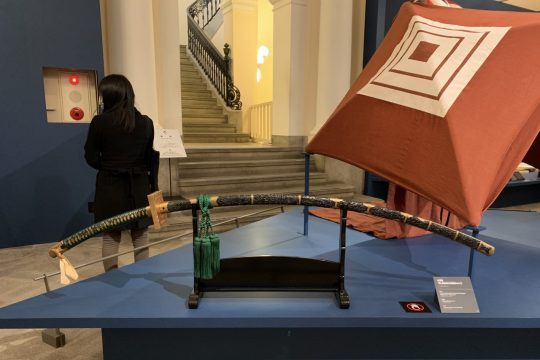 Next to it is a large sword that exceeds 2M of Kagemasa. The scene in which Kamakura daringly cuts off the necks of many people with just one swing of this Ōdachi is one of the most impressive scenes in the "temporary", but it was powerful enough to make me think that it was possible. 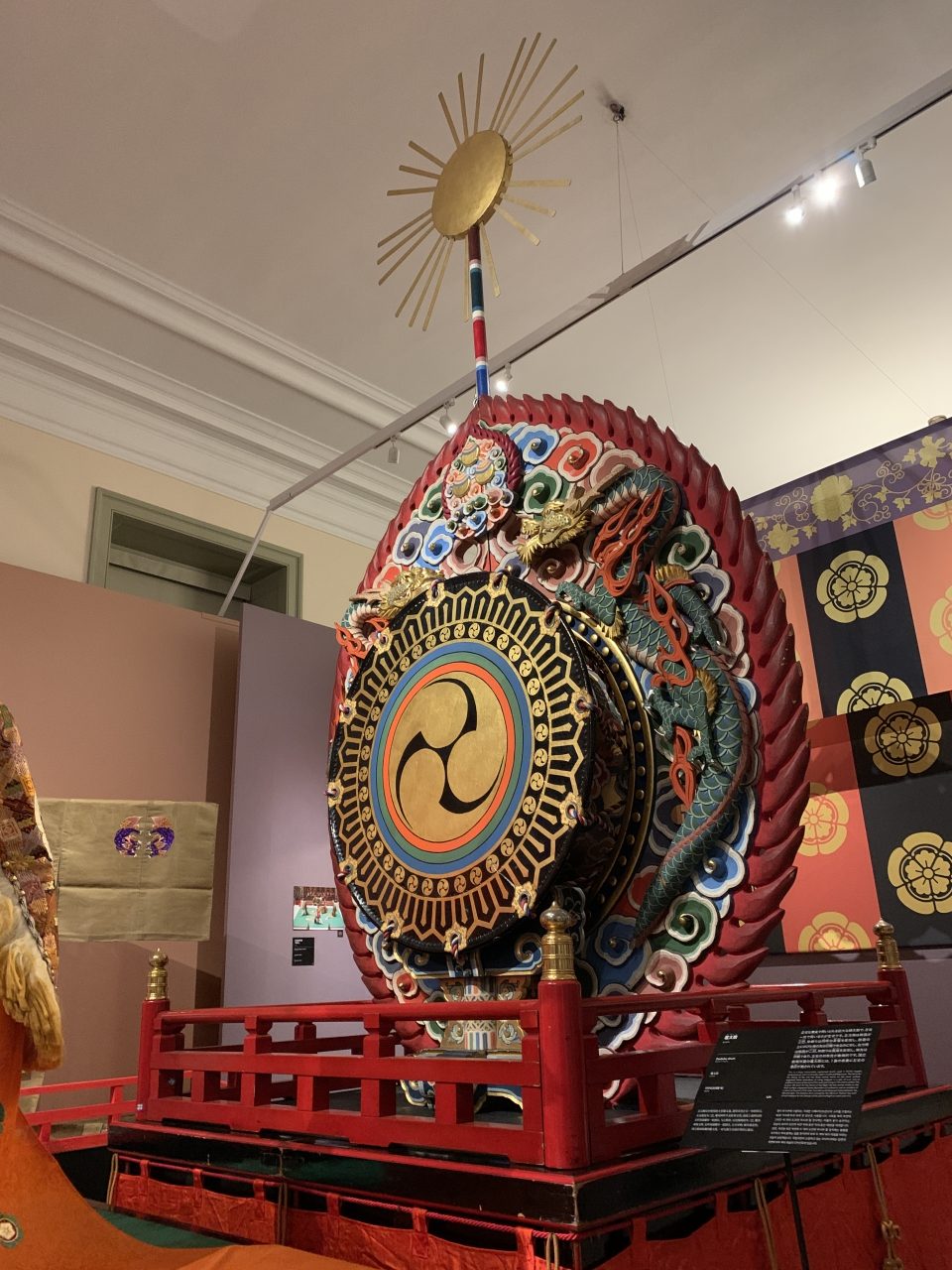 You will be overwhelmed by the Daiko drums displayed in the Gagaku area. What kind of prop is this colorful object? When I read the explanation, I was very surprised that it was an instrument. It is a huge taiko drum used for formal dance, and it is originally a pair of left and right drums, but the taiko drums in the National Theater of Japan have left and right decorations on the front and back.

At the top are a sun ring and a moon ring, a large flame and a five-colored cloud shape surrounding the drum, sculptures of a rising dragon and a phoenix on the left and right, and gold leaf on the leather of the drum. Various patterns and colors that indicate auspiciousness are used, and 5M, combined with the probable giant body, made me feel the power that makes me want to worship just by looking at it. I'm wondering what kind of sound it makes!

Fascinated by the delicate beauty of costumes and props 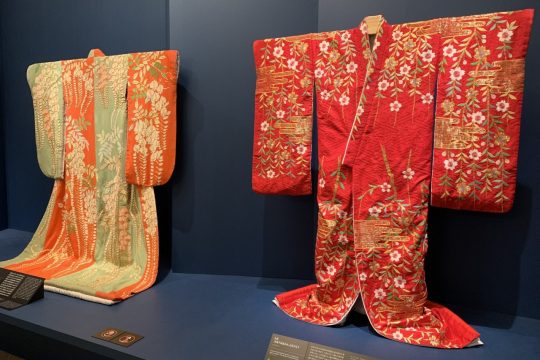 The real thrill of this exhibition is that you can appreciate the details of the costume and prop designs that you cannot understand from the audience seats of the theater. 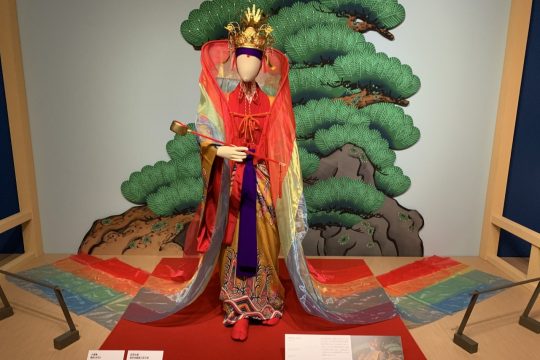 What was so vivid as to wake up was the three-dimensional exhibition of the celestial maiden of the Kumi Odori "Mekaru" based on the legend of Hagoromo.

The author, who lives in the Kanto region, didn't have much chance to come into contact with Okinawa's performing arts, Kumi Odori, so the unique shape of the raging waves depicted in the Bingata costume "Yellow ground phoenix Tachinami pattern" worn by the celestial maiden. Looks fresh. Bingata, which is characterized by its splendid multicolored color, is said to be a pattern dyeing peculiar to Okinawa.

The appearance of wearing a swan maiden that seems to express a rainbow-like brilliance will surely look many times more graceful than the exhibition if you move. During this exhibition, I was interested in the difference in the color sense of Kumi Odori, especially the way of incorporating red, when compared to the mainland entertainment. 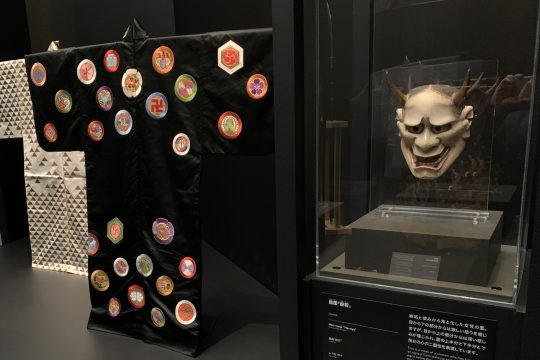 In the Nogaku area, we introduce standing by combining faces, costumes, and props for each role, but there are things that are particularly drawn to standing by the appearance of a demon.

"Hannya", who becomes a demon from jealousy and resentment and is a female face, is familiar because it expresses the duality of anger from the bottom of the eyes and deep sadness from the top of the eyes. In addition to the mystery of being on the border between the mystery and this world, I once again enjoyed the modeling that conveys many intertwined emotions, such as the unwillingness to become a demon and the sadness of being at the mercy of emotions.

The costume for the role of such a demon is "black background pattern sewing foil". Various patterns are studded with embroidery and gold / silver foil, and it is an elegant but playful design. Each pattern with cherry blossoms, plums, chrysanthemums, etc. as a motif has a cute color, so why is this exclusively for demons? I have some doubts, but …

As with family crests, even with one of these small patterns, we cannot help but feel the aesthetic sense of the Japanese people who have been involved in nature such as the four seasons and Kacho Fugetsu, and have incorporated nature into their lives and coexisted with it. 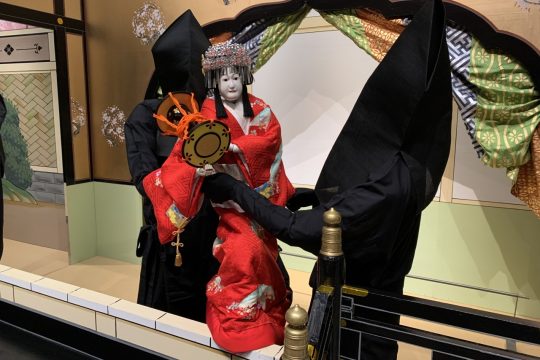 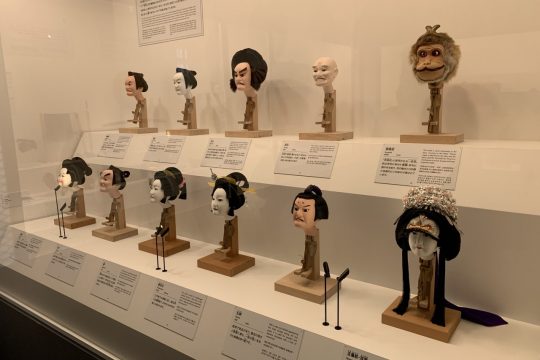 In the Bunraku area, you can see the gorgeous Joruri doll costumes that are not inferior to human size, such as "Yoshitsune Senbonzakura" Shizuka Gozen, but the display of the doll's neck is also interesting.

It seems that each neck has a shape that expresses the fundamental character of "sexual root", for example, "Bunshichi" used for tragic heroes, etc. "Matahira" used for straightforward roles was introduced.

Even if you don't read the explanation, I'm impressed because you can understand the general image of the person, "I wonder if it will be used in such a role." It seems like nothing, but it's actually amazing. I would like you to take a closer look at the beauty of the sculpture that has been refined and refined to the present day. 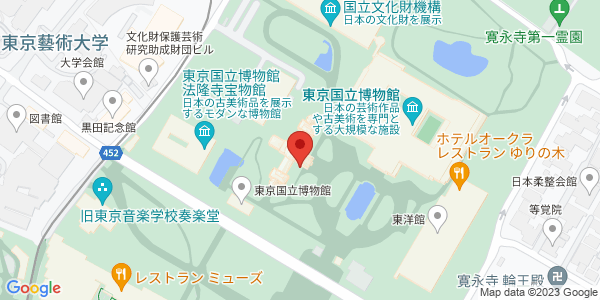