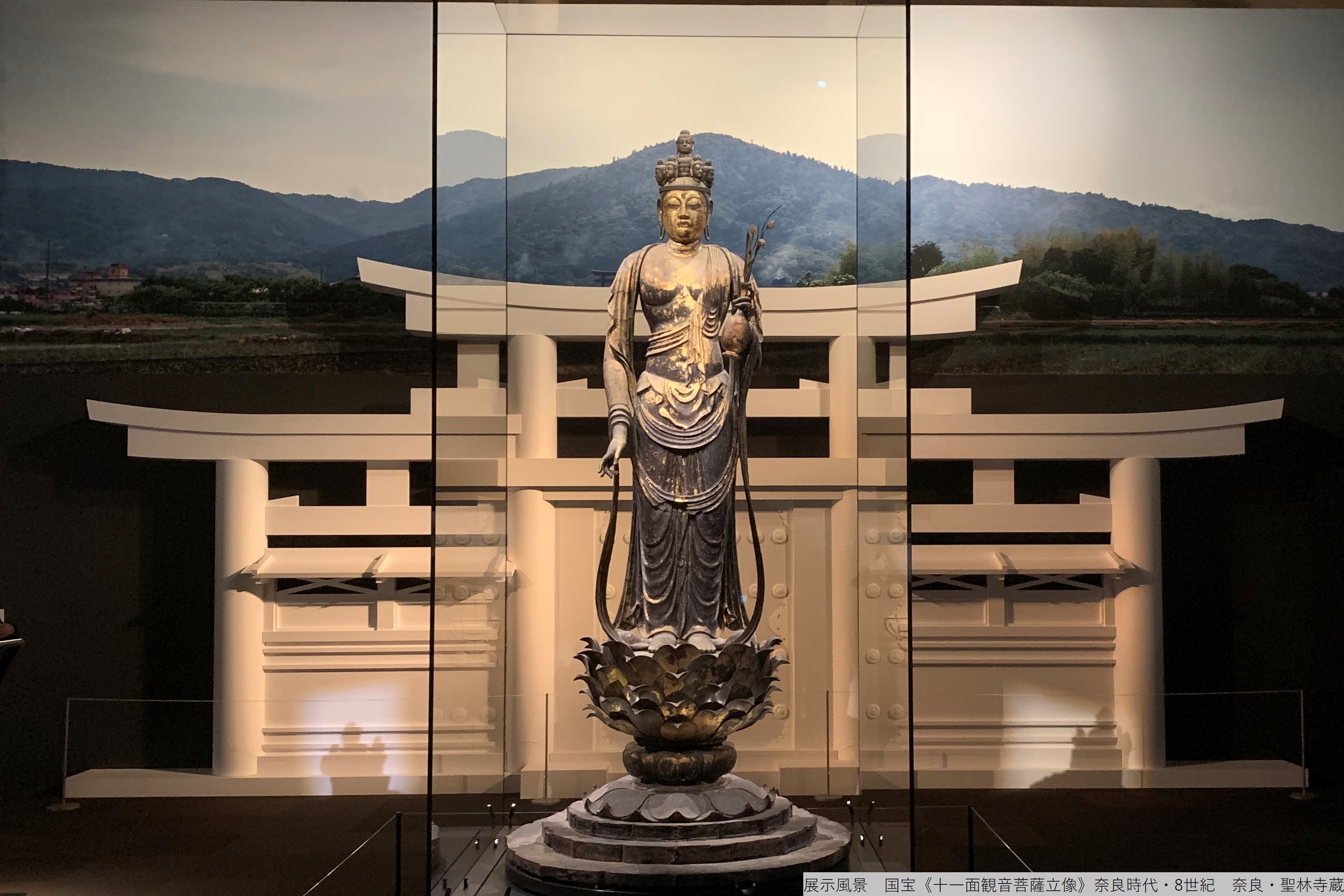 From June 22nd (Tuesday) to September 12th (Sunday), 2021, a special exhibition "National Treasure Seirinji Eleven-faced Kannon-Miwayama Faith Mihotoke" is being held at the Tokyo National Museum in Ueno, Tokyo. is.

This exhibition attracts attention as the national treasure "Eleven-faced Guanyin Bodhisattva Statue", which is said to be the masterpiece of Japanese sculpture due to its exceptional beauty, is exhibited outside Nara Prefecture for the first time in history. Since I participated in the press preview, I will report on the situation at the venue. 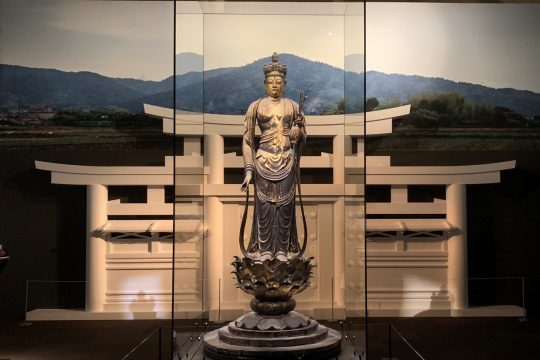 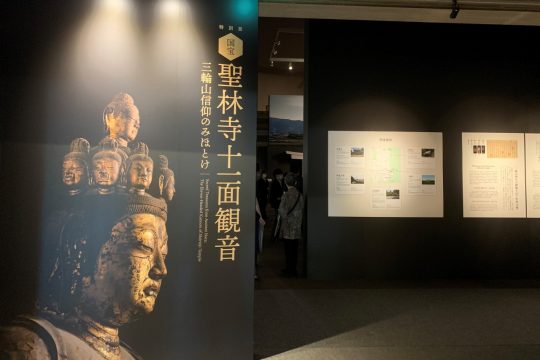 Buddha statues related to Oomiwa Shrine reunited for the first time in about 150 years!

The national treasure "Eleven-faced Kannon Bosatsu Statue", which is the main character of this exhibition, is owned by Shorinji Temple in Sakurai City, Nara Prefecture, but until the Edo period, it was enshrined at Oomiwa Shrine in the same city, not at Shorinji Temple. Did you know that it was done?

Oomiwa Shrine with Mt. Miwa as the deity that conveys the ancient Japanese belief in nature to the present day. In the Nara period, the introduction of Buddhism promoted Shinto-Buddhist training, and Oomiwa-ji Temple (renamed to Oomiwa-ji Temple in the Kamakura period) was built in the precincts of Oomiwa Shrine, and many Buddhist statues are now enshrined.

However, when the Meiji government's Shinbutsu bunri decree caused a wave of abolition of Buddha, Daimiwaji became an abandoned temple. Buddha statues are also forced to move to nearby temples such as Shorinji Temple, which they have a close relationship with. 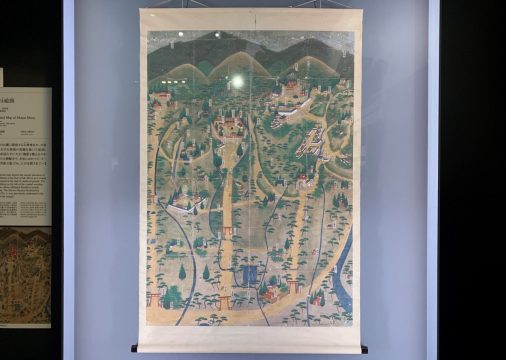 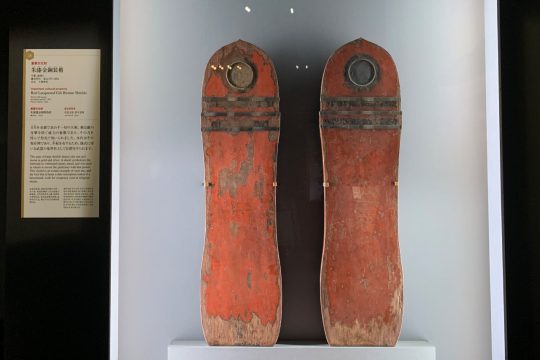 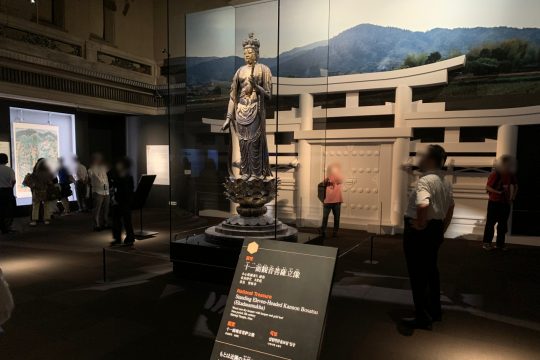 The national treasure "Eleven-faced Kannon Bodhisattva Statue" is settled in the center in a clean atmosphere. Behind the statue is a reproduction of the three torii gates of Oomiwa Shrine. It is not the main shrine that continues from the torii gate, but Mt. Miwa, which visually conveys the form of natural beliefs at Oomiwa Shrine. 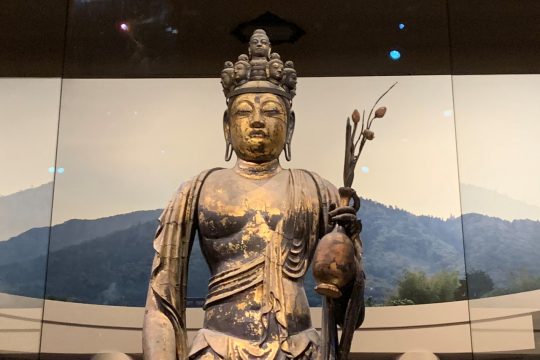 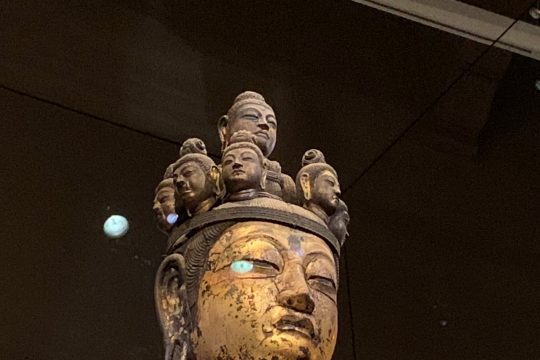 The current national treasure "Eleven-faced Kannon Bodhisattva Statue" has lost three sides. Therefore, unfortunately, it is not possible to check only the "laughing face", but since the venue is arranged so that you can watch it from anywhere in the front, back, left and right, it is a nice point to enjoy all the existing faces with the naked eye. 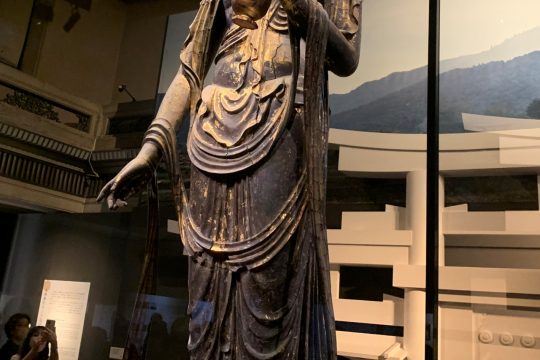 Most of the pre-modern Buddhist statues that exist in Japan are made of wood, but in the Nara period and around the latter half of the 8th century, a technique called dry lacquer was used for production. This statue is also one of those made by "Kishin dry lacquer ware", which is made by molding lacquer and wood powder kneaded material called Kokuso lacquer on the wood core.

Wooden lacquer is said to be suitable for realistic expression because it is made by raising lacquer instead of scraping it. In this statue, the loose curves of the folds of the heavenly garment that seem to be covered with wind, the tension of the flesh, the undulations of the eyelids that make you feel the presence of the eyeballs, and the orderly appearance of the hairline are expressions unique to wooden lacquer Is the highlight. 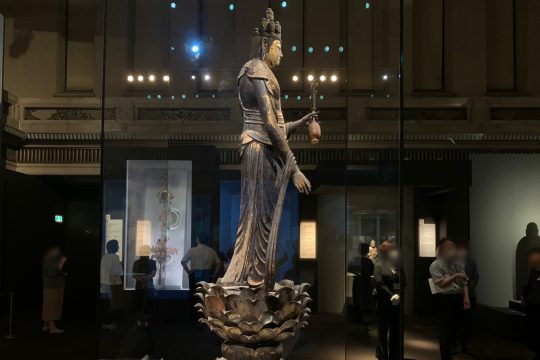 From the side, you can see the slender proportions of 8 life, the thickness of the chest, and how to place the center of gravity. The posture with the head of a solemn face slightly forward seems to be trying to capture the appearance of people firmly. 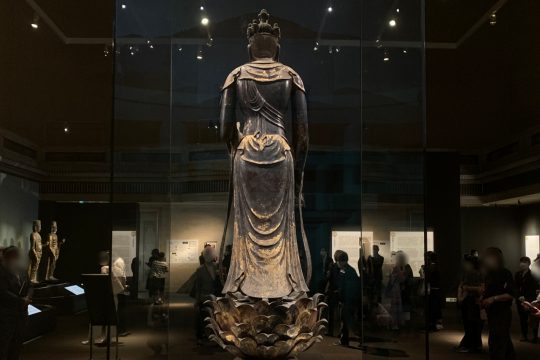 The rear view is a gem of beauty, not to mention the smoothness of the back, but especially the graceful appearance that the curve of the clothes from the waist to the legs is fascinating is a must-see. The contrast between the gold leaf that has been peeled off in places and the glossy black color of the ground creates a shadow with an atmosphere.

If you look closely at the details, you will also be fascinated by the gentleness of the fingers of your left hand holding the treasure bottle and your right hand lowered. The pedestal with a lotus flower motif also has the gorgeousness of Tenpyo art. It makes me realize that the reputation of being "the masterpiece of Japanese art" is not an exaggeration. 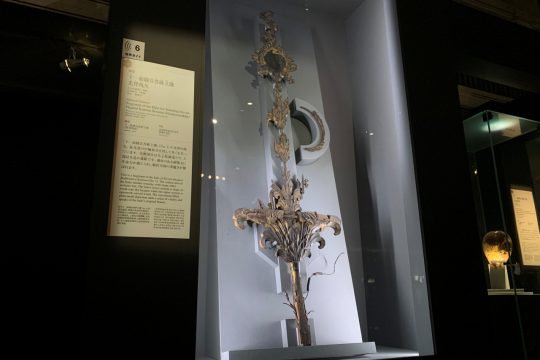 In addition, a halo that visually expresses the halo of the gods and Buddha is also on display. Nowadays, most of it is lost except for the shaft part, but it is speculated that it was originally a halo that engraves a triple sphere and arabesque. The splendor of the past days is remembered. 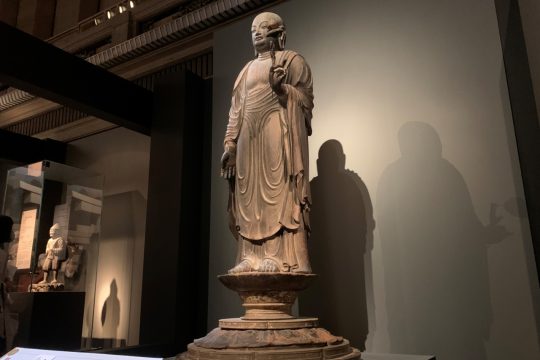 The national treasure "Jizo Bosatsu Statue", which was once placed next to the eleven-faced Kannon at Omiwaji Temple, is a Buddhist statue carved from a single piece of wood except for the hands of both hands. The thick body is full of realism, as if a single tree were standing there. 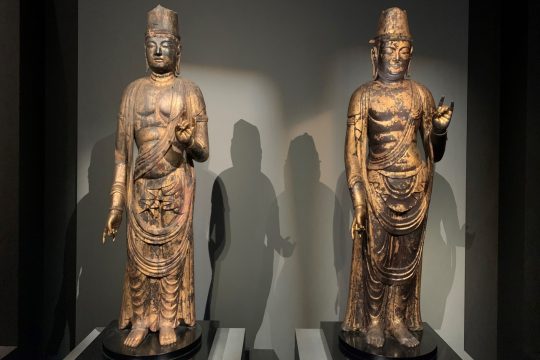 The "Nikko Bosatsu Statue" and "Moonlight Bosatsu Statue" look exactly like each other, but it is interesting that the materials, structural techniques, and styles are different, and it seems that they were not originally one tool. The Nikko Bodhisattva has a large nose, and the Moonlight Bodhisattva has a long and gentle expression, and the area around the chin looks refreshing. 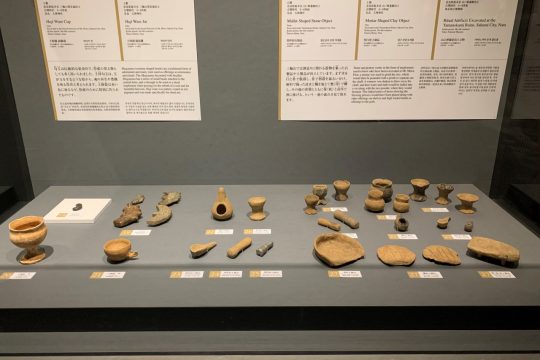 In this exhibition, the ones excavated at Mt. Miwa Forbidden Land and Yamanokami Heritage are also exhibited, but most of them are imitations in the shape of tools used for some kind of ritual. The most eye-catching are the stone products and earthenware that are shaped like the utensils related to sake brewing.
It was interesting to see that the brewing beliefs of Oomiwa Shrine, which remains to this day, can be traced back to the Kofun period from the existence of excavated items, assuming that Omononushi, the deity of Oomiwa Shrine, is the god of sake. .. 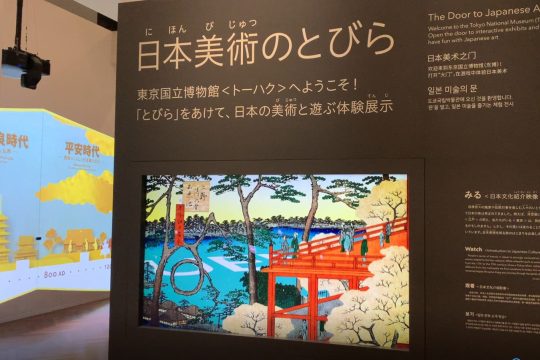 Part of the huge screen of "Japanese Art Tobira"

At the same time as the opening of this exhibition, a new permanent experience exhibition called "Japanese Art Tobira" was released in the special 3 rooms of the main building of the Tokyo National Museum. If you move your hand in front of a huge screen where you can learn about the history of Japanese art, you can experience interactive experiences such as rotating the displayed pop-up of Japanese art and turning pages. You can also appreciate masterpieces such as "Wind" and "Flowering Plants of Summer".

Advance reservations are required, but you can enter it as it is with the admission fee for the special exhibition, so why not take a tour together? 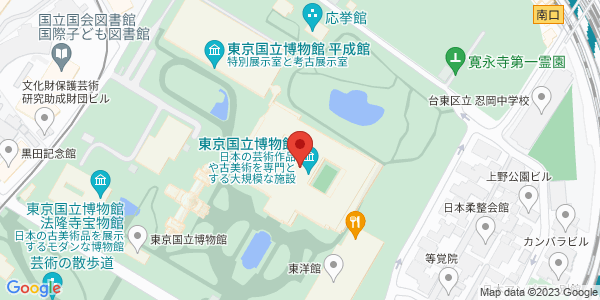