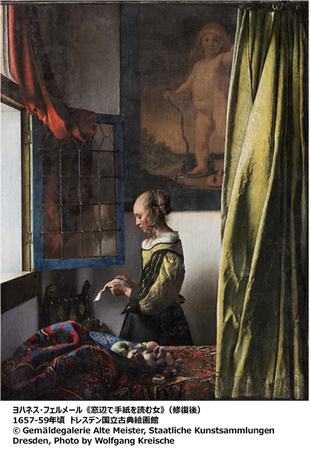 The Dresden National Classical Painting Museum in Germany held a press conference on September 9, and the restoration of Johannes Vermeer's (1632-75) early masterpiece "Girl Reading a Letter at the Window" was completed. Was announced, and the restored work was released to the press for the first time. In a project that began in 2017, a large overcoat that was hiding Cupid's picture-in-picture with a bow in the background turned out to have been done by someone after Vermeer's death, and that overcoat layer. A repair was also done to remove the. This work is open to the public at the Vermeer-focused exhibition that began on September 10th in the collection. "Fermer and 17th Century Dutch Painting Exhibition in the Dresden National Classical Painting Museum" to be held at the Tokyo Metropolitan Art Museum (Ueno Park, Tokyo) from Saturday, January 22nd next year (sponsored by the Tokyo Metropolitan Art Museum) It will be exhibited at the Tokyo Metropolitan Art Museum, Sankei Shimbun, and Fuji Television), and will be released in sequence in the three cities of Hokkaido, Osaka, and Miyagi.

Johannes Vermeer's "Girl Reading a Letter at the Window" by Johannes Vermeer, a master of Dutch painting in the 17th century, is a featured work of this exhibition. It is an early masterpiece that is said to have established the style. In 1979, an X-ray survey revealed that the wall was painted with Cupid's picture-in-picture, and for many years it was thought that Vermeer himself erased the picture. However, a 2017 survey revealed that it had been erased by someone other than Vermeer, and from the following year, restoration was being carried out to remove the topcoat layer of the picture-in-picture. After the restoration, the director of the museum, Stephan Koya, said, "The restoration of Cupid in the background reveals the true intentions of the painter. A fundamental message about true love that goes beyond the context of mere love. That's it. " The appearance of Cupid's picture-in-picture has an impact on the interpretation of the painting itself, and further research and research is expected in the future. 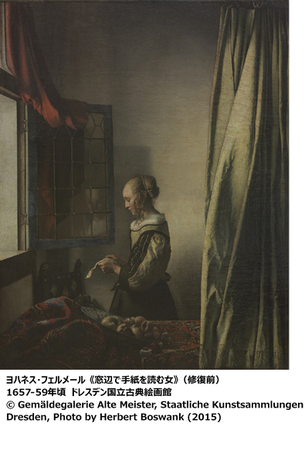 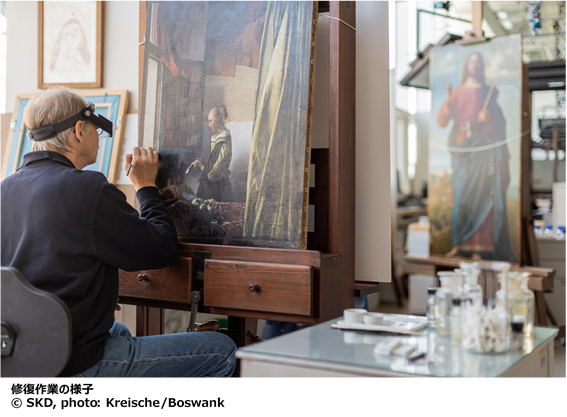 ● Introducing the process of the restoration project
Cupid gradually emerges after carefully removing the overcoated paint layer. We will introduce the restoration process with videos.
● 17th Century Dutch Painting Collection, proud of the Dresden National Classical Painting Museum
Not only Vermeer, but also about 70 masterpieces of 17th century Dutch painters such as Rembrandt, Metsu and Van Ruisdal will be exhibited.