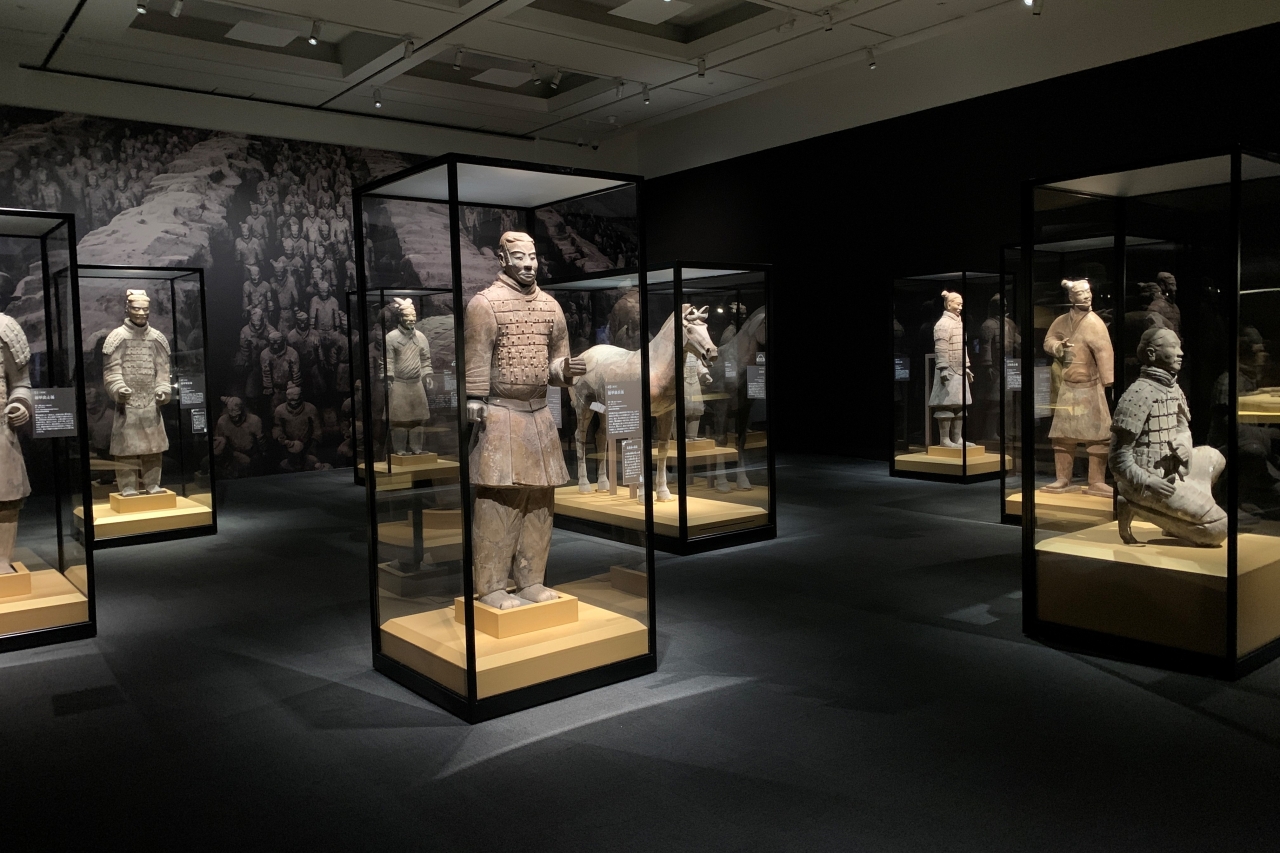 An exhibition commemorating the 50th anniversary of the normalization of diplomatic relations between Japan and China, "Terracotta Warriors and Ancient China – Heritage of the Qin and Han Civilizations -" opened on November 22, 2022 at the Ueno Royal Museum. (Exhibition period is until February 5, 2023)

This exhibition introduces the heritage of ancient Chinese civilization with about 200 precious cultural relics, centering on 36 terracotta warriors. I covered the press preview held the day before the opening, so I will report on the state of the exhibition. 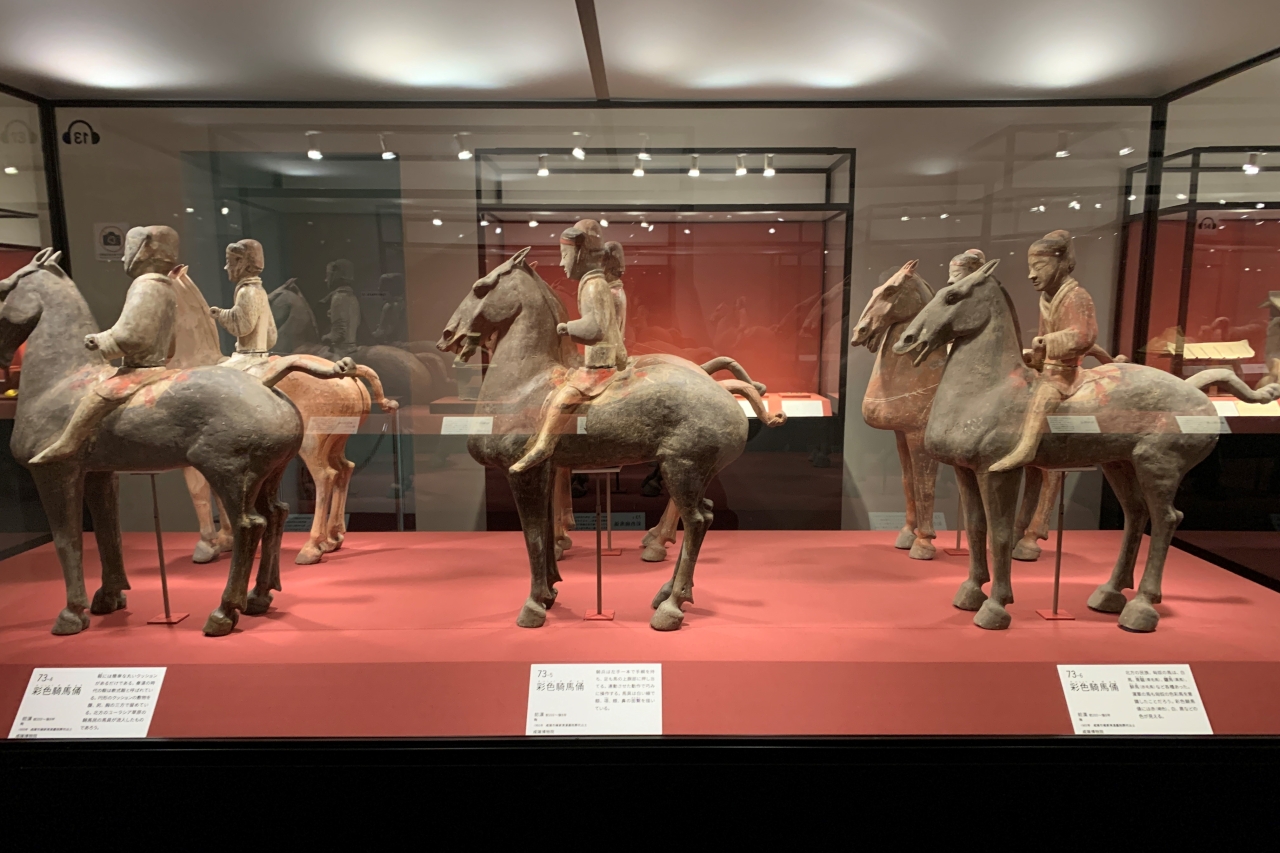 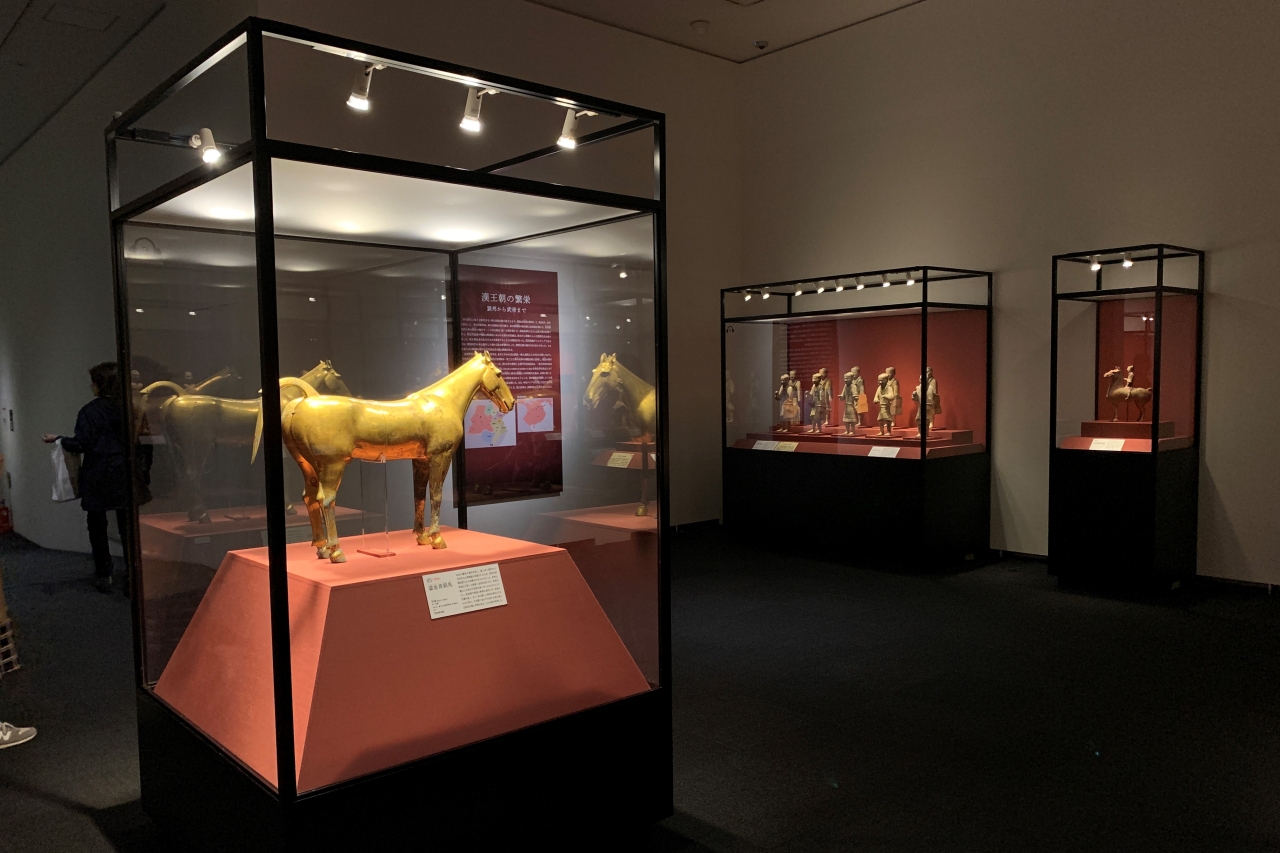 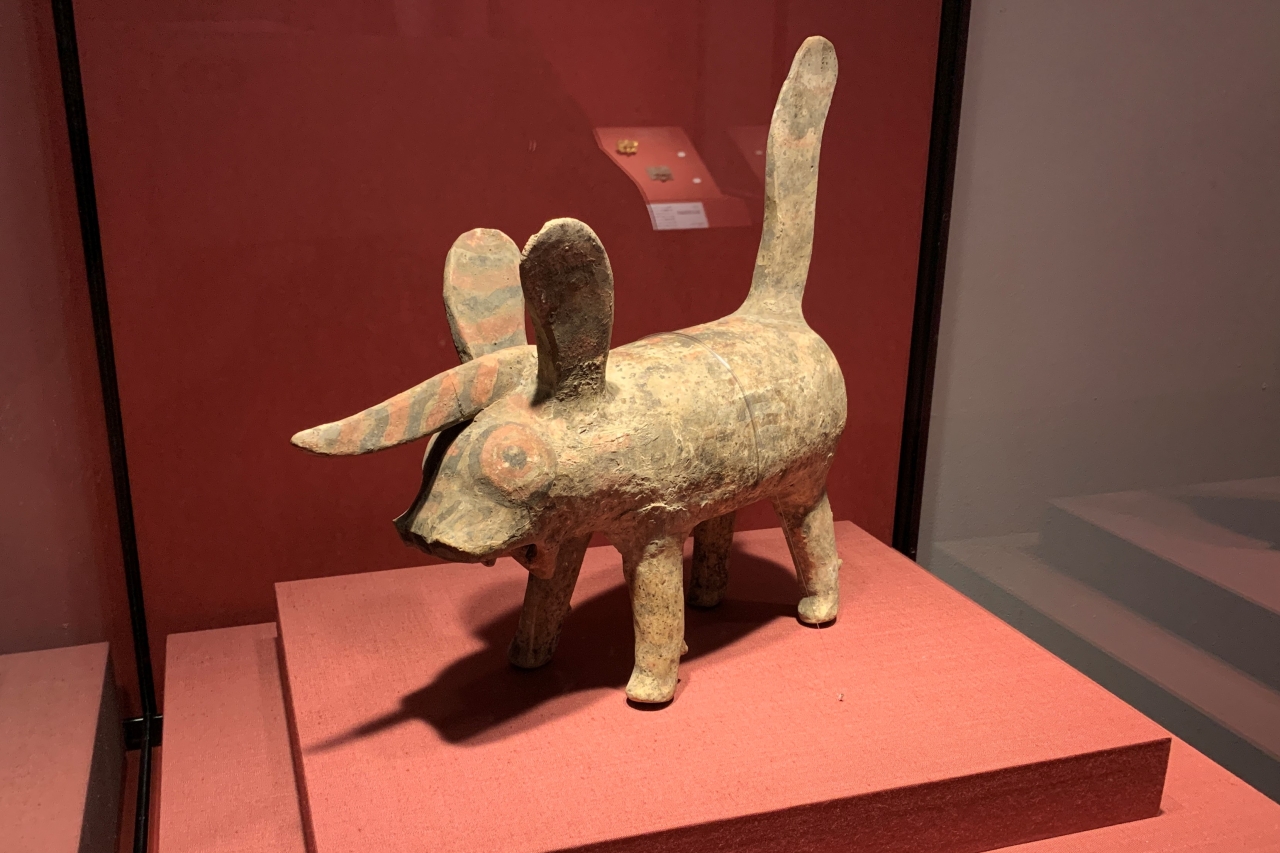 Yo is a human figure made of wood and earth that was buried with the body of a powerful person in ancient China.

In 1974, when a farmer was digging a well about 1.5km away from the Mausoleum of the First Emperor, a large number of almost life-size figures of soldiers and horses with different faces and clothes were unearthed. Investigation revealed that the terracotta warriors were placed underground to protect the Qin Shi Huang after his death, making it one of the greatest archaeological discoveries of the 20th century. Excavation work is still ongoing, but the number is estimated to be about 8,000.

In 221 B.C., the Spring and Autumn Warring States period ended when seven kingdoms fought against each other, and the Qin Dynasty of Shi Huang, the first emperor to establish a unified dynasty in Chinese history, fell in just over ten years. .

This exhibition focuses on the Qin dynasty and excavated artifacts from Guanzhong (current Shaanxi province), the central region of the Han dynasty, which is said to be the golden age of ancient China, founded by Liu Bang after the Qin Dynasty fell in 202 BC. In addition, about 200 items will be introduced, including first-class cultural relics (a unique Chinese classification that refers to the highest grade valuable cultural relics) that have been exhibited in Japan for the first time. 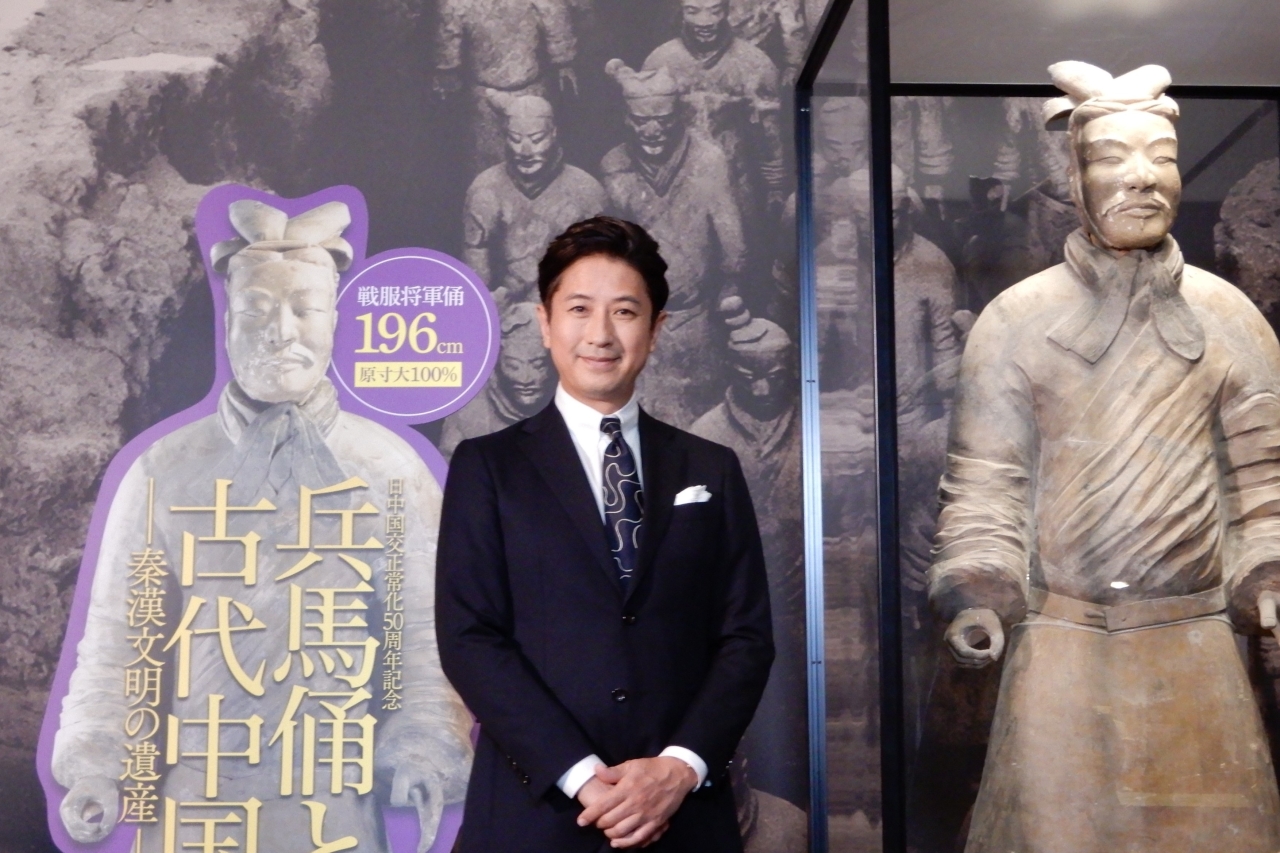 Actor Shosuke Tanihara, who was the navigator of the exhibition and also narrated the audio guide, rushed to the opening event.

Looking at the terracotta warriors lined up at the venue, he commented, "It's a masterpiece. I was surprised by the size of its presence as an object." “Among the things that have been made for a long time, pottery and metal items tend to survive. I really felt it," he said, describing his impressions after visiting the venue.

In addition, this exhibition has a corner that collaborated with the popular manga "Kingdom" depicting the Spring and Autumn Warring States period, and he himself is a big fan of the work. Please come to this exhibition to experience this."

Valuable shogun figures will be exhibited for the first time in Japan!

At the venue, historical materials covering approximately 1,000 years from the relocation of the capital of the Zhou Dynasty in 770 B.C. to the fall of the Han Dynasty in 220 B.C. It is introduced in three chapters , "Birth of the Dynasty-Era of the First Emperor" and "Chapter 3 Prosperity of the Han Dynasty-From Liu Bang to Emperor Wu" . 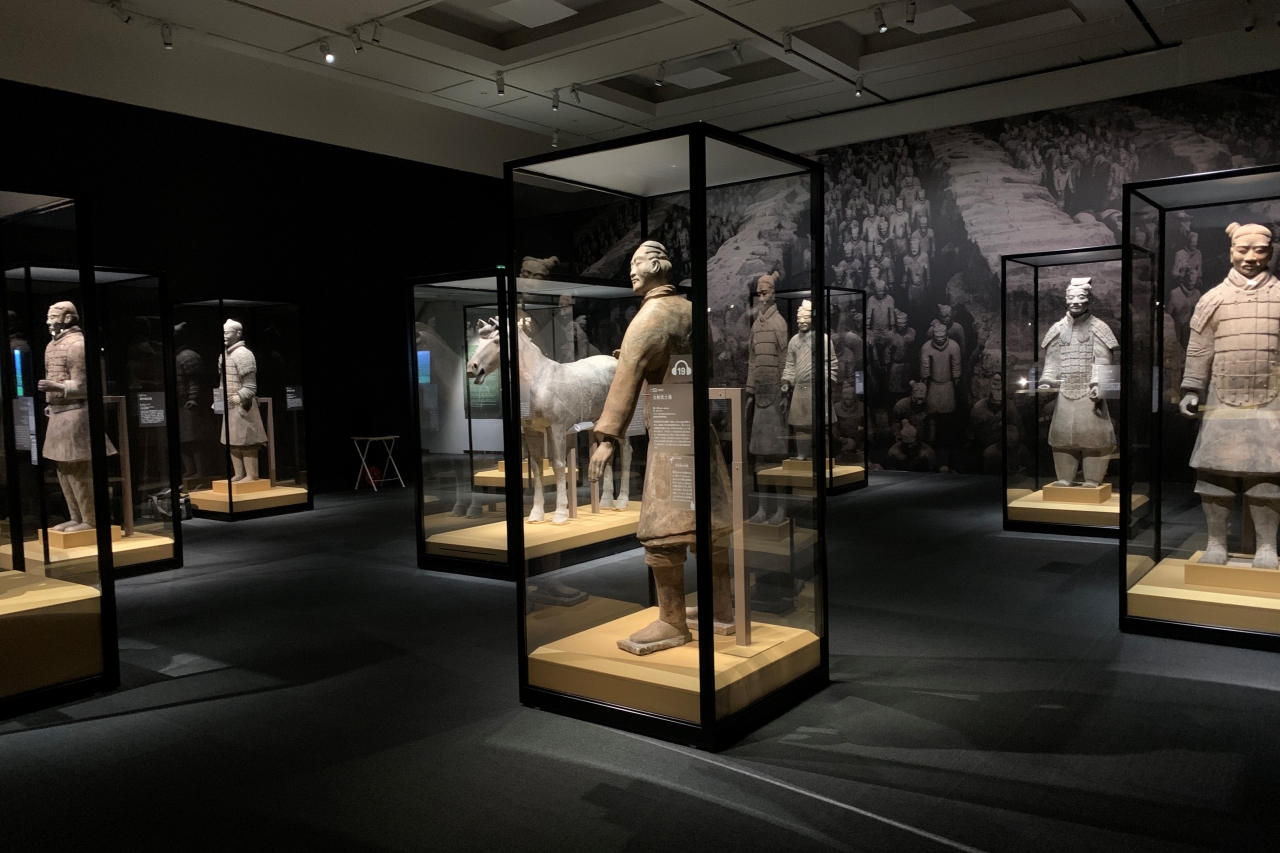 The highlight is the 36 terracotta warriors and horses, but especially the many terracotta warriors from the era of the first emperor in "Chapter 2: The Birth of the Unified Dynasty – The Era of the First Emperor" were very impressive with an average height of around 180cm.

Japan has held exhibitions on the theme of terracotta warriors and horses several times in the past. One of the precious "Shogun" that has not been exhibited in Japan for the first time is coming to Japan.

This is the "War Uniform General" . Although it has the name “shogun,'' it actually refers to a military officer or a high-ranking military officer who rode a tank and commanded a small unit of infantry and cavalry. The image height is 196 cm and tall.

Among the numerous terracotta warriors and horses lined up, it is easy to recognize at a glance because it has a uniquely shaped crown on its head called a katsukan. The pheasant is a wild bird of the pheasant family, and it is said that its tail feathers came to be used as the crown of warriors because it would fight back violently when attacked.

It is known that the terracotta warriors and horses were originally brightly colored, and if you look closely at the cheeks and ears on the right side, you can see traces of skin color overlaid on a white background, and you can feel the remnants of the past. The right hand is unnaturally rounded, but it seems that this represents the state of holding a sword.

It is interesting that not only the faces and clothes, but also the poses are diverse, such as those who shoot standing, and those who wait with a crossbow.

At 64cm in height, Kizayo , which is slightly smaller than life-size, is a faithful imitation of an official who raises horses and animals. Soldiers and horses are sometimes buried in combination, but kneeling figures like this one are buried in horse stables and rare birds and animals pits. It seems that it was placed in a place called this.

For the Zhou Dynasty, horses were bred and given the land of Qin. You can feel the depth of the Qin people's feelings for horses and animals, to take care of them in the afterlife.

On the same floor, there was also a figure of a chariot horse.

The terracotta army was born in place of human martyrdom (killing and burying according to the death of the grave owner), which was already abolished at that time. It is said to have been modeled.

Some of the terracotta warriors are posing with weapons, but if you look around, you won't find any stern expressions about going into battle. Knowing that the first emperor had begun building his own mausoleum before his death, I imagined that these expressions might have been instructions from the first emperor himself who wished for rest in the world after his death.

The interesting thing about the terracotta army is that such realistic, life-size figures can only be seen during the Qin Shi Huang era.

At the venue, one of the oldest examples of terracotta warriors from the Qin Dynasty, the Horse Warriors, and the Colored Infantry Soldiers , which was made in the Former Han dynasty, can also be admired. , Former Han has a simplified and standardized design. In other words, the terracotta warriors of the Qin Shi Huang era, which are almost life-size and have one-on-one models, are quite special. 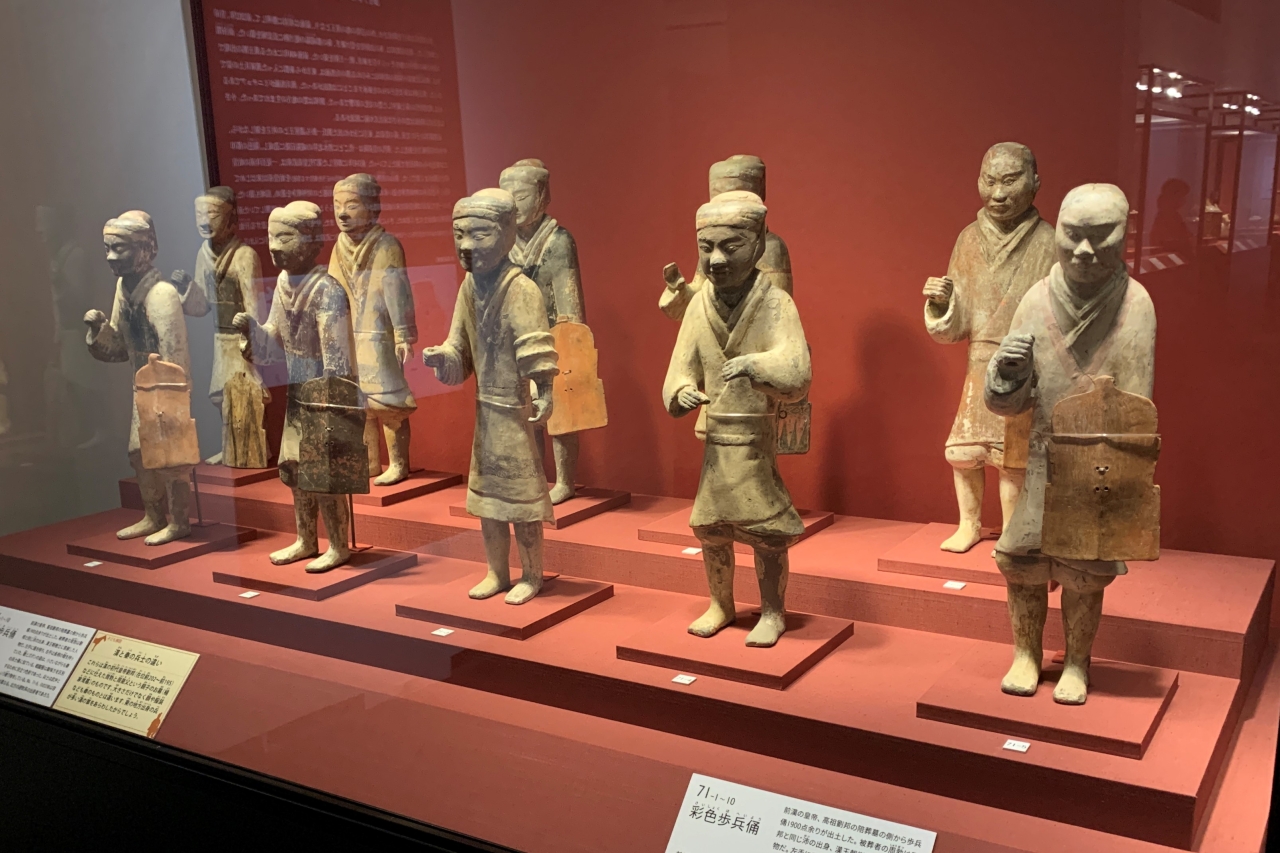 Kazuyuki Tsuruma, professor emeritus at Gakushuin University and the supervisor of this exhibition, explains why the Terracotta Warriors of the First Emperor were created.

■Since a decorative plaque depicting the Greek god of wine, Dionysus, was discovered in a Qin tomb during the Warring States period, it is possible that ancient Greek sculpture and art had an influence.

Confucius once criticized the figure of a human being, but since the First Emperor is known for burning books and digging Confucian scholars, he may have dared to create something that goes against Confucius' teachings.

In the vicinity of the Mausoleum of the First Emperor, which was equipped with sleeping halls and ritual facilities, not only soldiers but also civil officials, musicians, and acrobats have been found, although they are not on display.
In any case, these terracotta warriors and horses, which have a thorough realism, seem to reproduce the appearance of Qin at that time as it is, not only the enormous national power of Qin at that time, but also the extraordinary posthumous emperor's death. I could feel his expectations for the world and his pride as a ruler.

I mentioned earlier that this exhibition is collaborating with the popular manga "Kingdom", which is set in the Spring and Autumn Warring States period and depicts the path to the unification of China by Qin, but here is the collaboration.

"Kingdom" collaboration corner where a replica of the first-class cultural item "No. 2 Bronze Horse" is placed

The panel display surrounding the room where "No. 2 Bronze Horse" (reproduction) is placed allows us to compare the historical figures, places, weapons, and accessories that appear in the work with the exhibits in this exhibition. , to deepen your understanding of ancient China.

This "No. 2 Chariot Horse" was excavated from the Mausoleum of the First Emperor, and is half the size of the real thing. It retains the dignity of the first emperor's parade during his lifetime. It is praised as the pinnacle of ancient Chinese bronze technology due to the combination of elaborate parts.

A copper horse is depicted on the left panel.

In fact, this copper horse is very similar to the carriage that Masafumi was on in the first episode of "Kingdom" (although there is a difference between two horses and four horses). I am reminded of the fascination that reality is born in the world of the work from such detailed descriptions. 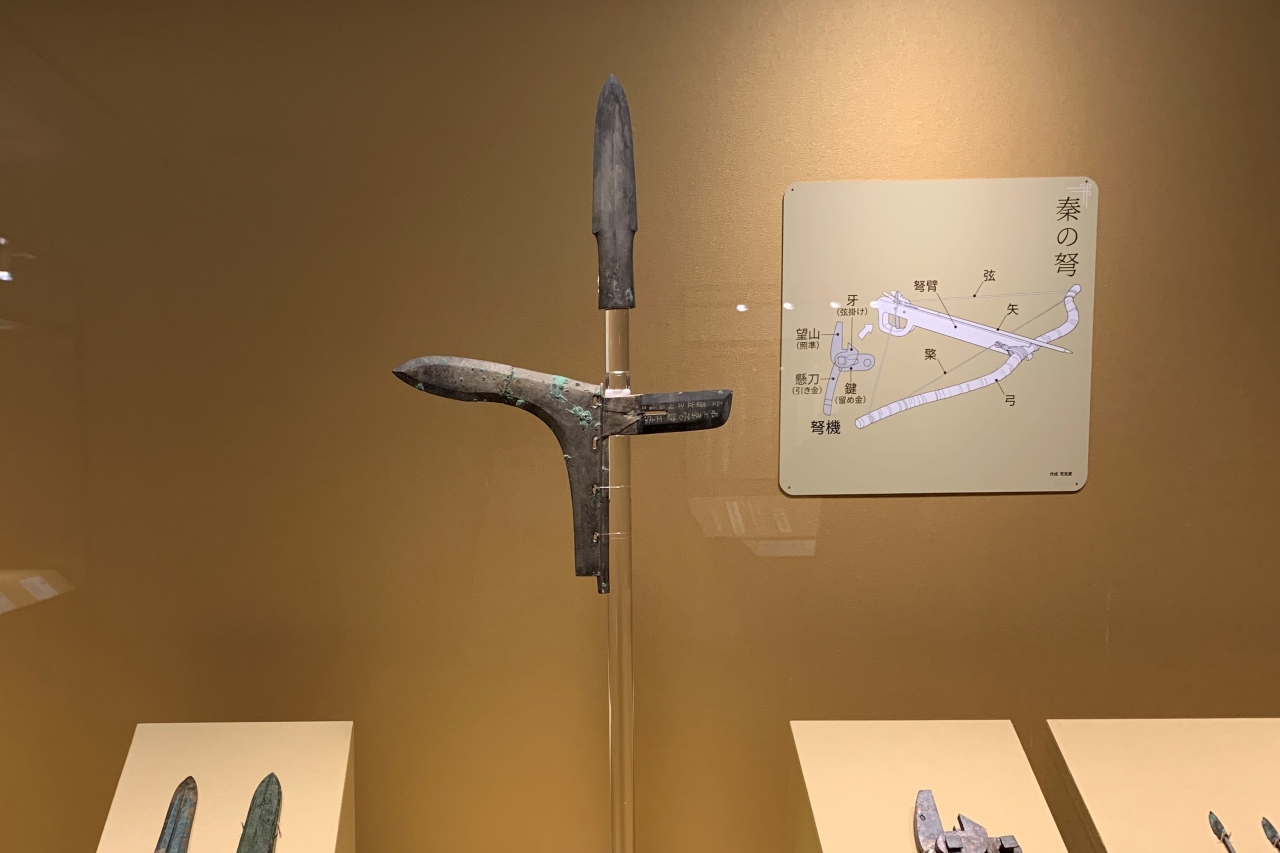 In addition, we also discovered the "Bronze Bell" , which is one of the most popular characters in the work, and is related to Lu Buwei, the first minister of Qin who stands in the way of Qin Shi Huang (later Shi Huang). "Keki" is a weapon with a spear attached to a weapon called a dagger. This item was discovered in the Terracotta Warriors' Mine, and it is engraved with the words "Three Years Old Lu Fu Wei", indicating that Lu Fu Wei was in charge of manufacturing this weapon.

In this way, exhibits linked to the world of "Kingdom" will appear here and there in this exhibition, so if you are a fan, please check every corner of the venue. 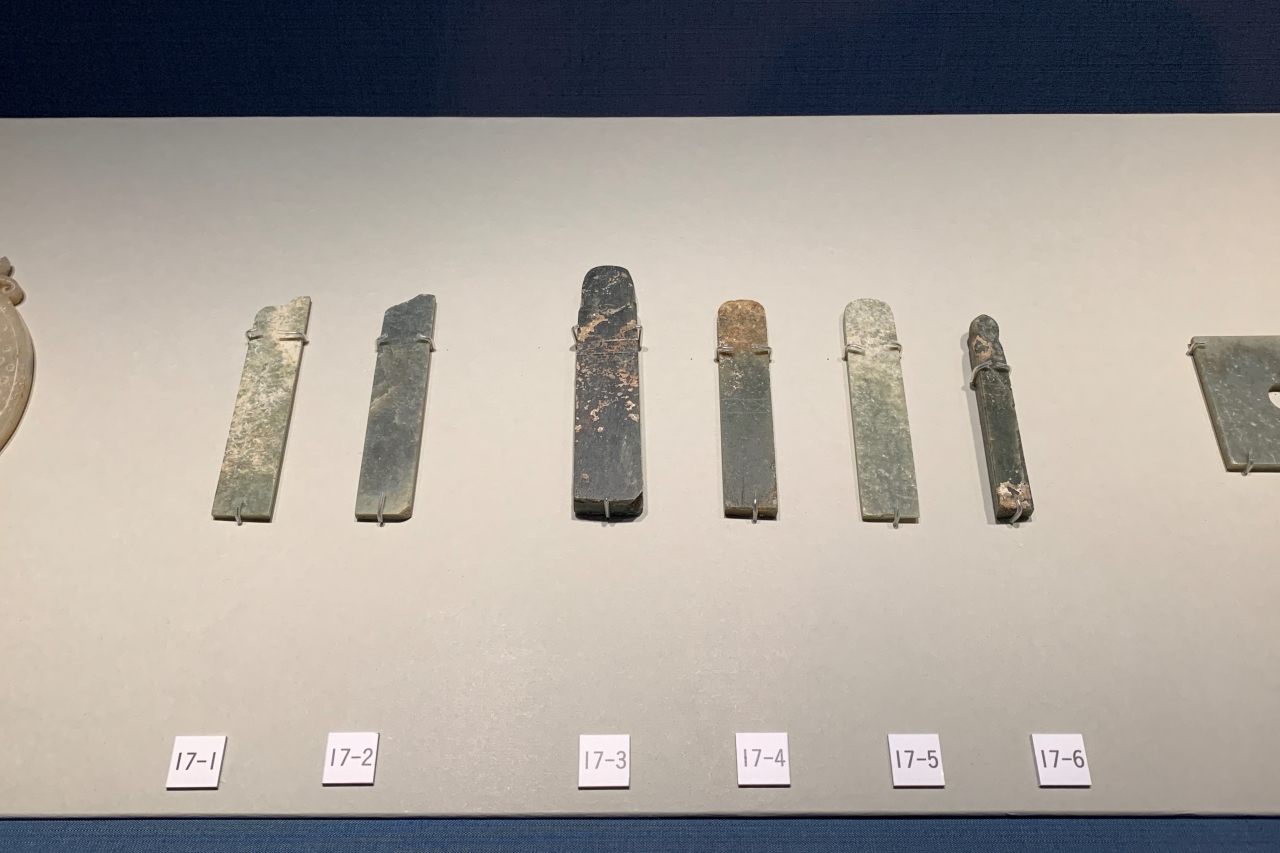 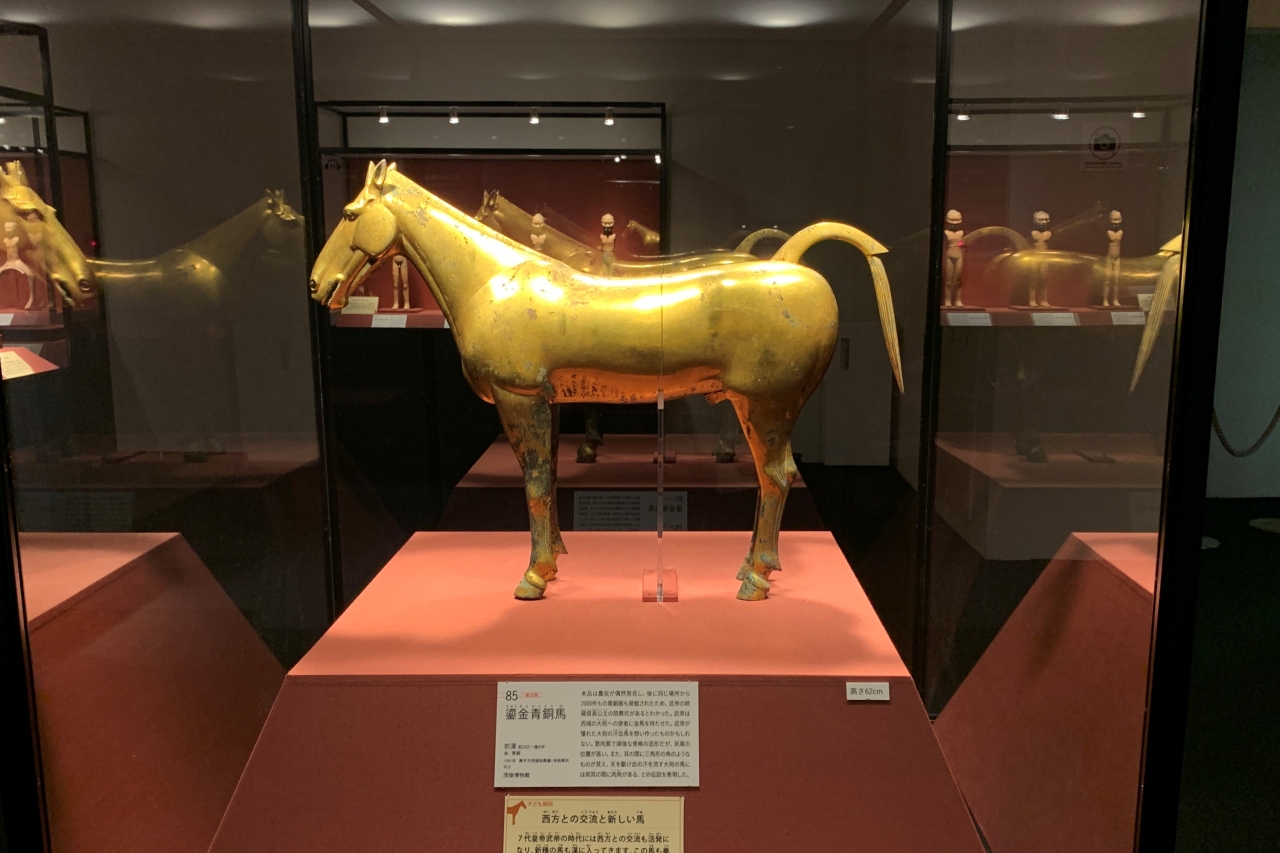 In addition, there are carefully selected masterpieces such as bronze ware and jade. Among them, the treasure “Ryukin Bronze Horse” , which was made by Emperor Wu of the Former Han Dynasty and was exhibited for the first time in Japan, had a strong presence. It is a gold-plated statue of a horse, and its model is said to be Hanchiuma, a famous horse that was said to run a thousand miles in one day, and was entrusted with the admiration of Emperor Wu, who had never seen the Hanchima. It is considered

In addition to ancient administrative documents called “Liyeqinjian” and gold seals, there are valuable cultural relics of the highest grade, as well as coins, jars, jars, incense burners, boards (tools for washing one’s hands), and vases (for pouring sake and water). A wide range of items that remind us of the lives of people who lived in ancient China, such as tableware, dings (tools for boiling meat and fish), were introduced, making it a perfect introduction to ancient China. .

There was also a rustic animal motif cultural relic here and there, and it was healed. 《Colored Ceramic Sheep》Han, Ceramic, Yulin City Public Cultural Service Center

The exhibition "Terracotta Warriors and Ancient China – Heritage of the Qin and Han Civilizations -" where you can feel the romance of ancient China will be held until February 5, 2023.

*The content of the article is as of the interview date (2022/11/21). For the latest information, please check the official website of the exhibition. 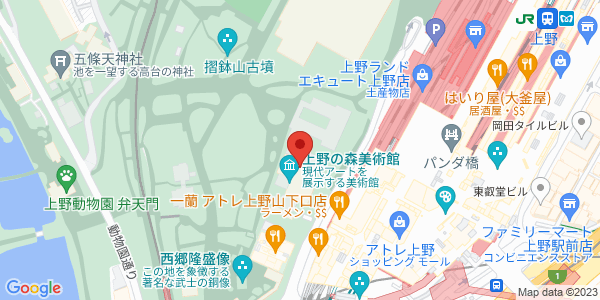 [Venue Report] Over 250 “Poison” Exhibits! Special exhibition "Poison" opens at the National Museum of Nature and Science (until February 19, 2023)

[Venue report] The special exhibition “National Treasure Tokyo National Museum” finally opens! 89 national treasures are open to the public, and there is also a "National Treasure Sword Room" where 19 swords such as Mikazuki Munechika are available