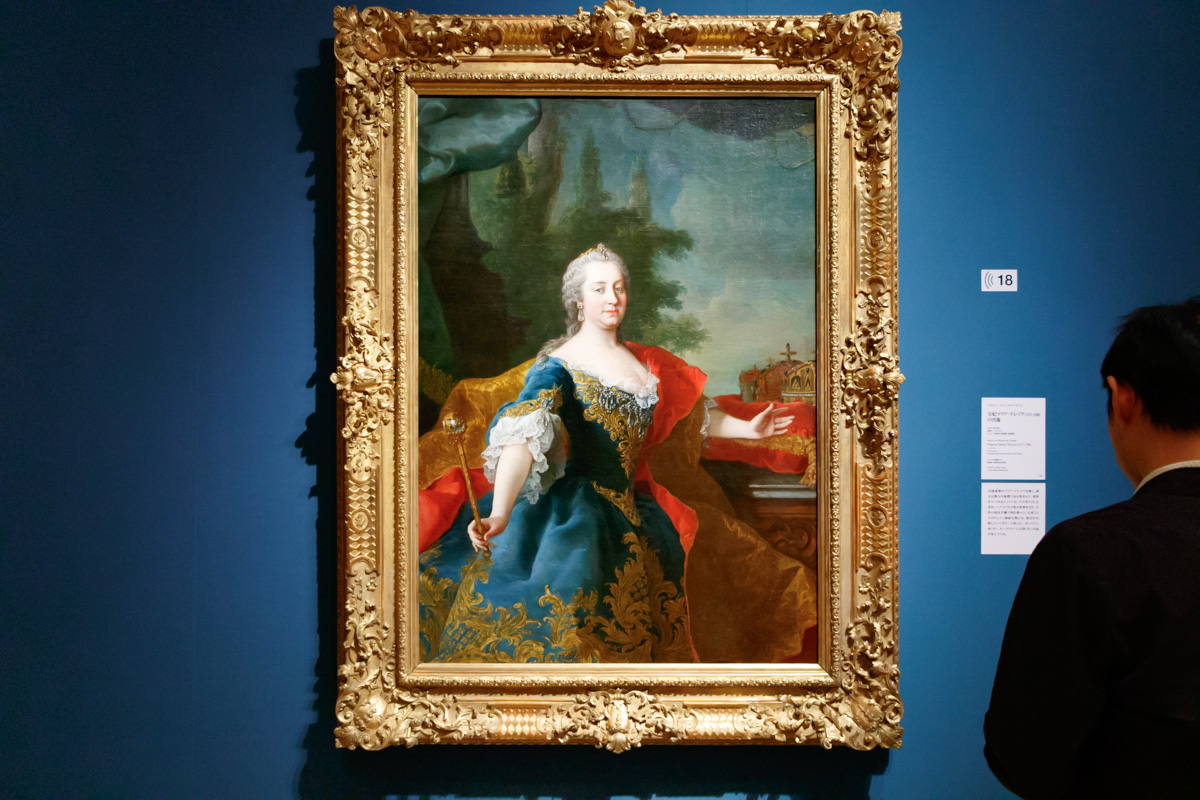 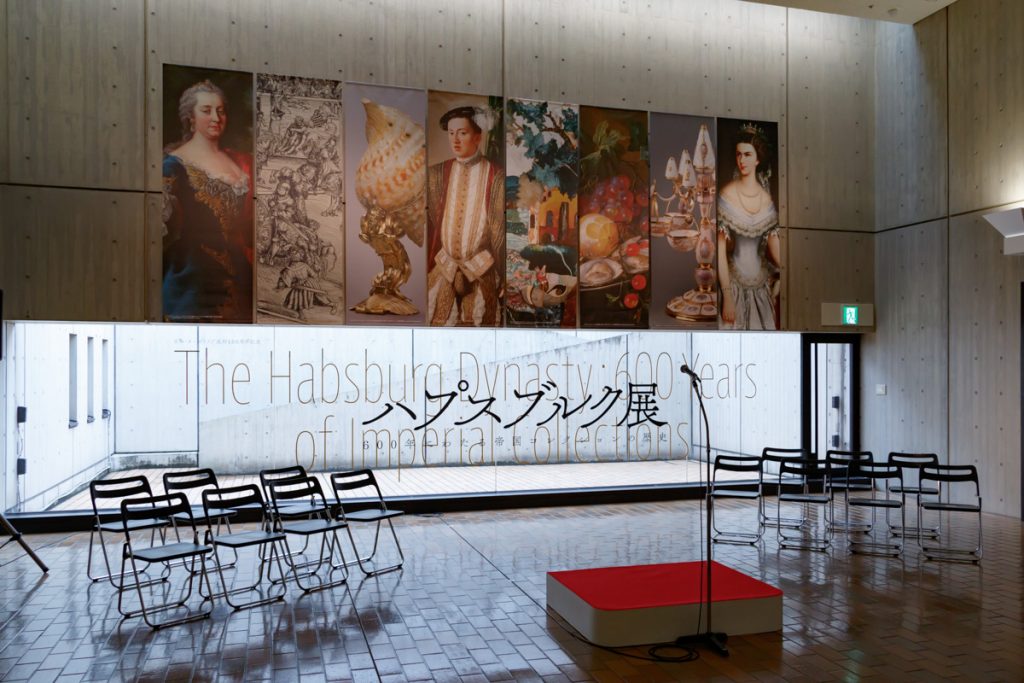 From October 19th (Sat), 2019, at the National Museum of Western Art, Tokyo Ueno,
The 150th anniversary of the friendship between Japan and Austria, “Hapsburg Exhibition: 600 Years of Imperial Collection History” is held. (Until January 26, 2020)
The other day, prior to the event, a press preview was held.

About the Habsburg family

The Hapsburg family emerged as an Australian in the upper reaches of the Rhine, and expanded to Austria at the end of the 13th century.
One of Europe's most prestigious families, who ruled a wide range of empires over hundreds of years until the end of World War I (1918) .
Specifically, the Holy Roman Empire monopolized after the 15th century, and when the Habsburgs split into Austrian and Spanish in the 16th and 17th centuries, the Spanish expanded to South America, Africa and Asia. It became an empire without the sun setting.
After the dismantling of the Holy Roman Empire, triggered by the Napoleonic Wars, he later ruled the Austrian Empire.
During this long reign, he possessed treasures such as the world's finest arts, decorations, crafts, weapons and historical memorabilia, utilizing his wealth and personal connections.
The "Hapsburg Exhibition" is an exhibition that introduces about 100 items, including paintings, weapons, crafts, tapestry, and prints, in cooperation with the Vienna Art History Museum, which was built by a family and opened in 1891.

Composition of the Hapsburg exhibition

The composition of the Hapsburg exhibition is as follows.

Chapter 1
The beginning of the Habsburg family collection

In Chapter 1, we will introduce 12 collections of paintings, armor, and crafts from the time when full-scale collection of the Hapsburg family art from the late XV to the 16th century began.
The attention of the Habsburgs in this period was Maximilian I (1459-1519).
Famous for his skillful marriage and expansion of his territory, Maximilian himself married Marie's successor Marie, Flemish Burgundy, and created an opportunity to enrich the Habsburg family collection.

Chapter 2 focuses on Holy Roman Empire Rudolf II (1853-1612), a famous collector, and introduces 30 items including tapestry, armor, paintings, and sculptures.
Rudolf had no sense of governance, but the depth of art and academic knowledge was extraordinary, and when he moved the court from Vienna to Prague in 1583, paintings, weapons, small sculptures and crafts , Owned a diverse collection of natural objects specimens and watches.

Chapter 3 1 The Spanish Habsburgs and Leopold I

In Chapter 3, section 1, we will introduce seven collections, including portraits that became a tool of the era when the Habsburgs were split into two systems of Austrian and Spanish and kept in touch.
The center of this era is King Philip IV of Spain (1602-1644).
He was young and thriving, passionate about art and culture, hired young Velázquez as a court painter and treated him.

Chapter 3-2 introduces six paintings including a collection of Ferdinand Karl, one of the Grand Duchy of Austria and an important collector, belonging to the Habsburg family.

Chapter 3-3 introduces 24 paintings, including the collection of Leopold Wilhelm (1614–1662), one of the most important collectors of the Habsburg family.

Chapter 4 The Habsburgs and Imperial Gallery in the 18th Century

Chapter 4 introduces the people of the Habsburgs who survived the turbulent 18th century in a collection of 15 items, mainly portraits.
The attention of this era was Maria Theresia (1717-1780).
She is the “emtress” who showed her natural wisdom, political skills, and led the people through national difficulties.
Another note is Marie Antoinette (1755-1793), the youngest daughter of Maria Theresia. Married to the later French king Louis XVI, but the queen of Guillotine disappeared in the French Revolution.
Chapter 4 revolves around these people.

The New Holy Roman Empire was dismantled after the Napoleonic Wars, and the Austrian Empire was born in 1804. (From 1867, Austria = Hungary Double Empire)
However, the Austrian Empire collapsed due to the defeat of World War I. At the same time, the Habsburgs will end.
Chapter 5 introduces six works related to Franz Josef I (1830-1916), who decorated the endless beauty as the actual last emperor of the Habsburg family.

Margarita Teresa's latest work by Velázquez depicting the age of 8.
Wearing a gorgeous silk blue dress and looking at you with straight eyes, this figure is so calm that you can't imagine it was eight years old.
Velázquez also describes Margarita Teresa, 3 and 5 years old. 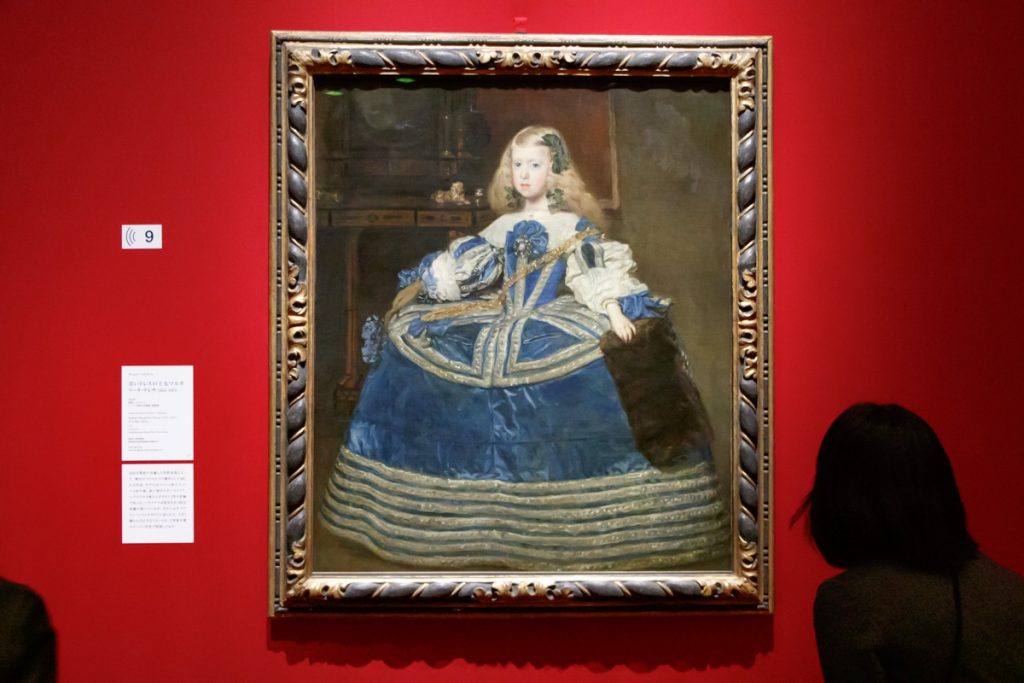 A portrait of Theresia, drawn by Martin van Metens, a child who was heavily used in the early reign of Maria Theresia.
From the work, you can feel the confident expression of “The Emperor” Maria Theresia who led the people and the openness of 16 children. 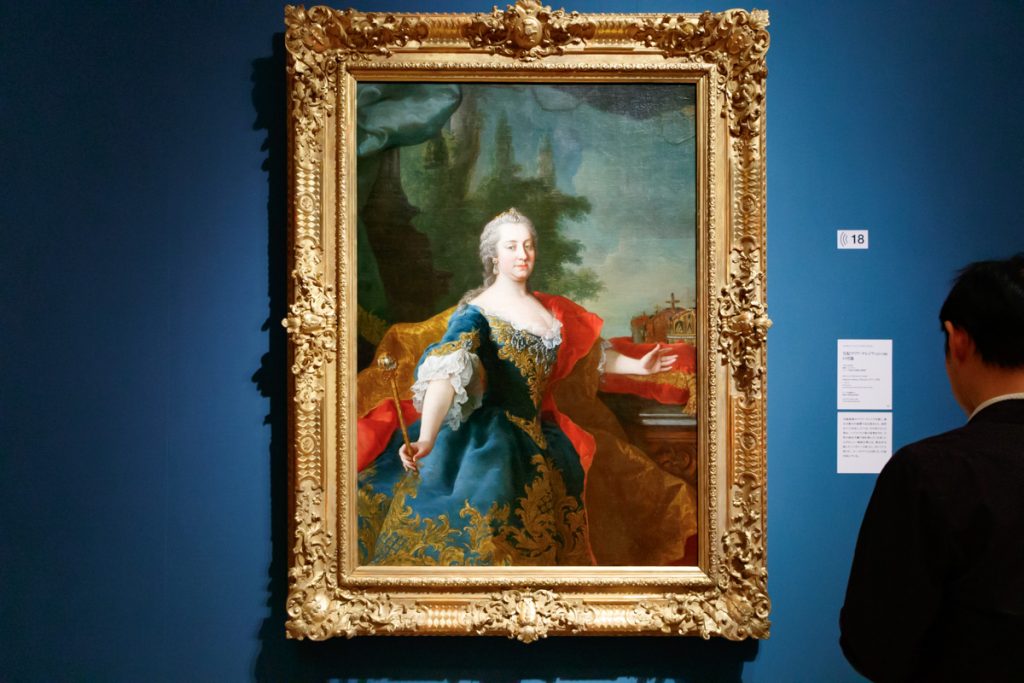 A work by Marie-Louise Elisabeth Vigere-LeBlanc, who was used by Marie Antoinette as a court painter.
The work depicts a young Marie Antoinette who was married to France in a political marriage.
Marie Antoinette wearing a gorgeous satin dress and a pink rose flower is shining, and from this work you can't even imagine a tragic death in the French Revolution. 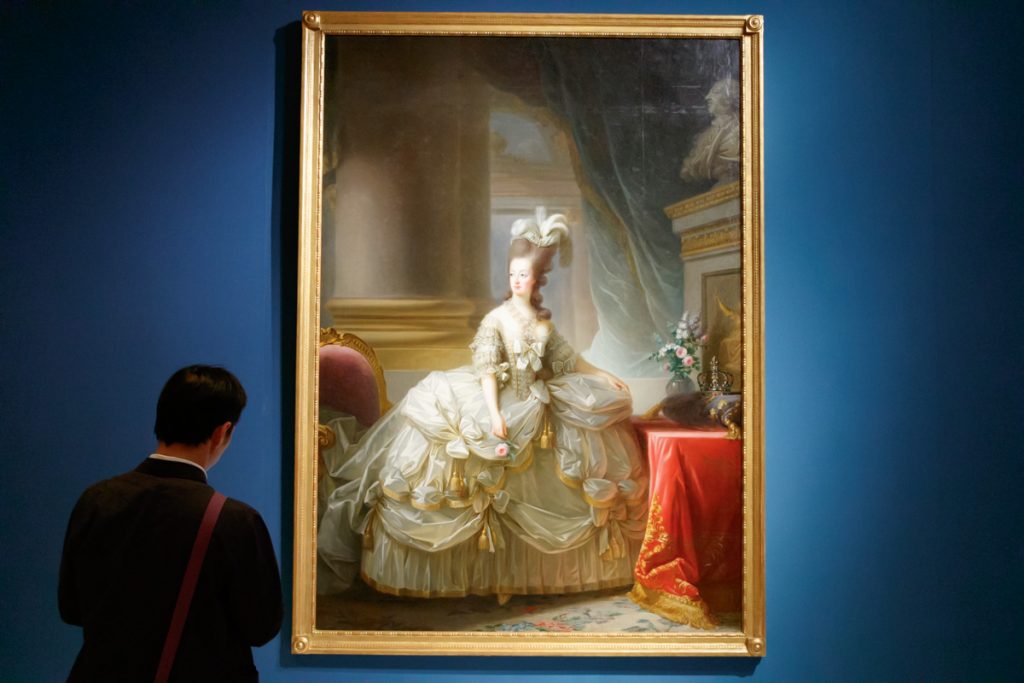 Portrait of Josef Horacek, depicting Elizat (nicknamed Sissi), the wife of the Austrian Emperor, who was dyed by the Hapsburg family's last imperial emperor Franz Josef I. Because of her death, she seems to be sucked into her aura who was later deified.
The story of Elizabeth wearing a corset and imposing dietary restrictions on a daily basis to maintain the system is famous. 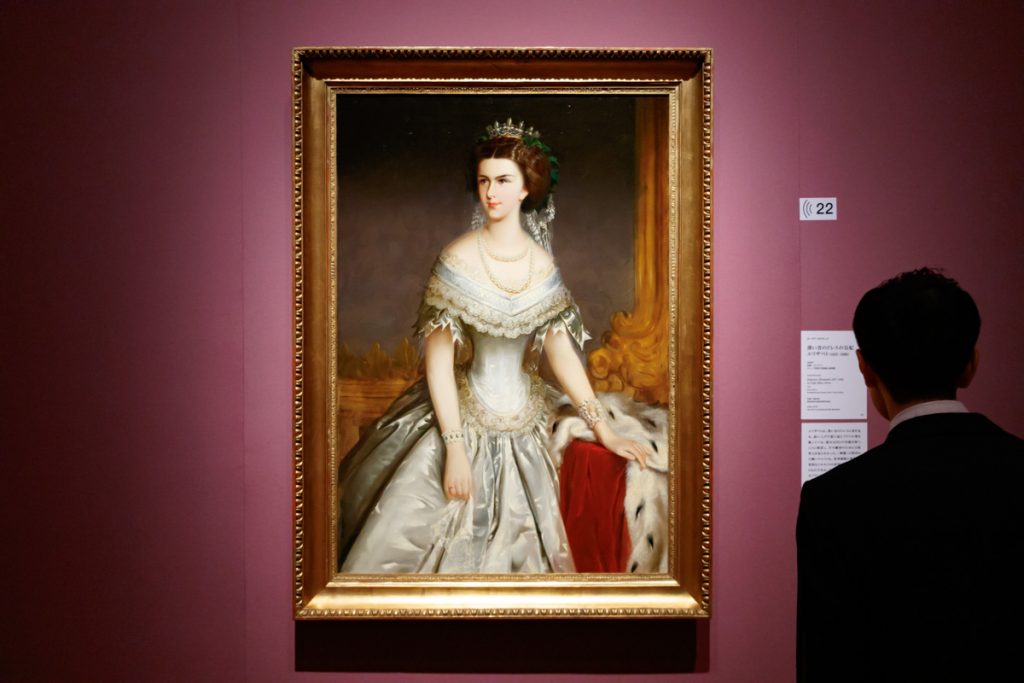 Rebeka and Eliezer at the well end

This is a masterpiece of Ottavio Vannini, depicting a scene related to the marriage of Isaac and Rebekah in the Old Testament. In the middle of the painting, Rebeka is pouring water on the reeds of his follower Eliezer and the camel behind it And the women who hold the meeting at the well end are also drawn lively.

A work depicting the infant Christ standing on the lap of the Virgin Mary.
The expression of Christ's limbs that stand up in balance is delicately depicted. And the expression of Virgin Mary, who supports Christ, is calm and still seems to spill. 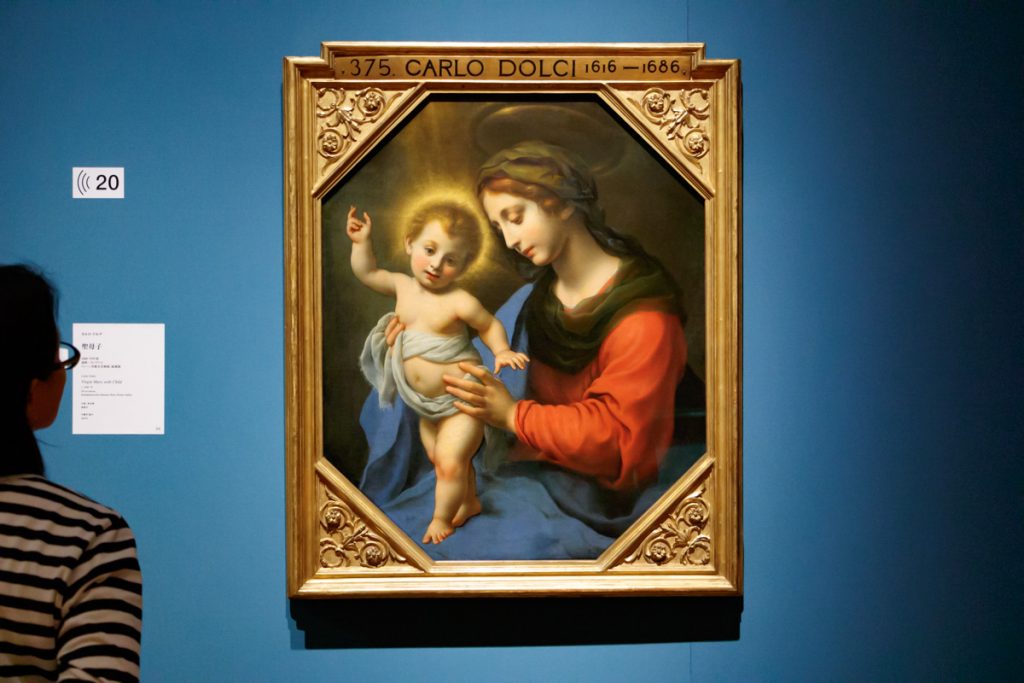 This painting was drawn by Jan Thomas, one of the most important painters during the celebration of the Imperial Palace of the Holy Roman Emperor Leopold I (1640-1705) and Margarita Teresa (1651-1673).
At the banquet, people dressed in costumes for the costume party enjoy the party with the emperor and his wife sitting in the back left.
If you listen carefully, you will hear the cheers of the banquet and you will feel like you are participating in the party. 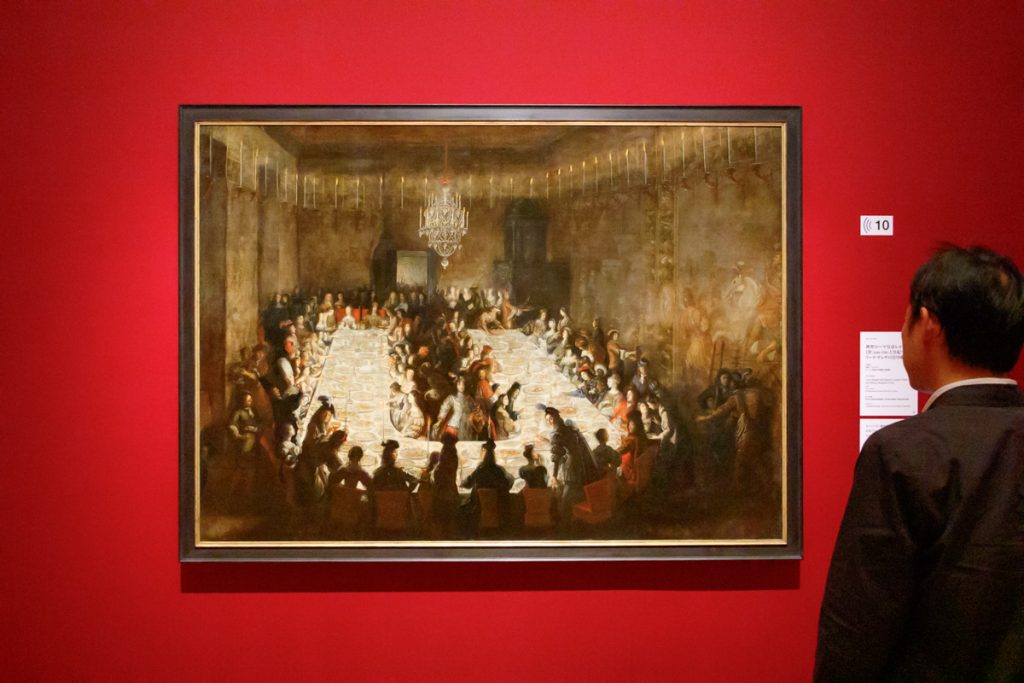 Many people attended the venue, not to miss one of the 100 collections of the Hapsburg family. Some of them spent several tens of minutes on the work. There were also women who were eager to watch without being able to leave, and women who wore costumes reminiscent of Marie Antoinette.

All the works at the venue are gorgeous for the royal collection.
In addition to the works introduced, there are countless exhibits such as paintings, weapons, crafts, tapestry and prints. 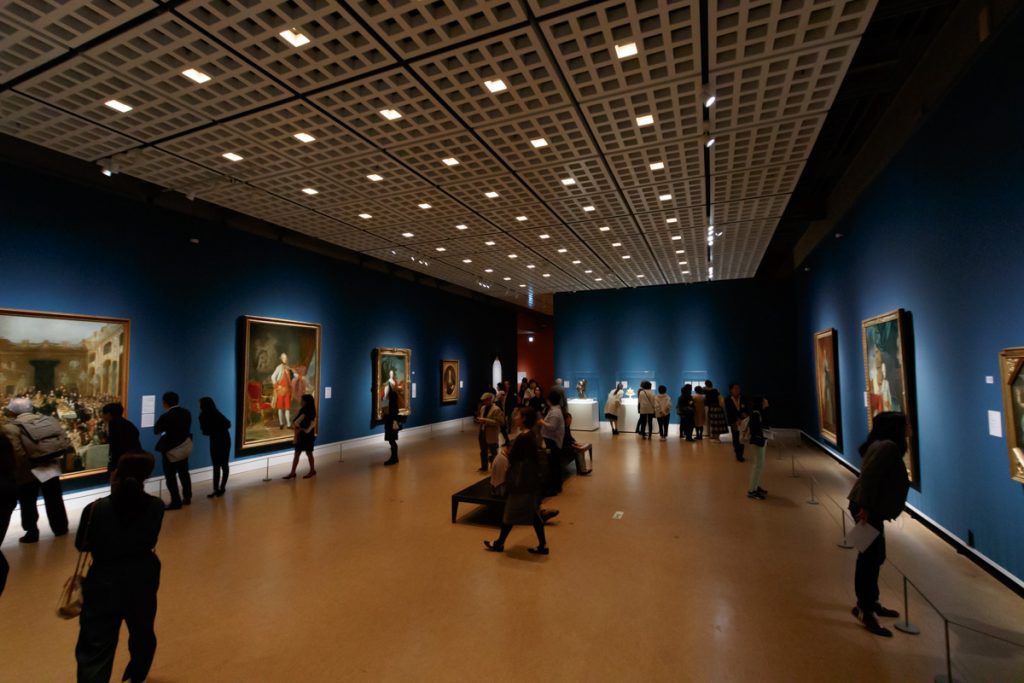 I was watching the work so that everyone could eat it. 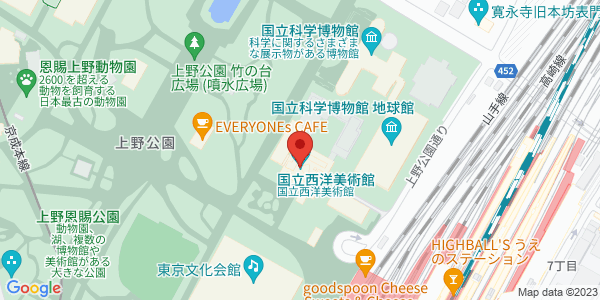