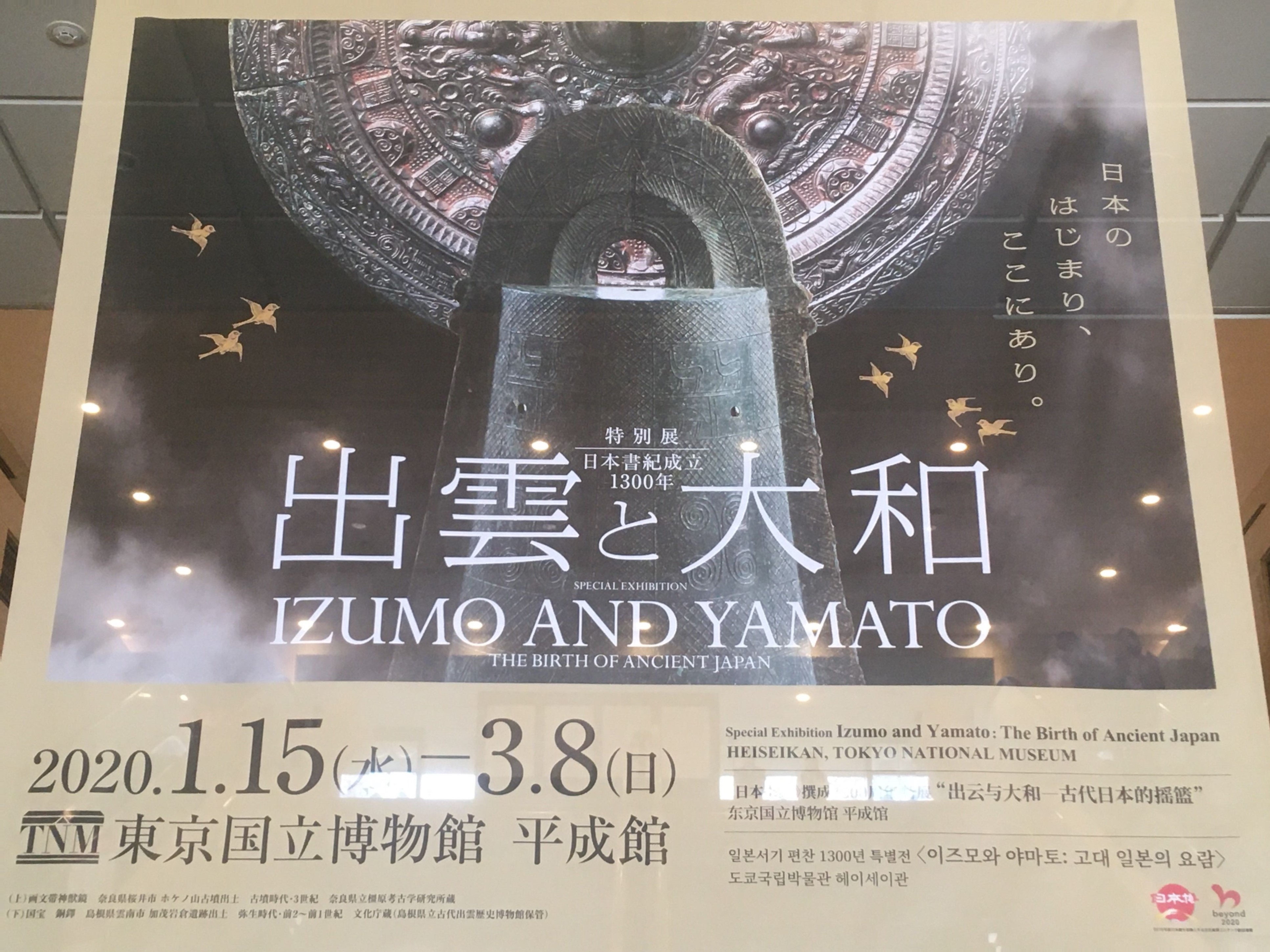 This year of the Olympic Year, Reiwa 2 (2020) is also a memorable year of 1300 since the Nippon Shoki was compiled.
To commemorate this, the Tokyo National Museum in Ueno, Heiseikan, will hold a special exhibition "Izumo to Yamato" from Wednesday, January 15th to the establishment of the Nihon Shoki 1300 .
(* First-half exhibition: January 15 (Wed)-February 9 (Sun) Second-half exhibition: February 11 (Tuesday / holiday)-March 8 (Sun))
Prior to the exhibition, there was a press preview the other day.

■ What is the special exhibition "Izumo and Yamato"?

Japan's oldest Masafumi and Nihonshoki, from Kamiyo to Emperor Joshi 11 (697),
The chief of the Tonin (Toneri Shinnou, 676-735) is the main editor,
It is a history book consisting of 30 volumes that was played by Emperor Gensho Tenno in Yoro 4 years (720).
In the country myth at the beginning of the Nippon Shoki, Okuninushi, enshrined at Izumo Taisha Shrine,
The existence of the world "spirit" beyond human ability, the emperor in the land of Yamato is the existence of the visible real world "ken".
This special exhibition “Izumo and Yamato” is jointly held by Shimane and Nara prefectures, which symbolize the “Yu” and “Ken” in ancient times, and the Tokyo National Museum.
In the special exhibition, masterpieces of Izumo and Yamato gather in one hall to explore the formation and characteristics of ancient Japan.
* Enshrined (= the spirit is settled in a certain place)

There are four highlights of the special exhibition "Izumo and Yamato".

① You can see the Izumo Taisha Shrine in Tokyo

From ancient times, you can see works that tell the history of Izumo Taisha, such as the treasures such as hand boxes and armor transmitted to Izumo Taisha, huge pillars excavated from the precincts, paintings decorating the shrine.
In particular, the two pillars, "Shinomi Hashira" and "Uzu Pillar" (Uzuba Shira), allegedly supporting the Izumo Taisha main shrine, which is 48 meters long, are unveiled for the first time in history!
This is a valuable document that supports the existence of the main shrine of Izumo Taisha.

③ Exhibition of the most excavated triangular green beast mirror

The oldest stone Buddha, which has been quietly protected in the land of Yamato for 1300 years, will be unveiled outside the temple for the first time.
Pay attention to the details, such as the slight residual coloring and the sharp dugout.

Featured exhibits are introduced in chapters.

It is a pillar excavated from 1.3 meters underground in the grounds of Izumo Taisha Shrine in 2000 (2000).
If you look closely, there are traces of gouging on the pillars.
This is the trace of a rope and the trace of a hatchet whose surface has been adjusted when logging and transporting it from the site to the exhibition room.
Even in the local area, it is not easy to display side by side,
It is a valuable opportunity.
I looked at both pillars from all angles.
I can't actually touch my hands, but I felt that the feeling was different depending on where I touched, such as being rough or glossy. 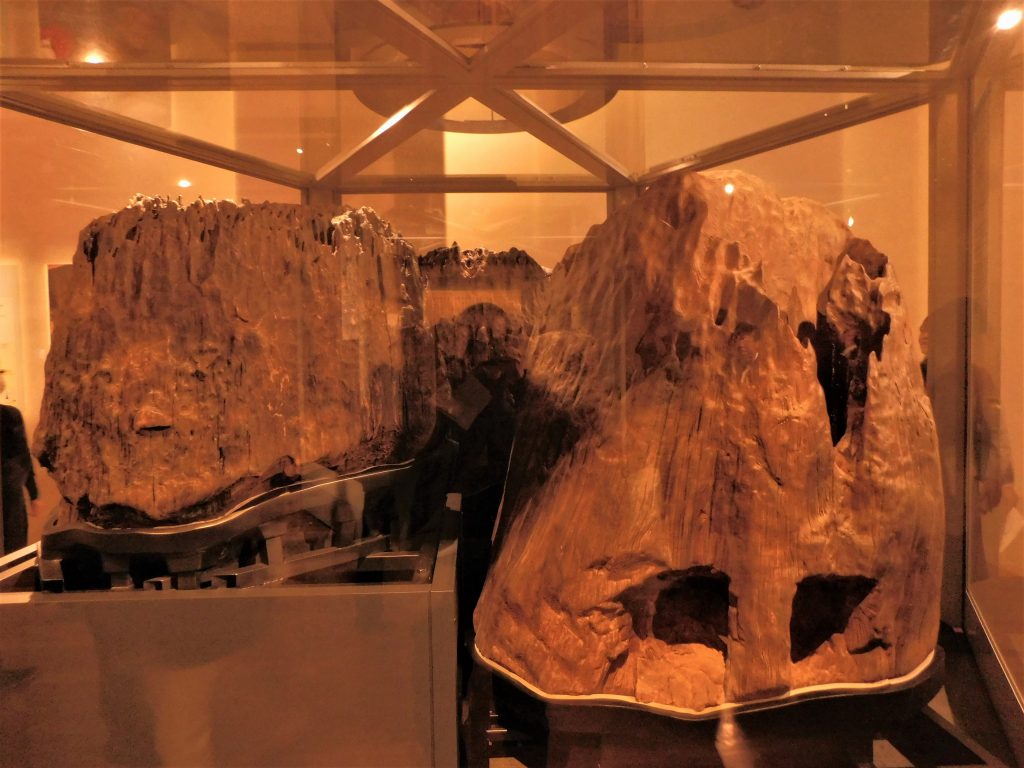 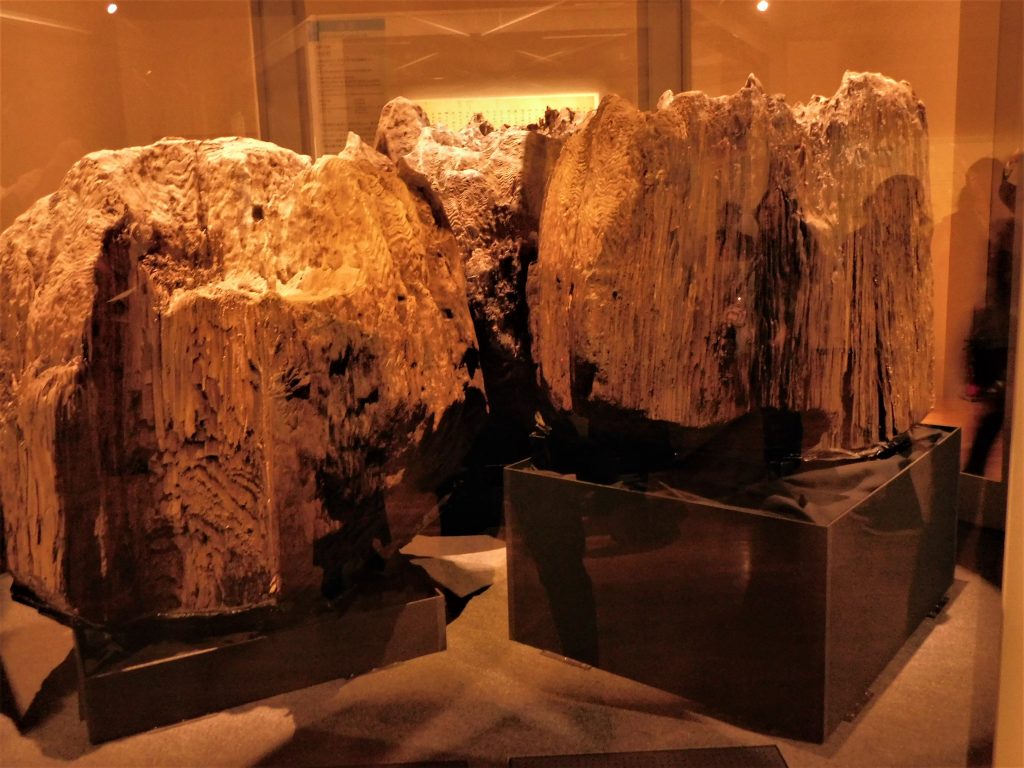 Two pillars are installed to reproduce the actual situation inside the premise of Izumo Taisha.
Stand between the pillars, spread your hands widely and look up to see the real feeling. 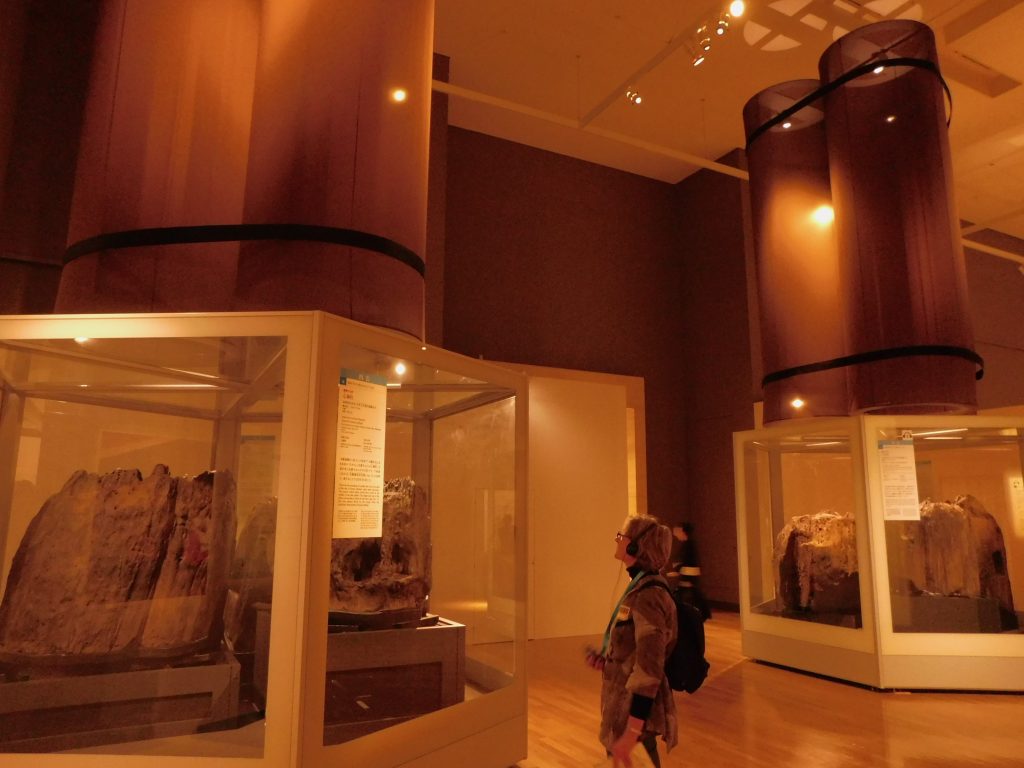 It is a copper sword excavated in 1984 in 1984.
All the bronze swords on display appear to be of the same size and standardized, but if you look closely, you will see a ✖ engraved on the stem.
This is considered to be a trace of the process from production to burial at once, a feature not found in other copper swords distributed around San-in.
It makes me feel that the Japanese delicate manufacturing technology has been around since ancient times. 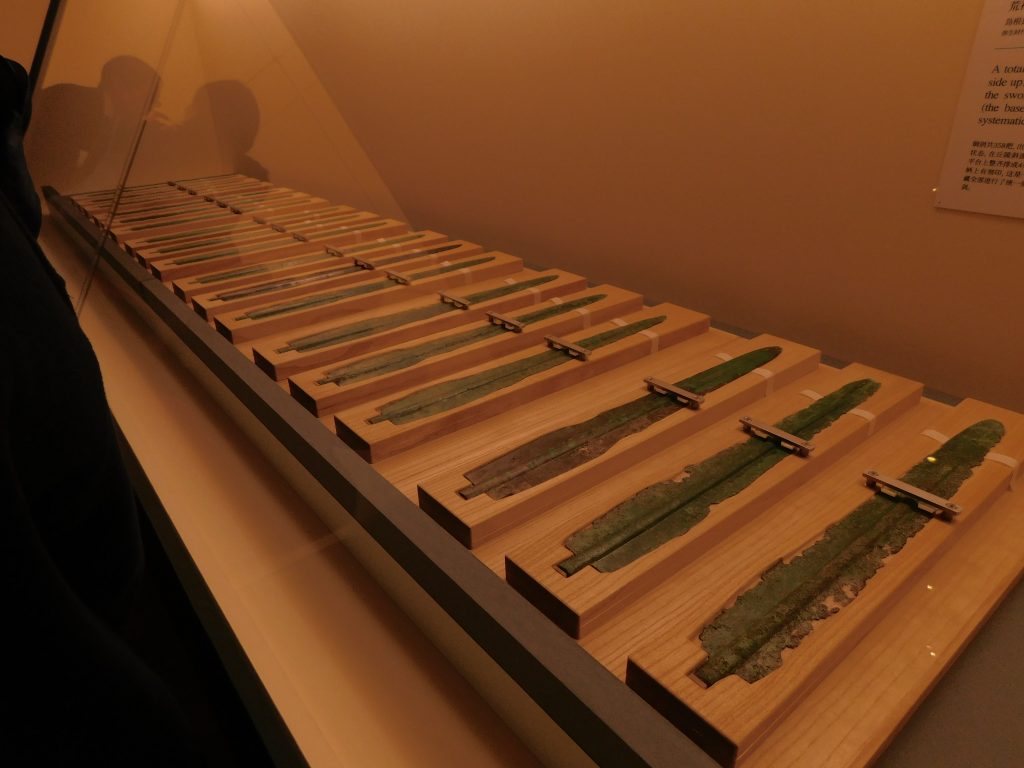 It is 16 bronze splinters from Aragami Valley which boasts the largest number in the country excavated all at once.
If you compare them one by one, you will find something.
A rattled edge, a relatively clean edge,
Rusted and faded, black-brown and shiny
And the unique copper spears are lined up. 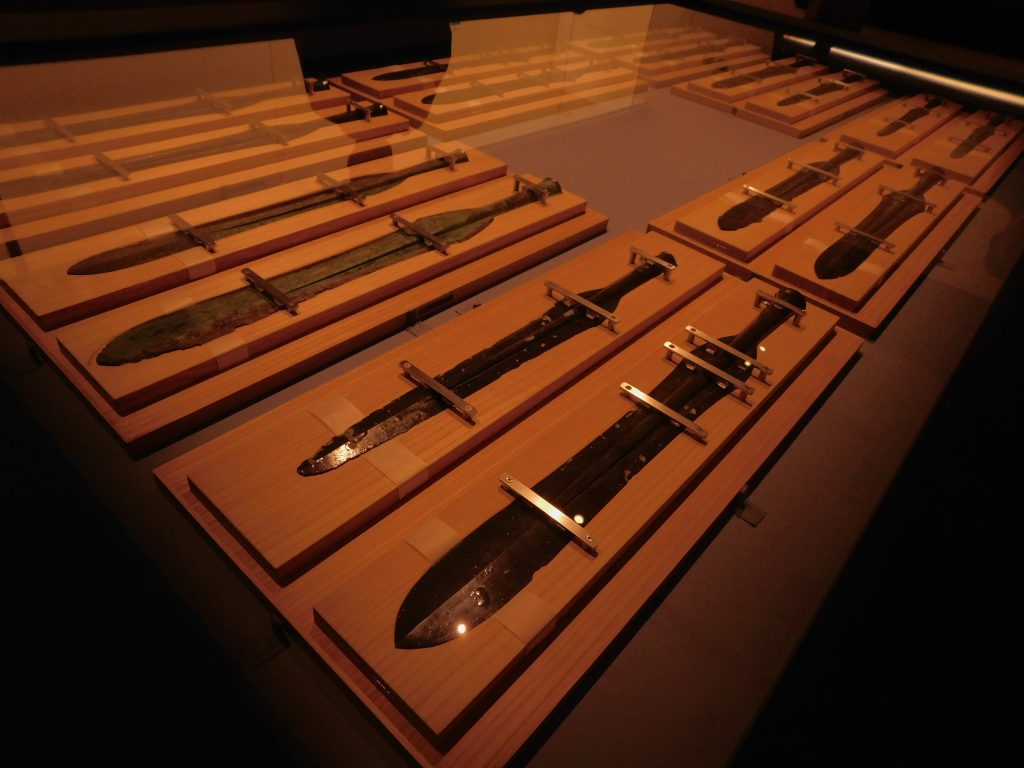 It is a bronze dot excavated from Aragami Valley.
There are various types, but they are almost the same size.
There are many places where the end of the bronze is scratched, and there are traces of considerable use.
What kind of thought did people at that time stare at at this bronze dot? 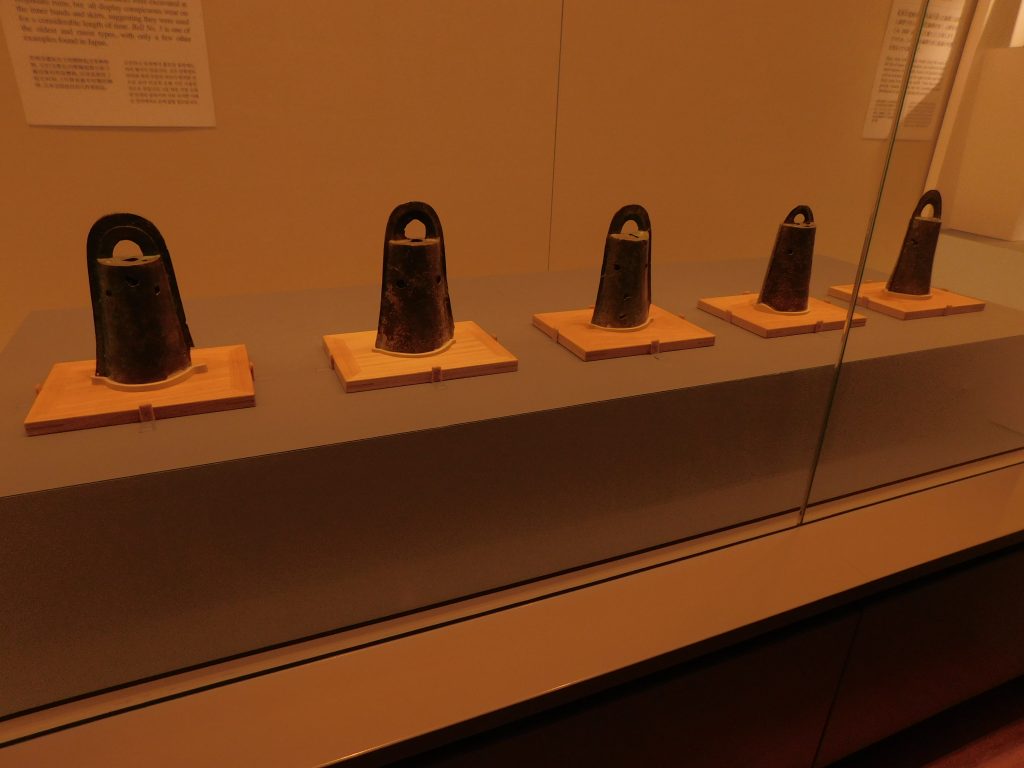 It is a treasure sword transmitted to Ishigami Jingu Shrine, and a treasure similar to the Shinto shrine.
Formerly, it was subdued in the main shrine.
A very rare type that has branches growing sideways is characteristic,
In the center is an inscription of 61 characters.
On the surface, a statement that if you have this sword you will reject hundreds of things,
On the back, there is a statement that the royal family of Baekje on the Korean Peninsula was dedicated to the King of Wa.
It is a rare and rare opportunity to see this seven-armed sword, also described in the Nihon Shoki, as a seven-sheath sword! 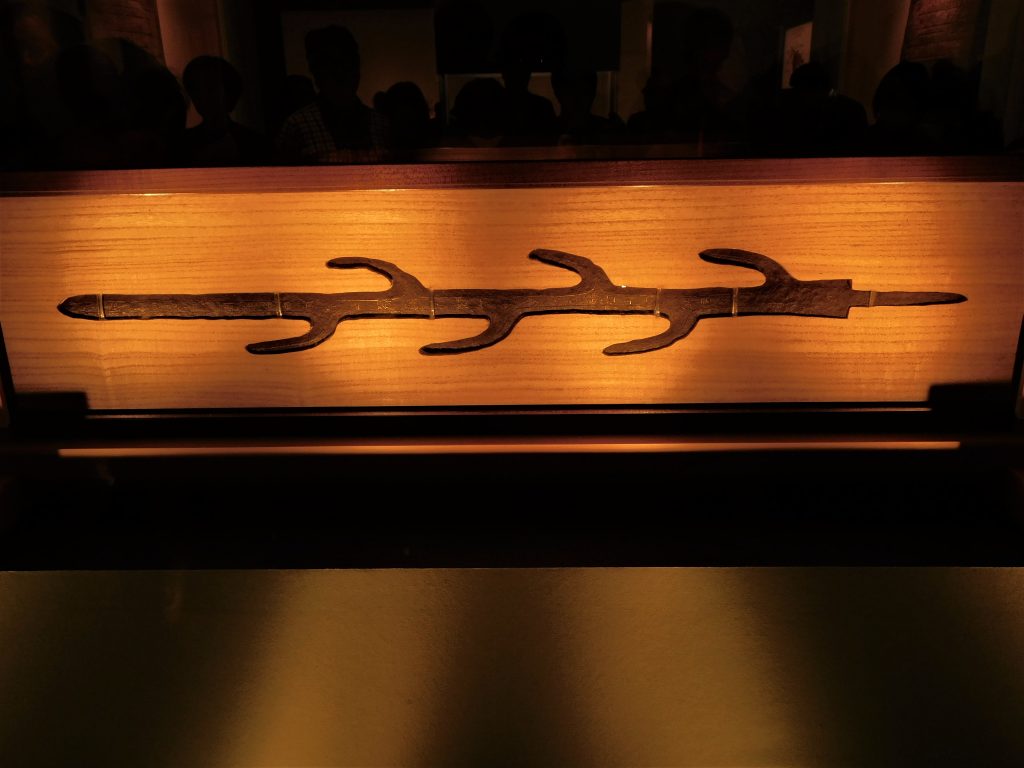 The "Bungou Belt Mirror" displayed in the center is a copper mirror excavated from the Hokenoyama Burial Mound in Nara Prefecture.
On the outside, the car that follows the sun ring, the beast that pulls the car, the kisesen, etc. are embossed.
It is very small but has a strong presence.

The “Triangle Enshrine Beast Mirror” displayed on the left and right is a copper mirror excavated from the Kobara Shrine Tumulus in Kamo-cho, Yunnan City, Shimane Prefecture.
On the outside, patterns of Shinsen and spirit beasts are engraved.
The appearance of the 33 faces is spectacular. 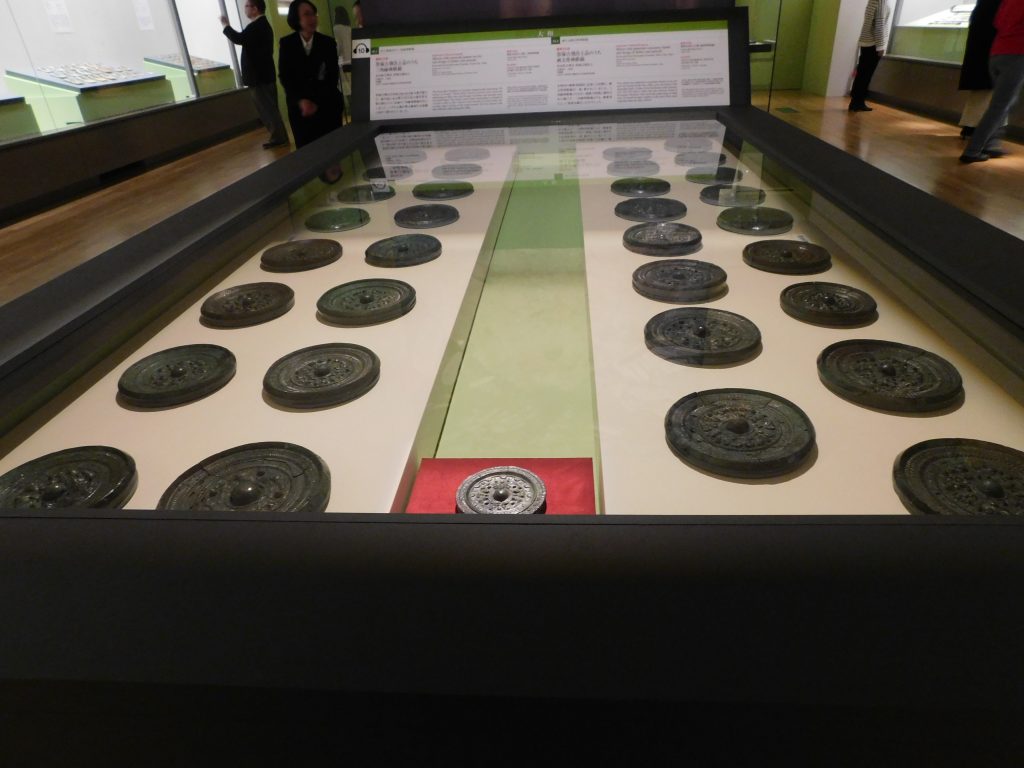 Chapter 4 Buddha and Government (the festival)

Two 11-faced Kannon Bodhisattva statues in the center of the photo.
At that time, we prayed for the great power of Kannon and wished for the prosperity of the country and the safe living of the people.
It is strange to stand in front of the statue of the Kannon Bodhisattva, because you will feel as if you are protected by something invisible.

Shitenno is a symbol of national politics.
Both of the two Buddha statues are impressive with thick eyebrows and large nose.
At first, I was overwhelmed by the intimidation of the Buddha statue, but after staring at it for a while, I realized that there was a person who did not want to leave the place forever. 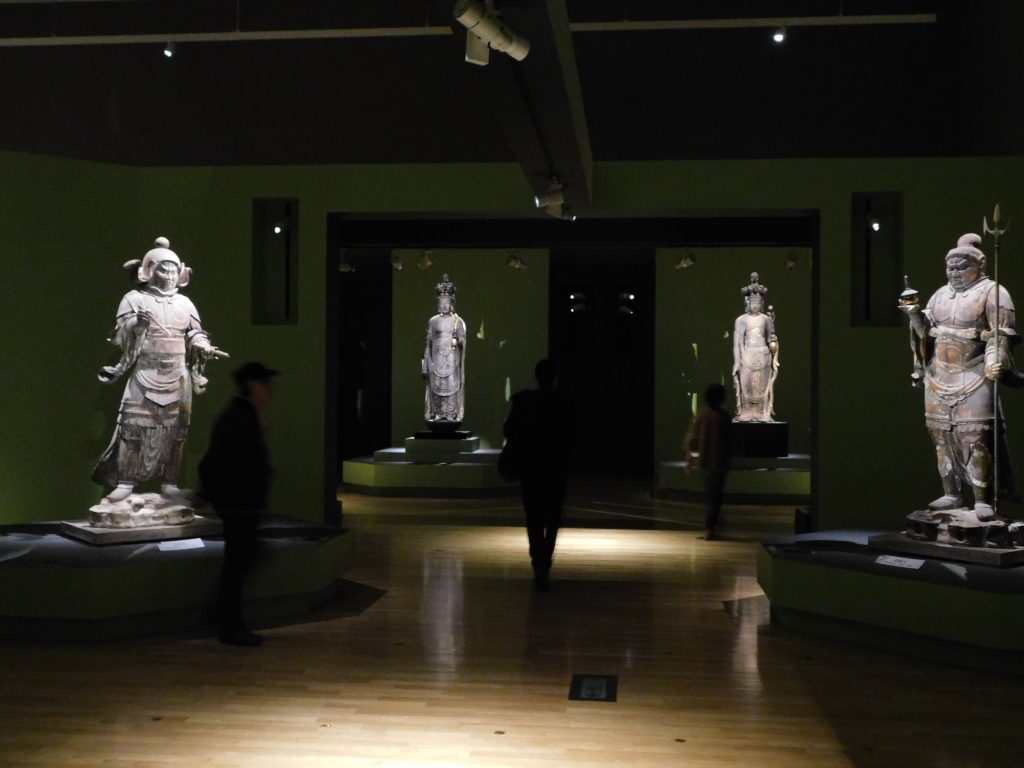 I have reported on the press preview of "The 1300 Nihon Shoki Established Special Exhibition Izumo and Yamato".
A series of works telling the history of Izumo Taisha, a large number of excavated bronze pieces exhibited for the first time in 20 years,
33 triangular green beast mirrors, Buddha statues.
All of these exhibits were full of stimulus, and it was not enough just once, and it was a fulfilling content that I wanted to see again and again.
The preview was really flooded with so many people that it was so hot that you had to wait to see the exhibits.

"Nippon Shoki 1300 Special Exhibition Izumo and Yamato" currently being held at the Heiseikan at the Tokyo National Museum. How about coming to celebrate the 1300 year of Nihon Shoki through experiencing the process of ancient Japan? Is not it? 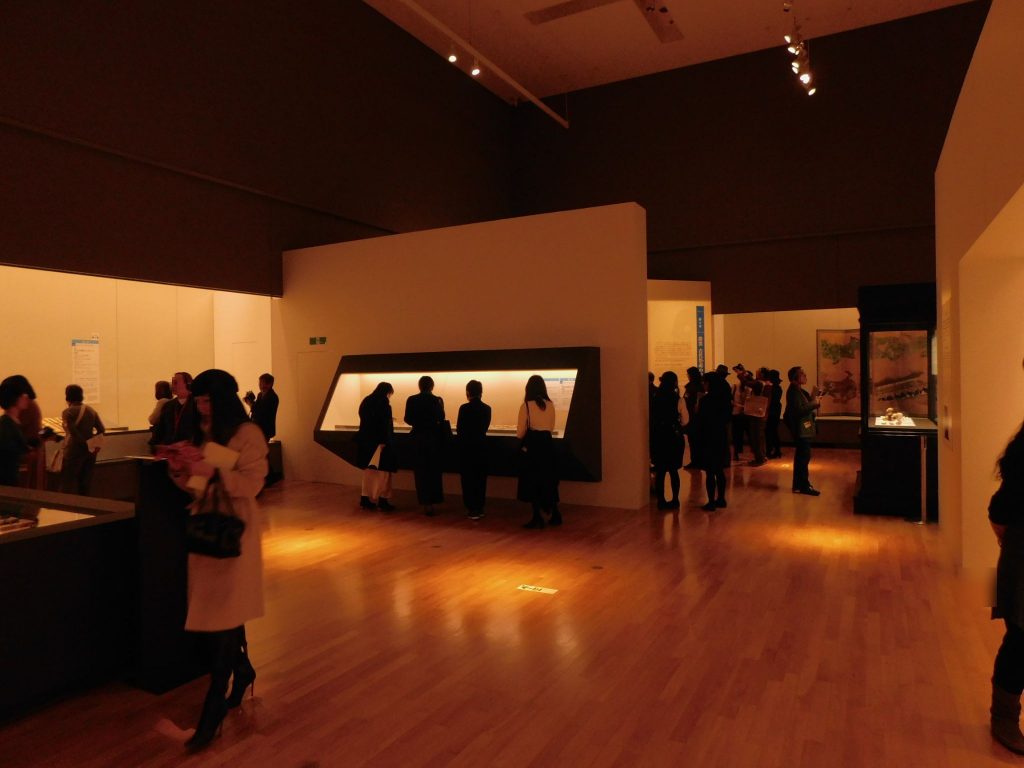 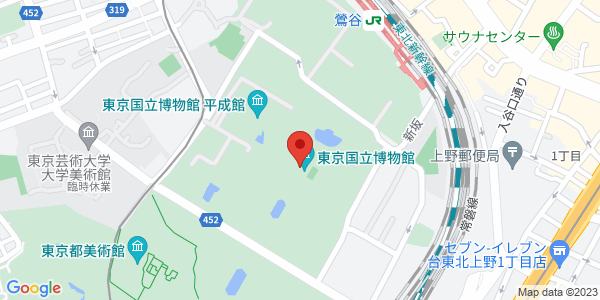