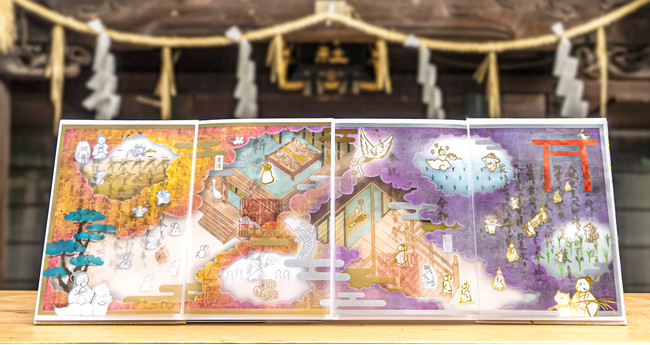 This red stamp is made by connecting two red stamps drawn using the technique of "Genji Monogatari Emaki" and imitating a series of four "picture scroll folding screens".

In October, there will be a "Kannamesai" in the palace, and in November, there will be a "Niinamesai", an important festival to thank for the fruits of this year.
At the time of this festival, the red stamp, which is a sign of worship, was also offered in the form of [4 special red stamps], which connects the patterns of the two festivals for a total of two months.

A red stamp and date are placed on one side, and a congratulatory message is placed on the other side. After stamping on the notebook, a "watermark paper" is attached to make it a special double-layered red stamp.

The "watermark paper" that conveys the state of the festival in an easy-to-understand manner uses the technique of the Heian period masterpiece "Genji Monogatari Emaki," which is also depicted on the 2000-yen bill. In some places, it is studded with homage to picture scrolls.
If you connect the two red stamps, it will turn into a gorgeous folding screen picture scroll with four sides in a row. 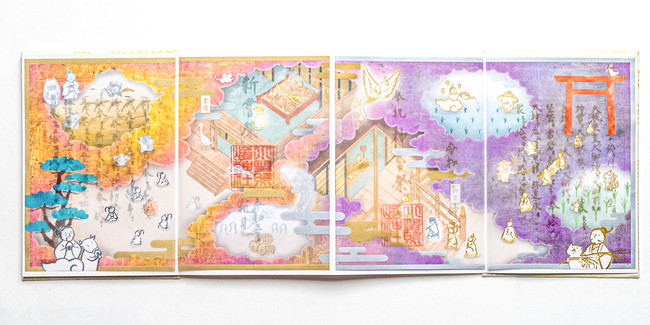 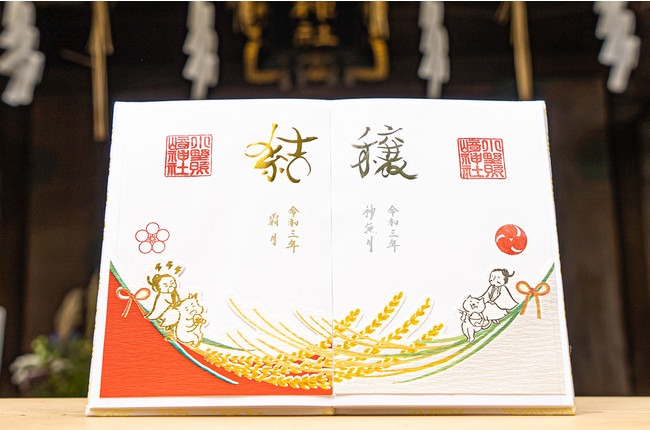 The Miyanaka ritual and the annual festivals of shrines are often closed to the outside, but they are important festivals that form the basis of the country.
We hope that you will feel closer to us through the red stamps and articles. 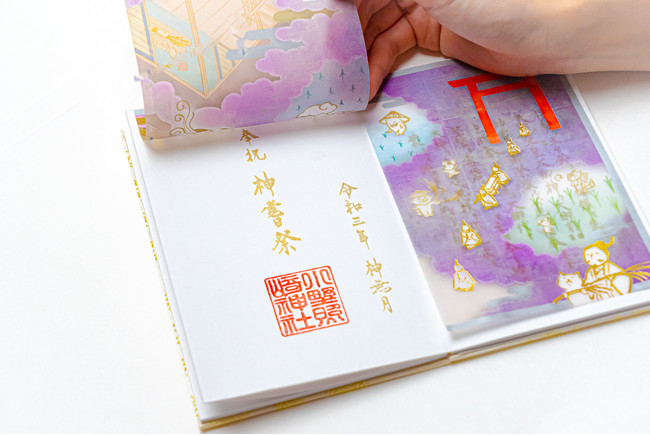 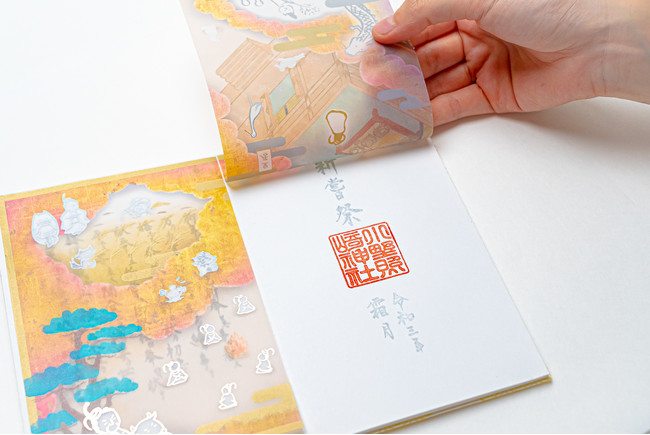 The Japanese have long cherished rice as "food given by God."
There are many festivals and events related to rice throughout the year at the shrines in and around the palace. 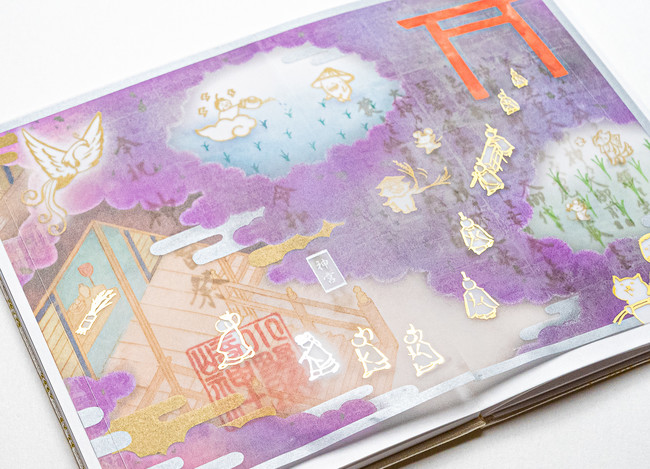 At the "Shinjosai" in October, His Majesty the Emperor harvests rice grown in the Imperial Palace. Prior to the eight million gods, this festival is offered to the Ise Grand Shrine, where Amaterasu Omikami calms down, and the Kashikodokoro, the Imperial Palace, to thank for this year's fertility. 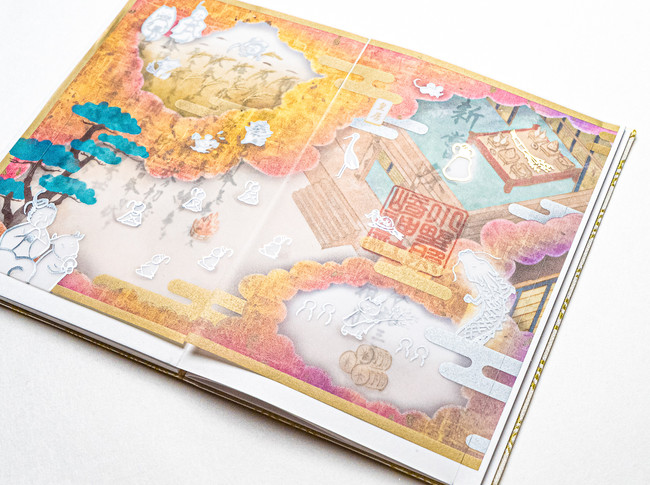 At the "Niiname-no-Matsuri" in November, His Majesty the Emperor himself offers new grains to eight million gods in the palace to thank them for their harvest and to entertain the gods in the ceremony. It is also the most important festival in the annual Miyanaka ritual, where you can deepen your bond by eating offerings together and receive the power of God.

October and November are special months for the shrine, where a national festival to thank for a good harvest in autumn is held for two months.

The Goshuin also conveys the state of the festival in an easy-to-understand picture, and together with this month and next month, we dedicated it in the form of [4 special Goshuin] that connects the two festivals.

The Miyanaka ritual and the annual festivals of shrines are often closed to the outside, but they are important festivals that form the basis of the country.
We hope that you will feel closer to us through the red stamps and articles.

We have prepared "two kinds of red stamps" that change every month with illustrations of Japanese paintings as a sign of "Moon visit". 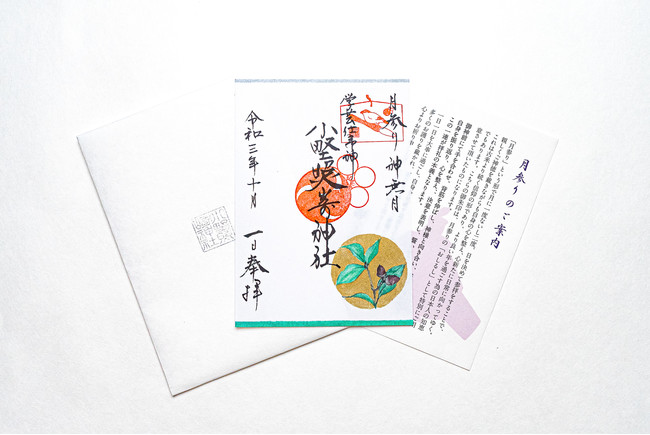 By worshiping on a fixed day once or twice a month in the form of "visiting the moon," you will prepare your own heart while receiving close godliness, and head toward your daily life.

This is the wisdom of the Japanese people to spend a better year, and it is also a form of faith that has continued since ancient times. 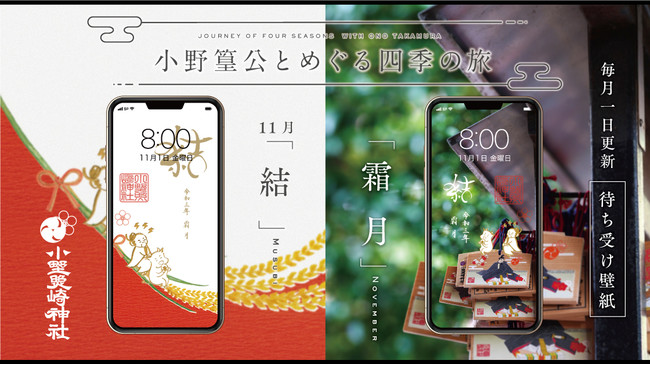 In addition, even for those who have difficulty visiting the shrine every month, we also distribute "two types of standby wallpapers" that change every month for free so that you can feel the shrine in your daily life.

As it is a shrine that enshrines the god of arts and entertainment , it has an elaborate taste that you can enjoy every month.

I hope that this month will be a healthy time for you to feel the calm autumn weather and to join hands in your worship.

We pray for your good health. 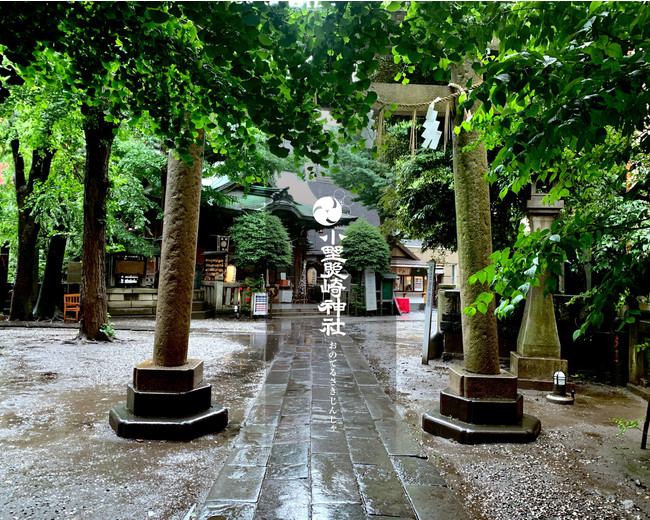 A shrine located in Iriya, Taito-ku. It enshrines Ono no Takamura, a politician and multi-artist in the early Heian period, as a deity. It was founded in Terusaki Ueno in 852, and was relocated to its present location in the Edo period with the construction of Kaneiji Temple. "Fujizuka" built from lava carried from Mt. Fuji, which is enshrined in the precincts, is designated as an important tangible folk cultural property. General worship is possible at the annual festivals on June 30th and July 1st, which coincide with the opening of Oharae and Mt. Fuji. The main shrine escaped the two great fires of the Great Kanto Earthquake and the Great Tokyo Air Raid, and the front part is said to be from the late Edo period.
The annual festival is held on the weekend closest to May 19th every year.

It is also known as a shrine related to the late Atsumi Kiyoshi, a national actor. When Mr. Atsumi was still unknown, he asked for a role because he would cut off smoking. Immediately after, there is an anecdote that was selected as the leading role in the movie "Otoko wa Tsuraiyo" series.