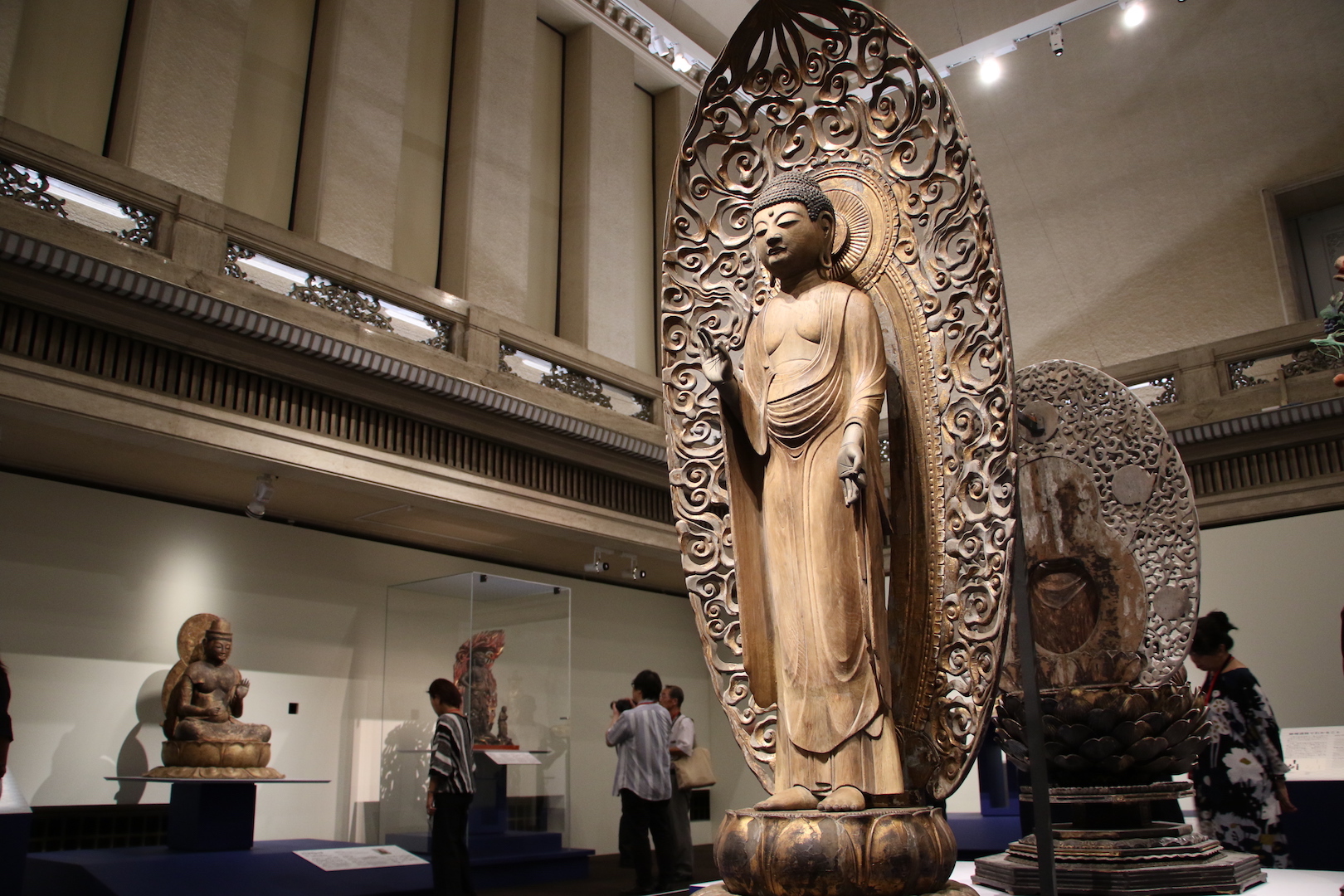 Tokyo National Museum Main Hall Special Rooms 4 and 5 will hold a special event “Cultural Assets, Forever” commemorating the 30th anniversary of the Sumitomo Foundation Restoration Grant from October 1 (Tuesday) to December 1 (Sunday), 2019 . It has been.
A media preview was held, and this time we will deliver it.

Precious cultural assets that have been passed down for a long time and convey the spirit of the nation to the present. In addition to the vulnerability of materials and structures, it is not easy to pass on cultural assets to the next generation in this country, such as natural disasters such as high temperature and humidity, earthquakes and storms and floods.
However, the Sumitomo Mitsui Foundation has been involved in the restoration of cultural properties since the foundation of its foundation, which has established “Self interest and other public and private interests” (to conduct projects that benefit the nation and society) as its foundation. We have been subsidizing the outside cultural property restoration project.

This exhibition commemorates the 30th anniversary of the Sumitomo Foundation and exhibits some of the cultural assets that have been restored through grants. Introducing a number of valuable works such as Buddha statues revived by traditional techniques and the latest science. 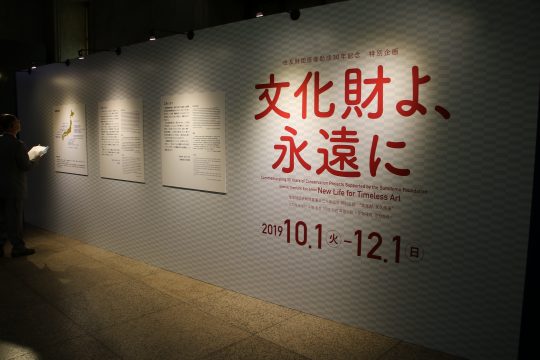 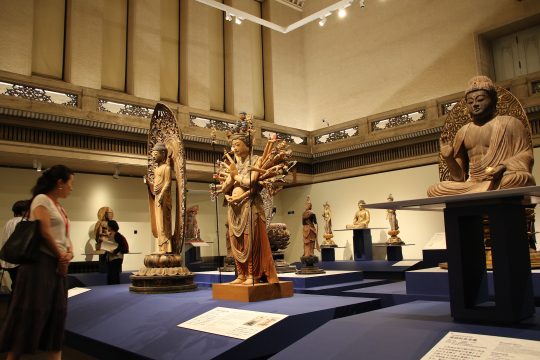 Precious Buddha statues lined up, such as an important cultural property, the statue of Kannon Senju 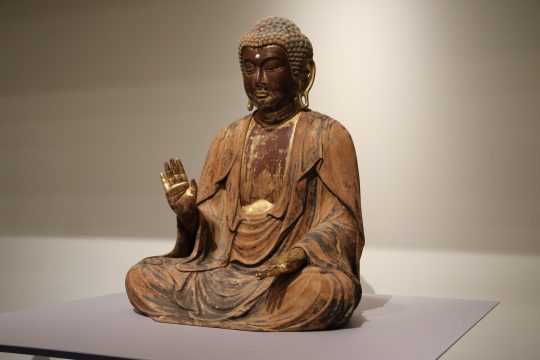 The Fukushima and Buddhist Buddha Buddha's Buddha statues that were damaged by the Great East Japan Earthquake (among the three Buddha statues of the Shakyamuni), Kamakura period, 14th century 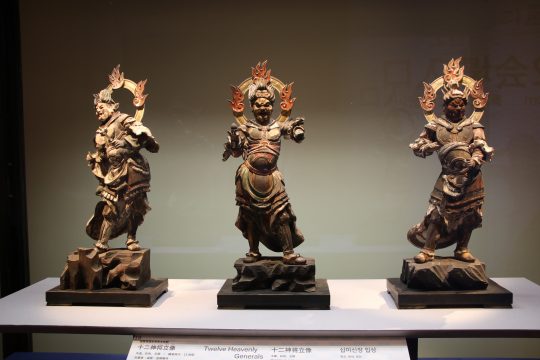 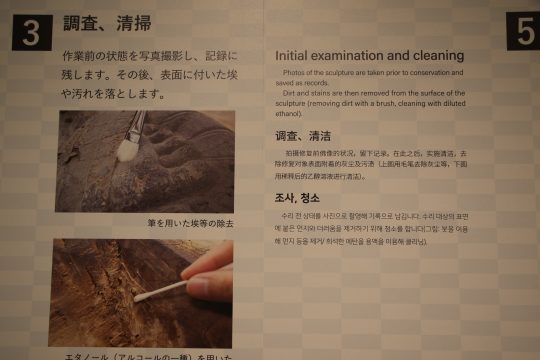 As you enter the venue, Buddha statues from all over Japan stand in a large space, creating a quiet atmosphere.
In fact, all these Buddha statues are “revitalized” by repairs.
All of them are Buddha statues that have passed through nearly a thousand years. Although there have been various disasters such as deterioration of lacquer and glue that glues wood, peeling of colors, damage by insects, and sometimes earthquakes and floods, it has been repaired several times and has remained in its original form It is.

The panel in the venue introduces the frontline of “Beauty Protection”, including the sculpture repair process. It is structured so that you can pay attention to the background "story" as to what process each work goes through. 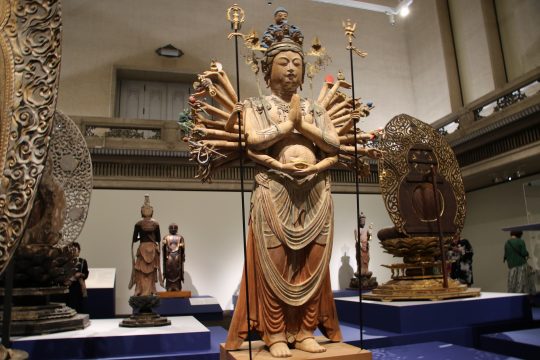 Senju Kannon statue passed down to the Wakasa region of Fukui Prefecture, where Buddhist culture flourished through exchanges with the capital. Made with Ichiki's technique, it is characterized by its harsh appearance and rich flesh with hips and abdomen.
All 40 armpits were remade in each era, and during the repairs of the early modern period, the body was painted in white and the facial expression was not well visible.
However, in modern repairs, the basic principle is “maintain the status quo”, but in Heisei repairs, the color is removed and the face is renewed so that the modeling at that time can be understood. Regarding the armpits, the repair history seems to be the history of the Buddha statue, and after repair it seems to have been rejoined.

The repair work is “case-by-case”, and it is a work that conveys part of the difficulty. 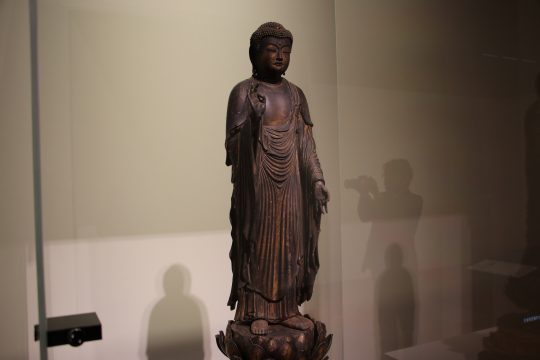 This statue was presented in 1958 for the exchange of cultural assets between the Far Eastern Academy of France, which at that time ruled the Indochina Peninsula, and the Tokyo National Museum.
At the time of discovery, in addition to damage due to aging, adhesives are used to fix the statue and the pedestal (!). It was. Therefore, a Japanese engineer visited the Vietnamese National History Museum, the current owner, and carried out repairs. I was able to get back to the original.

With this exhibition, he will return to Japan for the first time in 76 years. 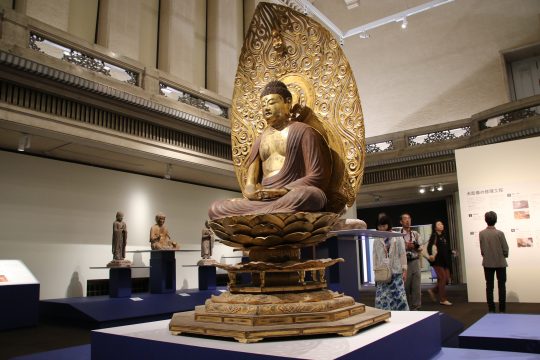 This is a statue of Amida Nyorai in Manganji Temple, Tochigi Prefecture, with the brilliant sculpture of golden inscriptions. Slightly warped posture and soft expression of clothing lines are impressive.
The back of the light is a part that is easily damaged, but in this image, the connection with the pedestal was unstable and it was dropped and damaged. In the repair work, all the parts were disassembled and rejoined, and it was further reinforced with stainless steel or brass. 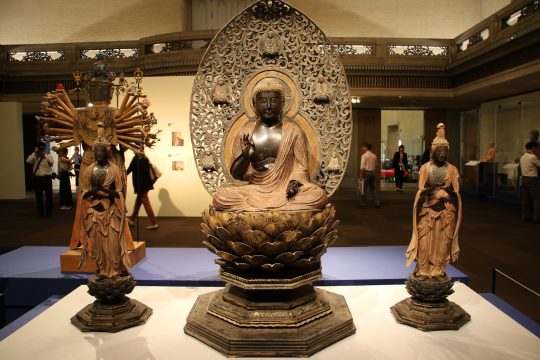 A Buddha statue that is quietly enshrined all over Japan.
It is filled with the wishes of the local people for their sickness and the heart of prayer dedicated to the Buddha in various scenes.
“The difference from the restoration of paintings is that the statue is the object of worship. In the case of the Senju Kannon image, there is a problem if the hand is missing. It's something that local people have been protecting and telling, so I think that repairs in the form of those people are required. "
Mr. Sarai, the director of the Tokyo National Museum, Heisei Exhibition Coordination Office, told us like that.

A number of gems revived by the world's highest level of restoration technology.
Sumitomo Foundation Restoration Grant 30th Anniversary “Cultural Property, Forever” is held until Sunday, December 1, 2019.
Why don't you touch the people's “heart of prayer” at the venue? 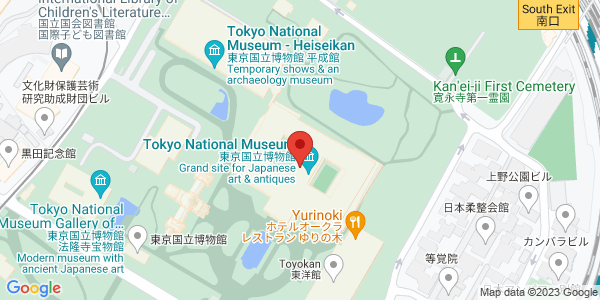