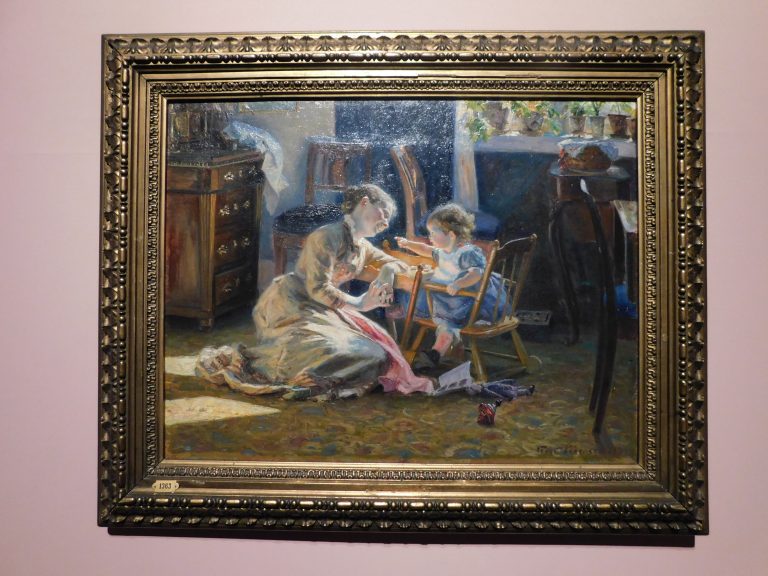 (Until Thursday, March 26, 2020) At the Tokyo Metropolitan Art Museum in Ueno, "Hamashui and Danish Painting" is being held.
Prior to the event, there was a news preview the other day, so I will report on the situation.
Related articles here!

Denmark is a constitutional monarchy in Northern Europe with a population of about 5.81 million.
The country name is derived from Dummelk, which means Old Norse (= Dane land), and is well known as a renewable energy advanced country and a high welfare state.
In recent years, their lifestyle has also attracted a great deal of attention, including being ranked number one in the United Nations' World Happiness Rankings.
In relation to Japan, we celebrated the 150th anniversary of diplomatic relations in 2017.
The exhibition introduces some of the works of Denmark's Wilhelm Hamashuy (1864-1916) and the surrounding works of Nordic art.

Wilhelm Hamashuy (1864-1916), one of the leading painters of Danish painting in the late 19th century.
Hamashui begins drawing lessons at the age of eight.
After studying painting at the Royal Academy of Fine Arts in Copenhagen, Denmark, at the age of 15, he made his debut in "Portrait of Sister Ana" (1885) at the age of 21.
In the early days, I liked landscape paintings and portraits in the early days, but since the 1890s I have been drawing a lot of indoor paintings.
Strangerse 30 in the old town of Copenhagen, who moved when he was 34 in 1898.
A series of quiet and calm works depicting the apartment have won high acclaim both in and outside Denmark.
The work attracted Diagilehu of ballet Ruth and Rilke, a German poet.
It was called "Northern Vermeer" and attracted attention. 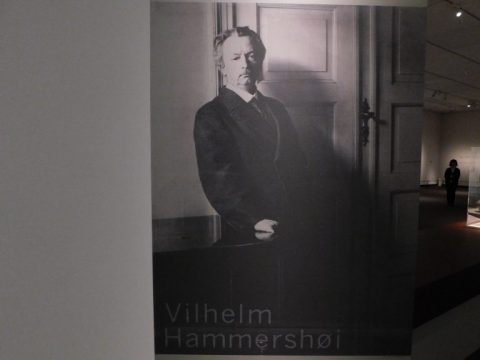 There are four highlights of the Hamashui and Danish painting exhibition.

① About 40 Hamashui works will be gathered

Approximately 40 Hamashui works, including the first in Japan, will be gathered at the Tokyo Metropolitan Art Museum.
More than 10 years after the 2008 exhibition, Hamashui works, also called "Northern Vermeer", will return to Japan.
Please enjoy one side of that unique talent.

The golden age of Danish painting, which opened in the early 19th century in Copenhagen, the center of Nordic art.
From pure and rustic works of that era to beautiful Skayne works incorporating the impressionist-style depiction of light, and the works of painters who played active roles in the capitals of the end of the century, drawing characteristic interior paintings. to introduce.

Hygge means "relaxing" and "comfortable atmosphere" and is a very important Danish value.
It is the highlight of the exhibition that you can touch the Danish values.
The work of Danish painters in the late 19th century draws on Hyge, the beautiful Nordic nature, the people who live there, and the families who spend their time in a calm space.
By touching the Hughes in the works, you will be reminded of what we really want to value in life.

Here are some of the highlights from each chapter.

"A girl with a fruit basket"

A work by Constantine Hansun, son of Hans Hanson, a portrait painter.
This work is also famous for being later owned by Hamashui, and it seems that it was displayed on Strangese 25, where he spent his later years.
Is the whole work emitting a strong light, despite its subdued colors, due to the strength of the girl's gaze looking straight at it? 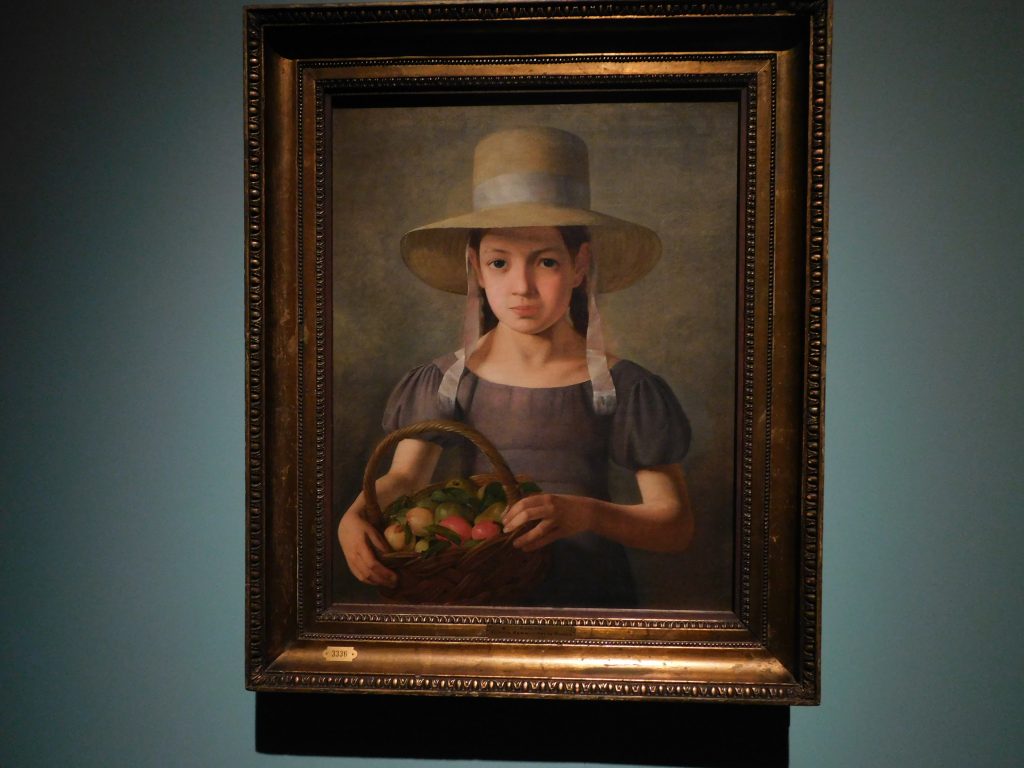 Constantine Hansun, Girl with a Fruit Basket, circa 1827 Oil on canvas National Gallery of Denmark

Wilhelm Maastran was born in Copenhagen and studied at the Royal Academy of Fine Arts, depicting the wife of Michelle Lafenbär, a prominent Danish tax official.
Rafenbea's wife, stretching her back and staring straight at me.
Its elegant appearance is a mixture of strength and tenderness.
St. Peter's Basilica, which can be seen outside the window, also enhances this work. 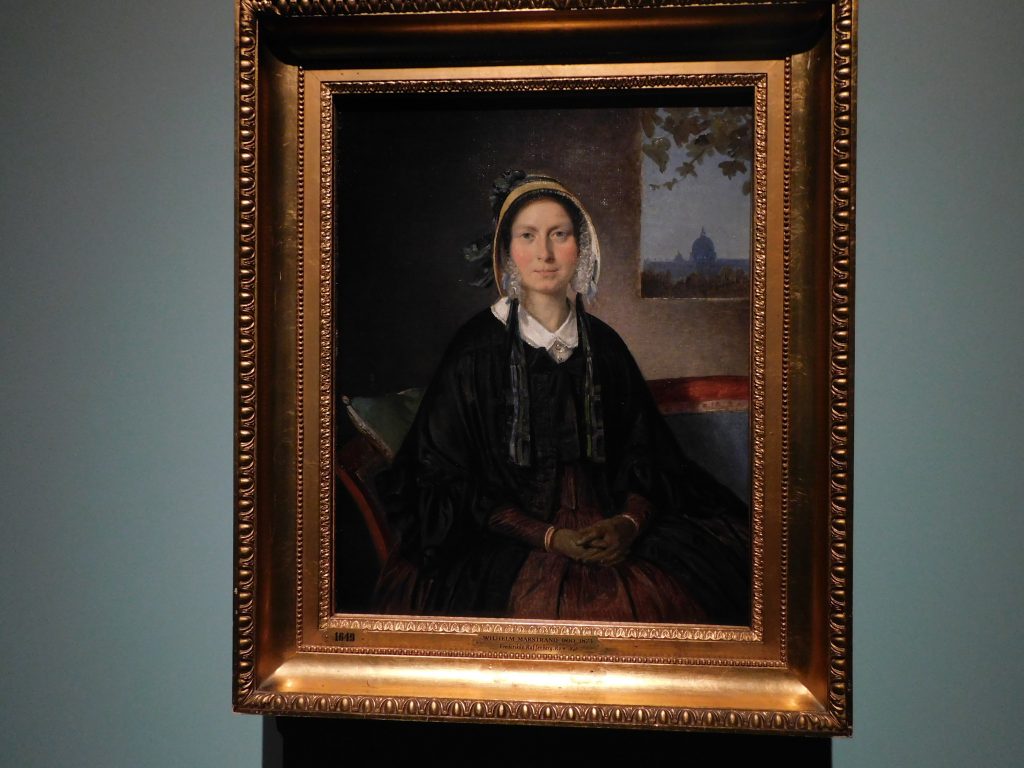 A work by Michel Anga, famous as a painter representing Skain schools.
Fishermen in life jackets pushing a boat with a rugged look and going to the sea.
What is going on?
A tense situation ahead of the fishermen and the people watching it.
The intensity of the waves is increasing steadily.
It is a work with a sense of tension that is nervous and throbbing until you see it. 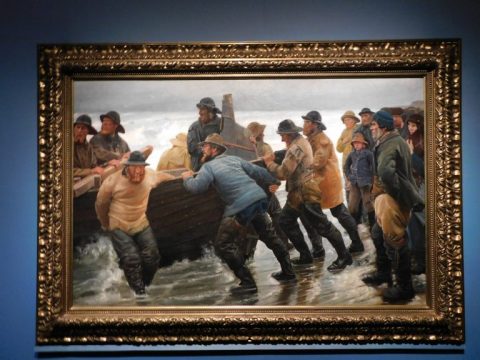 This is also the work of Michel Anga.
Unlike the work depicting the tense situation of fishermen,
The meadow has a gentle time that lasts forever.
The girls picking flowers and their mother watching them under the everlasting blue sky.
The blue, pink, yellow, and greenery of the flowers are covered by a large sky. 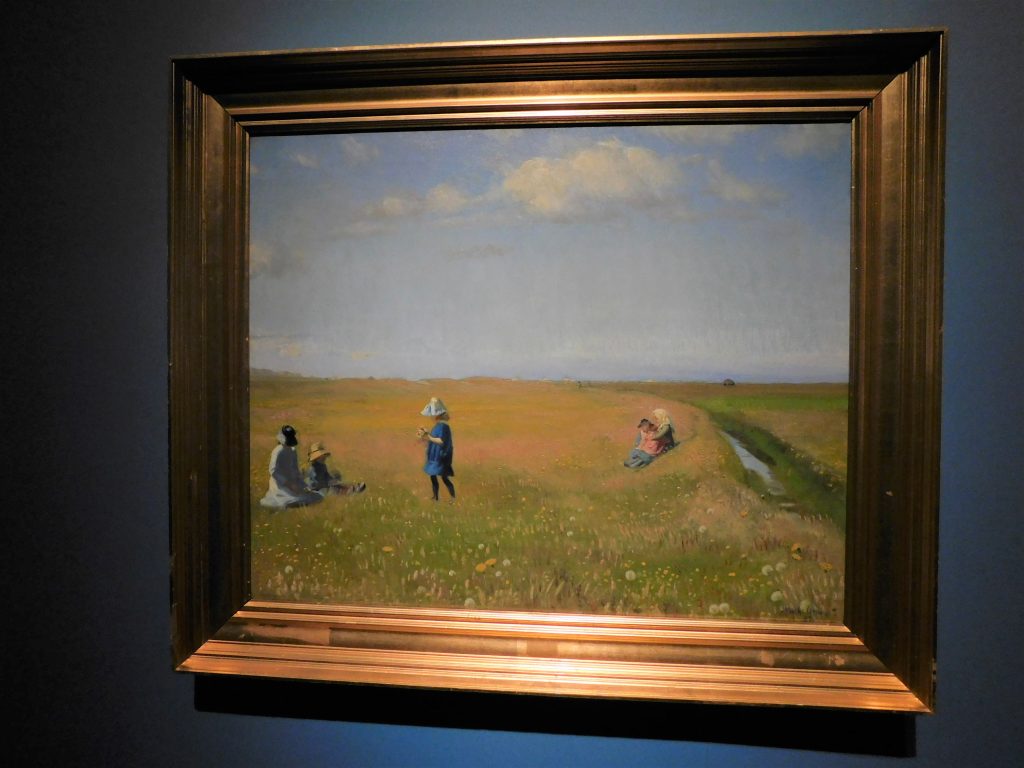 A work by Viggo Pedasson, whose father is Wilhelm Pedasson, an Andersen fairy tale illustration artist.
A work depicting Vigo's wife, Ilisabeto, easing her little daughter in the living room at home.
The gentle face of his wife who cares for her daughter and the face of her young daughter who loves moms are very dear.
It seems that even the expression of Vigo, drawing while smiling, is transmitted here. 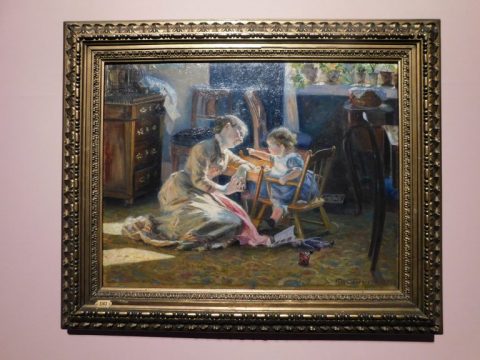 A work by Crestian Moaié-Pidasun, who has been in France, the Netherlands and Belgium, and is also famous for his friendship with Van Gogh in Arles.
The composition is very similar to Van Gogh's "To Memories of Mauffet" and is believed to have been painted a few meters from where Van Gogh drew.
I was drawn into the gorgeous colors of the peach blossoms.
When approaching a little, the gentle scent of peach blossoms seems to be faintly transmitted. 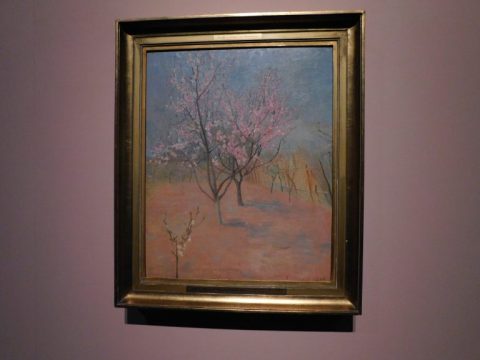 This is a work by Wilhelm Hamashoe depicting a room facing the courtyard of Strangese 30.
The light in the room coming through the elongated lattice window appears to drift steadily.
I imagine that if you open the window, the dazzling outside world is waiting.
The contrast between this bright outside world and the closed dark door is also exquisite.
Which is real and which is unreal? 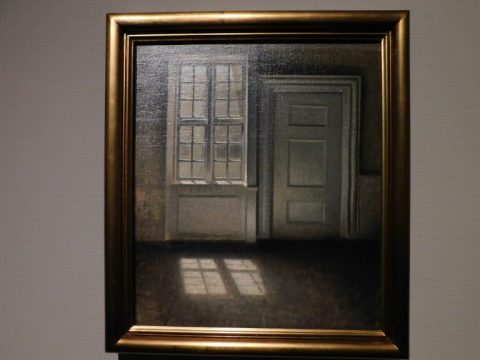 A work depicting the bedroom of Wilhelm Hamashuy of Labex Ali.
Two curtains hanging on the room
The light coming in from here is very soft.
Due to the light, the woman's profile looking out of the window seems to be smiling somewhere. What are you looking at?
A purple vase placed in the center of the window tightens the interior painting. 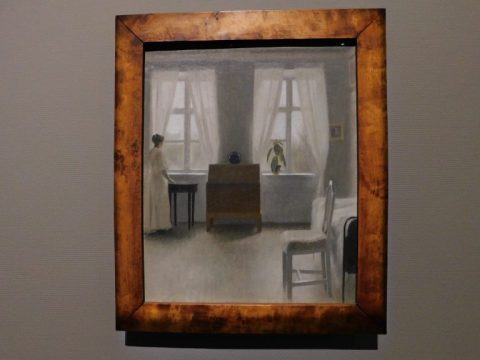 I have reported on the press preview of "Hamashui and Danish Paintings".
After more than 10 years, Hamashui's works and other Danish paintings have reunited in Japan.
By touching these Danish works and cultures at the exhibition, you will discover new perspectives and values.
This exhibition is a valuable opportunity to introduce the first Danish painting in Japan at once.
Why don't you visit the "Hamashui and Danish Paintings" at the Tokyo Metropolitan Art Museum? 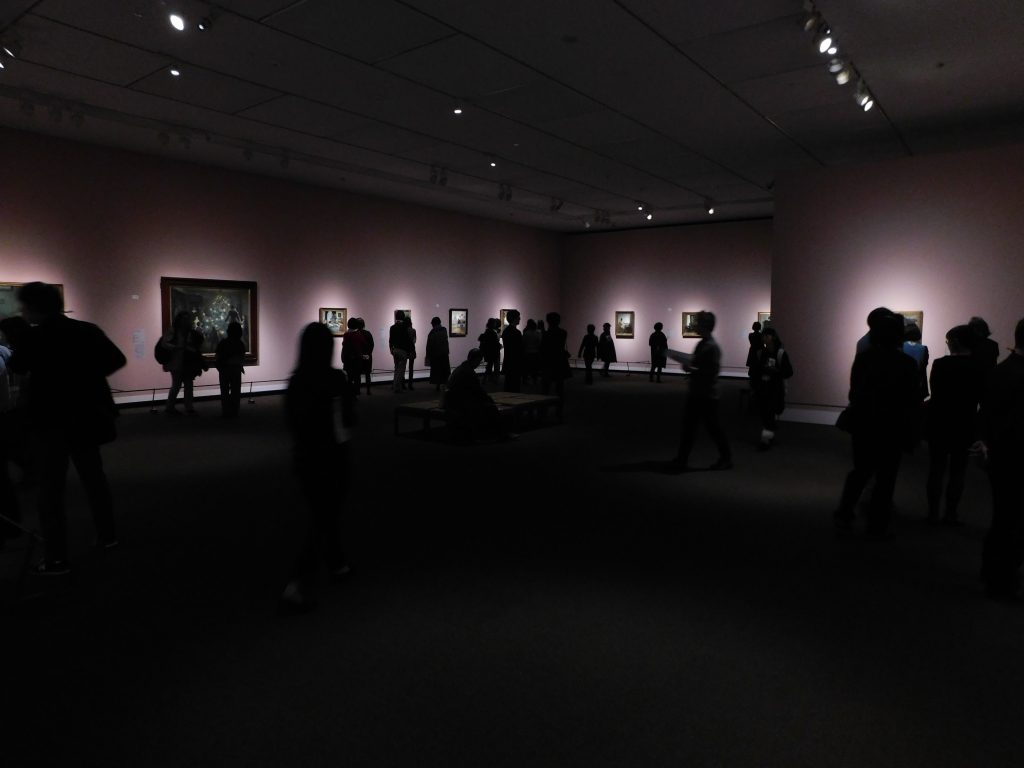 At the venue, many people were eager to appreciate the work 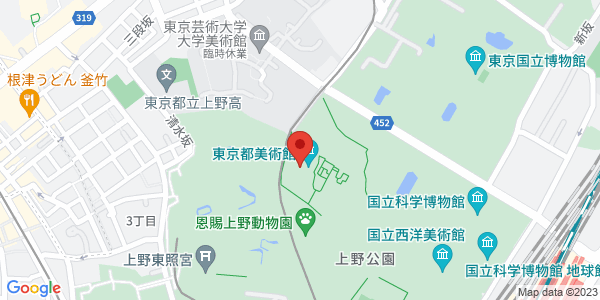